However, some critics of the Church assume that Joseph explicitly named the personages as the Father and the Son. One good example of such an assumption is a "mormoninfographic" that, in its effort to illustrate contradictions between Joseph's account of the First Vision, erroneously indicates that the words "God the Father" and "Jesus Christ" actually appear in Joseph's 1838 account. This is for the purpose of contrasting the lack of mention of the Father and the Son by name in the 1835 account.

When challenged on this error, the author of the graphic said regarding the 1835 account: "you seem to be suggesting that I should depict something other than what is in the written record. There's nothing in the 1835 account that would indicate God or Jesus only what you are inferring from other accounts." [1] Indeed, there is no explicit mention of God the Father and Jesus Christ in the 1835 account, but Joseph reports that one of the personages that appeared "testified unto me that Jesus Christ is the Son of God."

The only way to identify the personages in the 1838 account as Father and Son is to use an external source: The Holy Bible contains the phrase "this is my beloved Son"

So, where in the 1838 written record do the names "God the Father" and "Jesus Christ" appear? Nowhere: in the 1838 account Joseph refers to them as "personages." Yet, the author of the graphic "check marked" two items that are not present in the written record.

We agree that that "This is my beloved son" implies that the personages are God the Father and Jesus Christ, but the only way to infer that is to look at something that is not in the written (1838) record - you have to use the Bible (the account of Jesus' baptism) to make the connection. Therefore, allowing an additional record to be used to clarify Joseph's written words from 1838 violates the author's own rules: He won't allow Joseph's words from the other accounts to used to to clarify, yet he allows the Bible to be used to clarify. 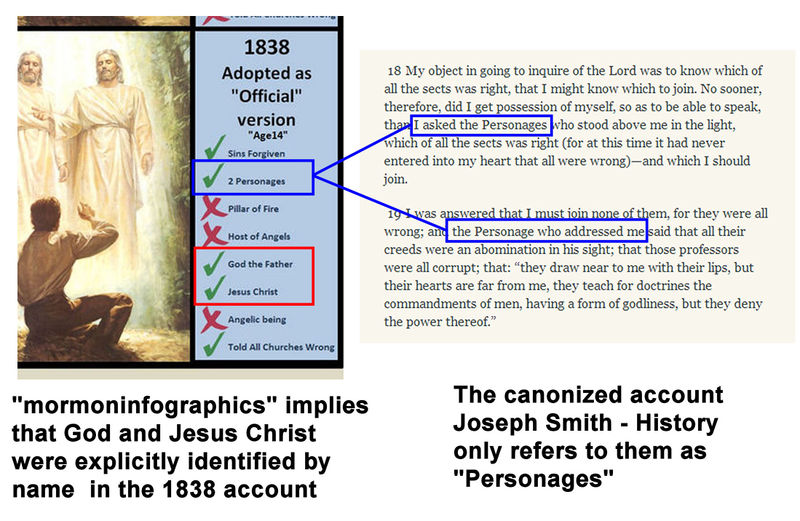