Summary: Some critics have made comparisons between the Book of Mormon witnesses and witnesses to other events in order to discredit the testimony of the former. These articles examine these comparisons. 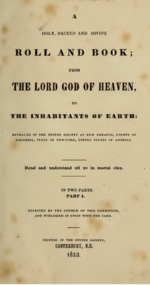 Cover of Philemon Stewart's A Holy, Sacred, and Divine Roll and Book. Click to enlarge. Click here to read for free online.

One critic of the Church asks how we can believe in the Book of Mormon witnesses and not the witnesses to Philemon Stewart's A Holy, Sacred and Divine Roll and Book; From the Lord God of Heaven, to the Inhabitants of Earth (hereafter Holy Roll).[1] The critic mistakenly attributes authorship for the book to Ann Lee: founder of the Shaker movement during the late 1700s.[2] However, "[the book] was written in 1843, and Ann Lee died in 1784. The book came out during a period in Shaker history known as the Era of Manifestations, wherein multiple people claimed visionary experiences and revelations that they believed were being sent to them by Ann Lee, who they believed was a secondary Christ figure. This era occurred between 1837 and the mid-1850s. It was such a confusing time that many members didn’t know what was actual revelation and what was hallucination.[3] Those 'visions' were being used to 'expose sins' of others and force them out of the community[.]"[4] The book "contains moral counsel, biblical quotations, historical observations, and theological reflections, all represented as the product of spirit revelation."[5] One can read the book for free online at this link. Stewart claimed that on May 4, 1842, an angel named Al'sign te're Jah' appeared to him and led him to a fountain named the Holy Fountain at New Lebanon. The fountain was located at a site called Holy Mount where, three days prior on May 1, the Shakers had celebrated the first passover feast. There, Stewart claimed to have scribed the revelation as dictated by the angel over the course of fourteen days for six hours a day. The original version totaled over 400 pages. The first 200 or so pages of the book is the revelation as delivered by the angel. The other 200 or so pages document more than ninety testimonies attesting to the authenticity of the book and other things. The individuals who gave these testimonies claim to have witnessed different things. Some witnesses don't compare at all with what the Book of Mormon witnesses saw while others compare more closely. For instance, eight women give their names and testify that they saw the angel that appeared to Stewart holding the Holy Roll while on top of a house. How should a person claim that the Book of Mormon witnesses are superior to the witnesses to Philemon Stewart's book?

The Divine Roll and Book Fell out of Favor with Leaders, Members, and Witnesses of the Shaker Movement

The first point is made succinctly by Book of Mormon scholar Matthew Roper. He responded back in 1993 to the same criticism as made by Gerald and Sandra Tanner. He wrote:

The Tanners attempt to downplay the significance of the witnesses’ written testimony by noting similarities between it and several nineteenth-century Shaker writings in which some Shaker believers claimed to have seen angels and visions. “Joseph Smith only had three witnesses who claimed to see an angel. The Shakers, however, had a large number of witnesses who claimed they saw angels and the book. [In Shaker writings,] there are over a hundred pages of testimony from ‘Living Witnesses.’“[6] But the quantity of witnesses has little meaning if those witnesses afterwards admit that they were wrong. Unlike the Book of Mormon, the Shaker Roll and Book afterwards fell into discredit and dishonor among the Shakers themselves and was abandoned by its leaders and most believers,[7] while the Book of Mormon continued to be a vitally important part of Mormon scripture to which each of the witnesses, including Martin Harris, continued to testify, even while outside of the Church.[8]

It should be emphasized that this discredit and skepticism among believers in the Shaker movement was quick. In fact, it started during the printing and publication process of the Holy Roll. The late American religious historian Stephen J. Stein in his book The Shaker Experience in America observes that the Shakers believed that sacred scripture could be produced through revelation of dead spirits (a belief known as spiritualism) to "instruments" or "visionists": mortal people and followers of the Shaker movement. When revelation was claimed to be produced in the name and authority of the instruments or visionists themselves and not the spirits, that revelation's authenticity was questioned. This questioning and skepticism was directed towards Stewart's Holy Roll, "no doubt fueled by personal animosities toward" Stewart himself.[9] Stein observes in another presentation (and probably the best source of information on the Holy Roll) that the Shaker society's leaders accused Stewart of "elevating his own role in the revelation and for soliciting too many testimonies in support of it" as well as "self-enhancement and of a lack of humility." Stewart's book, along with the testimonials of the other visionists attesting to the book's divinity, was published in 1843. Stewart wrote to the ministry at New Lebanon, NY asking them to reprint the Holy Roll in 1848—a request that was not pursued further by the Shakers. Stewart, in time, became a critic of the establishment's leadership and remained so until his death in 1875.[10] In 1874 (31 years after the Holy Roll was published), Charles Nordhoff was told by one of the Shaker elders that the best use for copies of the Holy Roll was to burn them.[11] So whatever the testimony and visitations of these visionists that gave their names to Stewart's revelation were, it apparently wasn't enough to convince them to remain committed to stalwartly defending that testimony. The only one that appears to have remained committed to the book's authenticity was Stewart.

Comparison of the Different Testimonies

When comparing the testimonies of the experiences of the Book of Mormon Witnesses and the Shaker witnesses, Brian Hales offers this easy-to-read chart: 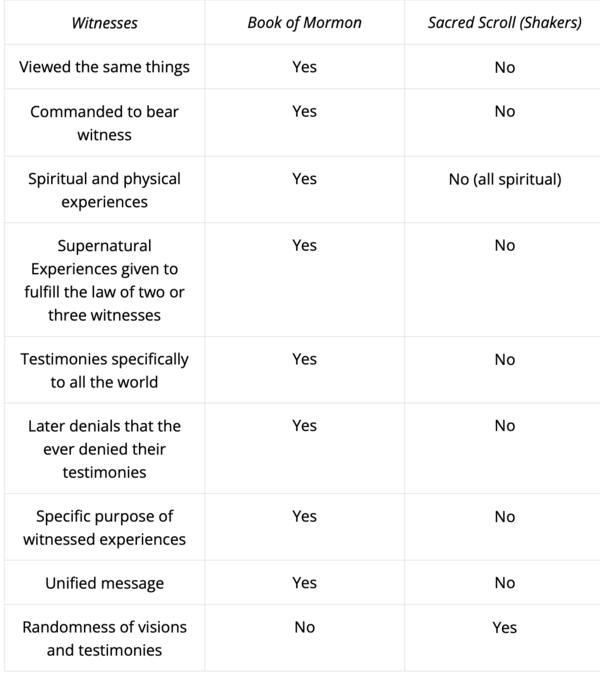 A comparison of the Book of Mormon witnesses and Philemon Stewart's witnesses. Courtesy of Brian Hales.

The Shakers are a Now Defunct and Discredited Religious Movement

As author Jim Bennett observed about this criticism:

So we shouldn’t accept the testimony of Book of Mormon witnesses because the Shakers, who no longer exist and who’s central claims have been completely discredited by the passage of time, claimed to see angels? How is that anything but a non sequitur? Each testimony should be evaluated on its own merits. As it stands, the Shakers no longer exist, so I don’t see much value in reviewing their testimonies.[12]

Assuming that the Shaker Testimony is Actually True

Let's assume that the Shaker testimony is true and the Holy Roll actually did have divine origins, does that really impinge on the witnesses credibility? Of course not! That some people claim to see one thing is not evidence that others can't see and experience something different. To say otherwise is just a non-sequitir.

Additionally, Latter-day Saints are open to other people having spiritual manifestations, revelations, and visions in other religions. The prophet Nephi in the Book of Mormon teaches that God has inspired the production of many religious books.[13] Along similar lines, the prophet Alma teaches that “the Lord doth grant unto all nations, of their own nation and tongue, to teach his word, yea, in wisdom, all that he seeth fit that they should have; therefore we see that the Lord doth counsel in wisdom, according to that which is just and true.”[14] Additionally, the Book of Alma teaches that the Spirit of God can be poured out on non-covenant people so that their hearts can be softened and thus prepared to receive the Gospel.[15] Doctrine & Covenants teaches that "we believe religion is instituted of God[.]"[16] Other biblical scriptures clearly indicate that God inspires other groups outside of his covenant group with truth, light, and miracles.[17] A 1978 official statement from the First Presidency of the Church states that "[t]he great religious leaders of the world such as Mohammed, Confucius, and the Reformers, as well as philosophers including Socrates, Plato, and others, received a portion of God’s light. Moral truths were given to them by God to enlighten whole nations and to bring a higher level of understanding to individuals."[18] Latter-day Saints could accept at least some of the visions of the Shakers without having to feel that any of their theological commitments are being compromised.

It's clear that comparisons between the Book of Mormon witnesses and the witnesses to Philemon Stewart's book intended to discredit the former are likely going to be guilty of the false equivalency logical fallacy. Even if we are to accept the truthfulness of what the Shaker witnesses claimed, it does not need to be threatening in any way to the credibility of the Book of Mormon witnesses nor any of the theological commitments held by orthodox Latter-day Saints.