Question: Did Joseph Smith originally identify the angel that visited him as "Nephi" instead of "Moroni"?

Question: Did Joseph Smith originally identify the angel that visited him as "Nephi" instead of "Moroni"?

The text in question

The text in question reads as follows:

While I was thus in the act of calling upon God, I discovered a light appearing in the room which continued to increase untill the room was lighter than at noonday and <when> immediately a personage <appeared> at my bedside standing in the air for his feet did not touch the floor. He had on a loose robe of most exquisite whiteness. It was a whiteness beyond any <thing> earthly I had ever seen, nor do I believe that any earthly thing could be made to appear so exceeding[g]ly white and brilliant, His hands were naked and his arms also a little above the wrists. So also were his feet naked as were his legs a little above the ankles. His head and neck were also bare. I could discover that he had no other clothing on but this robe, as it was open so that I could see into his bosom. Not only was his robe exceedingly white but his whole person was glorious beyond description, and his countenance truly like lightning. The room was exceedingly light, but not so very bright as immediately around his person. When I first looked upon him I was afraid, but the fear soon left me. He called me by name and said unto me that he was a messenger sent from the presence of God to me and that his name was Nephi....(emphasis added)[1]

The discrepency in the history … may have occurred through the ignorance or carelessness of the historian or transcriber. It is true, that the history reads as though the Prophet himself recorded [it, that he] was [doing the] writing: but … many events recorded were written by his scribes who undoubtedly trusted too much to their memories, and the items probably were not sufficiently scanned by Bro. Joseph, before they got into print.[2]

The Church teaches that Moroni was the heavenly messenger which appeared to Joseph Smith and directed him to the gold plates. Yet, some Church sources give the identity of this messenger as Nephi. Some claim that this shows that Joseph was 'making it up as he went along.' One critic even claims that if the angel spoke about the plates being "engraven by Moroni," then he couldn't have been Moroni himself.

The identity of the angel that appeared to Joseph Smith in his room in 1823 and over the next four years was known and published as "Moroni" for many years prior to the publication of the first identification of the angel as "Nephi" in the Times and Seasons in 1842. Even an anti-Mormon publication, Mormonism Unvailed, identified the angel's name as "Moroni" in 1834—a full eight years earlier. All identifications of the angel as "Nephi" subsequent to the 1842 Times and Seasons article were using the T&S article as a source. These facts have not been hidden; they are readily acknowledged in the History of the Church:

In the original publication of the history in the Times and Seasons at Nauvoo, this name appears as "Nephi," and the Millennial Star perpetuated the error in its republication of the History. That it is an error is evident, and it is so noted in the manuscripts to which access has been had in the preparation of this work. [3]

Joseph F. Smith and Orson Pratt understood the problem more than a century ago, when they wrote in 1877 to John Taylor:

"The contradictions in regard to the name of the angelic messenger who appeared to Joseph Smith occurred probably through the mistakes of clerks in making or copying documents and we think should be corrected. . . . From careful research we are fully convinced that Moroni is the correct name. This also was the decision of the former historian, George A. Smith." [4]

The timeline of events related to the "Nephi/Moroni" error

The following time-line illustrates various sources that refer to the angel, and whether the name "Moroni" or "Nephi" was given to them.

As can be readily seen, the "Nephi" sources all derive from a single manuscript and subsequent copies. On the other hand, a variety of earlier sources (including one hostile source) use the name "Moroni," and these are from a variety of sources.

Details about each source are available below the graphic. Readers aware of other source(s) are encouraged to contact FairMormon so they can be included here. 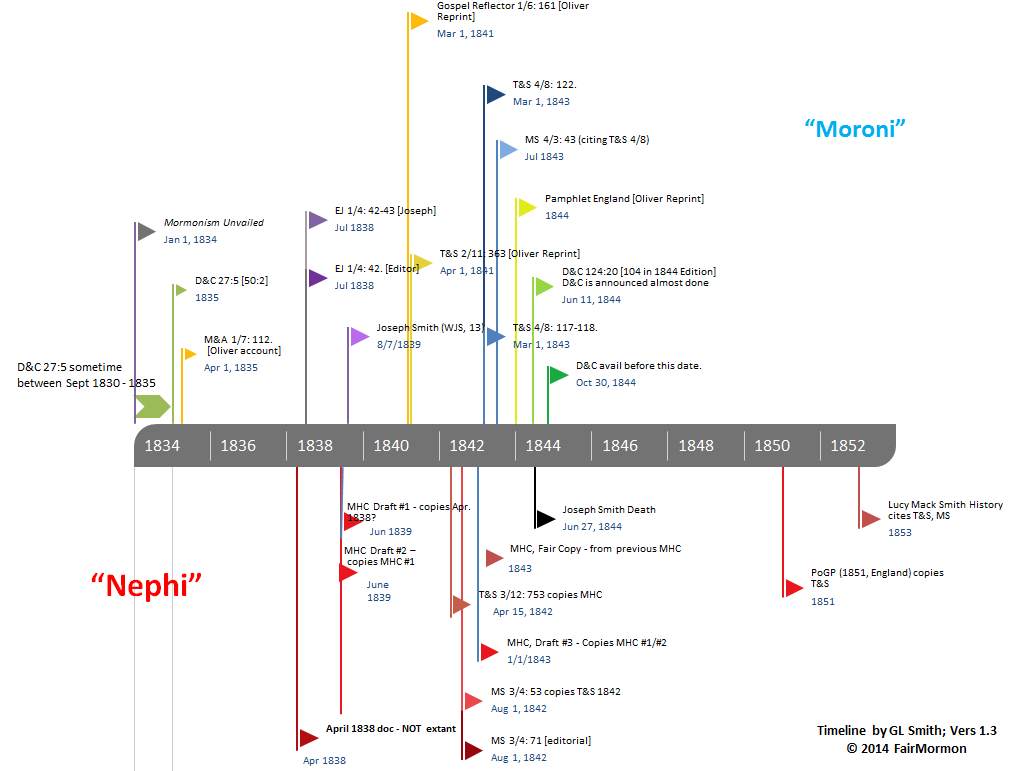 This is not an example of Joseph Smith changing his story over time, but an example of a detail being improperly recorded by someone other than the Prophet, and then reprinted uncritically. Clear contemporary evidence from Joseph and his enemies—who would have seized upon any inconsistency had they known about it—shows that "Moroni" was the name of the heavenly messenger BEFORE the 1838 and 1839 histories were recorded.