Question: How did Joseph Smith use his seer stones as a youth?

Revision as of 18:39, 22 November 2019 by SpencerMarsh (talk | contribs) (→‎Joseph as the village seer: the use of the seer stone prior to the Restoration)
(diff) ← Older revision | Latest revision (diff) | Newer revision → (diff)

Question: How did Joseph Smith use his seer stones as a youth?

Joseph as the village seer: the use of the seer stone prior to the Restoration

Brant Gardner clarifies the role that Joseph and his stone played within the community of Palmyra,

Young Joseph Smith was a member of a specialized sub-community with ties to these very old and very respected practices, though by the early 1800s they were respected only by a marginalized segment of society. He exhibited a talent parallel to others in similar communities. Even in Palmyra he was not unique. In D. Michael Quinn's words: "Until the Book of Mormon thrust young Smith into prominence, Palmyra's most notable seer was Sally Chase, who used a greenish-colored stone. William Stafford also had a seer stone, and Joshua Stafford had a 'peepstone which looked like white marble and had a hole through the center.'" Richard Bushman adds Chauncy Hart, and an unnamed man in Susquehanna County, both of whom had stones with which they found lost objects. [1]

During his tenure as a "village seer," Joseph acquired several seer stones. Joseph first used a neighbor's seer stone (probably that belonging to Palmyra seer Sally Chase, on the balance of historical evidence, though there are other possibilities) to discover the location of a brown, baby's foot-shaped stone. The vision of this stone likely occurred in about 1819–1820, and he obtained his first seer stone in about 1821–1822.[2]

Joseph then used this first stone to find a second stone (a white one). The second seer stone was reportedly found on the property of William Chase in 1822 as Chase described it:

In the year 1822, I was engaged in digging a well. I employed Alvin and Joseph Smith to assist me.... After digging about twenty feet below the surface of the earth, we discovered a singularly appearing stone, which excited my curiosity. I brought it to the top of the well, and as we were examining it, Joseph put it into his hat, and then his face into the top of his hat.... The next morning he came to me, and wished to obtain the stone, alleging that he could see in it; but I told him I did not wish to part with it on account of its being a curiosity, but I would lend it.[3] 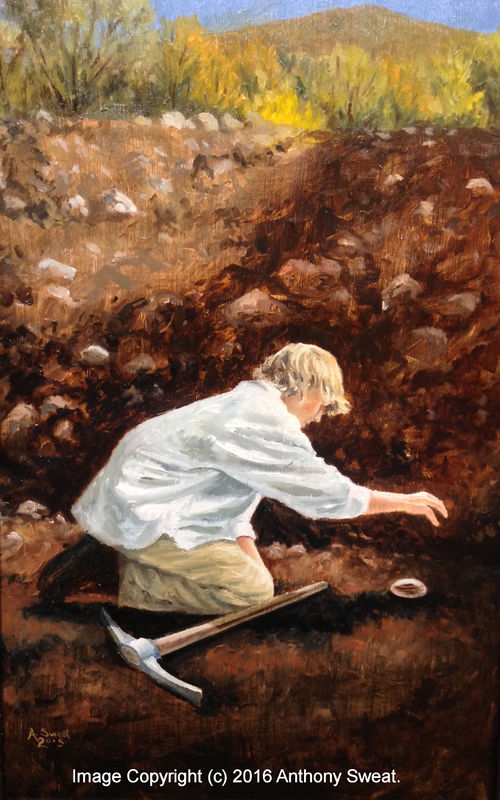