Question: Is the Church of Jesus Christ of Latter-day Saints a "cult"?

Question: Is The Church of Jesus Christ of Latter-day Saints a "cult"? 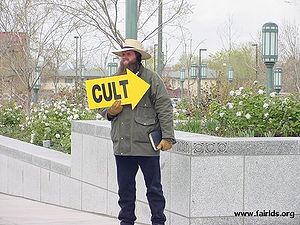 An anti-Mormon protester at Temple Square during the April 2003 LDS General Conference.

- a particular system of religious worship, especially with reference to its rites and ceremonies.

- an instance of great veneration of a person, ideal, or thing, especially as manifested by a body of admirers: the object of such devotion.

- a group or sect bound together by veneration of the same thing, person, ideal, etc. [1]

By modern definitions, the term cult encompasses a group of people sharing the same belief, as well as that of worship; or forms of ceremony. In the past, the word cult held a derogatory connotation by common language speakers. Thus, because the Jews revere Moses, Lutherans revere Martin Luther, Seventh-day Adventists are devoted to the teachings of Ellen G. White, and Christians revere Jesus Christ, all these groups could be considered "cults" by this definition. However, it would seem that even historical usage of the word may have been incorrect. 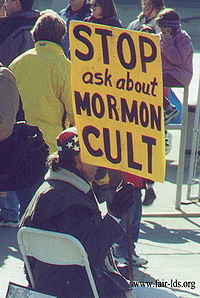 An anti-Mormon protester at the 2002 Winter Olympics in Salt Lake City, Utah.

The word “cult” as some speakers have used the term with reference to members of The Church of Jesus Christ of Latter-day Saints (aka “Mormons”) may be understood as more of an opinionated label implying a dislike, misunderstanding, or disagreement with particular religious practices or ideas.

For example, when early Christians were unpopular, uncommon, and powerless they too were labeled as a cult. However, when they later came into common practice and acceptance, they in turn began applying the same label in return to religions with whom they disagreed.

The advantage of common speakers or those opposed to a particular religious sect or idea using the term "cult", is that it tends to have a negative connotation. When the general public hears the term "cult," they do not simply think, "religious group devoted to some person or ideal." Nor, usually, do they think, "religion that has deviated from the beliefs of a parent religion." To many, a "cult" implies a fanatical, probably dangerous, religious group—and it is this image which critics seek to exploit. This is primarily because The term cult as it is sometimes used, often suggests extreme beliefs and bizarre behavior.

By definition, The Church of Jesus Christ of Latter-day Saints is a “cult” because it is a specific system of religious worship, especially with reference to its rites and concepts deity and because it is a sect of Christianity devoted to such a system. The same conclusion can be drawn to any other Christian faith as well as many non-Christian ones. Is the Church a “cult” with regards to extreme beliefs and bizarre behavior? As an organizational whole, no. But extremism tends to exist within many facets of belief.

This new Jewish-Christian party in the eyes of the religious leaders of the time was, at the worst, simply regarded as guilty of minuth (cultism), namely, a variety of Jewish heresy, or rather, Jewish sectarianism...early passages in the Talmud still contain hostile references to the minim (cults), among whom were numbered the Jewish Christians... [2]

Pliny, an early Roman leader also said that Christians were a “superstition, a foreign cult,” and this characterization was re-iterated by two more Roman writers, Tacitus, and Suetonius. Tacitus explained the attacks on Christians as being due to their 'cult' status, and also because “of their hatred toward mankind”. Tacitus also said that they were “an enemy to mankind”, and a “deadly superstition”. Suetonius called the Christians a “mischievous superstition” or, in other words, a cult. [3]

Families sometimes worry when a family member shows an interest in the Church. This worry can stem from fear of indoctrination which could lead to extremism. They can be reassured that The Church of Jesus Christ of Latter-day Saints puts a high value on maintaining and strengthening family relationships. The Church will not baptize children or youth under the age of eighteen without their parents' permission.