Question: Was a "forged" prophecy about Stephen A. Douglas added to the ''History of the Church''?

Revision as of 12:43, 28 June 2017 by RogerNicholson (talk | contribs) (→‎Question: Was a "forged" prophecy about Stephen A. Douglas added to the History of the Church?)
(diff) ← Older revision | Latest revision (diff) | Newer revision → (diff)

Question: Was a "forged" prophecy about Stephen A. Douglas added to the History of the Church?

Joseph Smith prophesied that Stephen A. Douglas would run for the presidency four years before he actually did

Joseph Smith told Judge Stephen A. Douglas four years before he was nominated for the Presidency of the United States:

I prophesy in the name of the Lord God of Israel, that unless the United States redress the wrongs committed upon the Saints in the State of Missouri and punish the crimes committed by her officers, that in a few years the government will be utterly overthrown and wasted, and there will not be so much as a potsherd left, for their wickedness in permitting the murder of men, women and children, and the wholesale plunder and extermination of thousands of her citizens to go unpunished; thereby perpetrating a foul and corroding blot upon the fair fame of this great republic, the very thought of which would have caused the high minded and patriotic framers of the Constitution of the United States to hide their faces with shame. Judge, you will aspire to the presidency of the United States; and if ever you turn your hand against me or the Latter-day Saints, you will feel the weight of the hand of Almighty upon you; and you will live to see and know that I have testified the truth to you; for the conversation of this day will stick to you through life.” (History of the Church, 5:394

As B.H. Roberts' editorial remark in the History of the Church noted:

There is, and can be no question about the prophecy preceding the event. The prophecy was first published in the Deseret News of September 24, 1856. It was afterwards published in England in the Millennial Star, February, 1859. The publication in the Deseret News preceding Douglas' Springfield speech, mentioned above, (June, 1857) by about one year, and about four years before Douglas was nominated for the presidency by the Charleston Democratic convention.[1]

This paper is available in digital form on-line. Screenshots are included in this article. 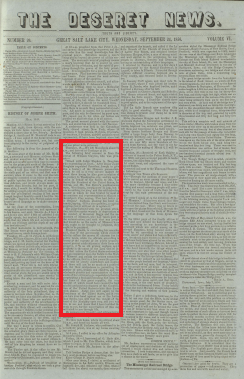 Page one of Deseret News (24 Sept 1856). Material on Stephen A. Douglas, at it appears in the History of the Church is outlined in read.

Detail of the Stephen A. Douglas prophecy, printed on 24 September 1856. This was nearly a year before Douglas would 'turn against' the Saints, and more than four years before he was nominated as President of the United States.