Under each picture you will find some comments by the photographer, as well as some links that provide additional information that explain the sensationalistic claims of the protesters. Unfortunately these are still pictures, so they don’t convey the yelling and screaming being done by many of the protesters.

We allow all people to worship who, where, or what they may–and trust the reader can determine if picketing a sacred edifice is Christian behavior. 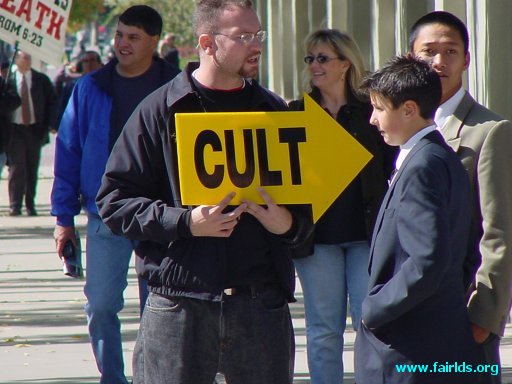 A protester states his belief about the Church. Somehow the young member to whom
he is talking just doesn’t look like a cult member. 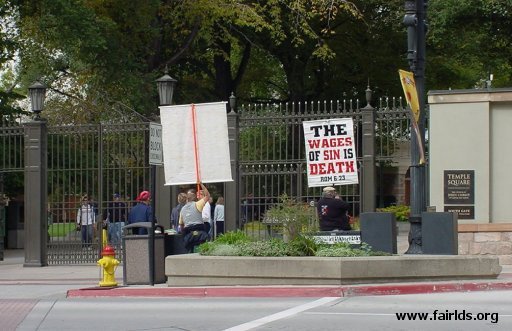 Protesting outside the south gate of Temple Square, a Christian fails to realize
(or refuses to believe) that the LDS agree with the statement on his sign. 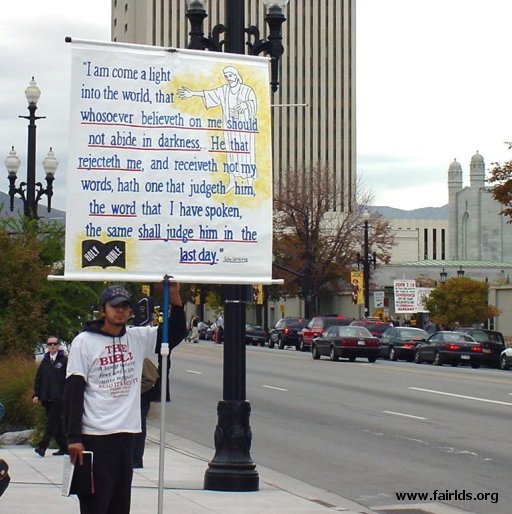 This person would seem to be in a more precarious position than the LDS he is
protesting against. The LDS believe the Bible to be the word of God, but we
also believe in additional scripture. If that additional scripture is also the
“word of Christ,” won’t that word judge the protester at the last day if he rejects it? 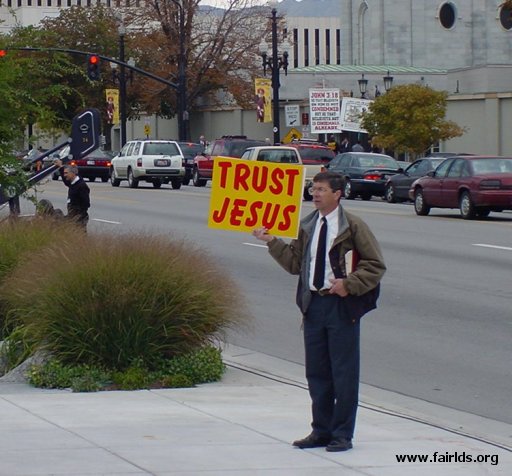 How can one not trust his Lord and Savior?
Notice the protesters across the street in the background, as well. 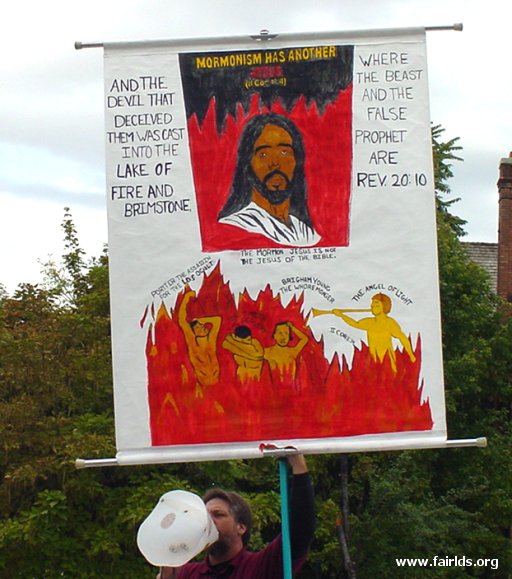 Notice the megaphone used to shout criticisms, mixed with scriptures, at those
attending General Conference. (Somehow I can’t envision the “still small voice”
of the Spirit using a megaphone.) The wording at the bottom of the sign refers to
‘Portter [sic] Rockwell, assassin for the LDS occult’ and ‘Brigham Young the whoremonger.’
It is refreshing to see Christian charity and love in action. 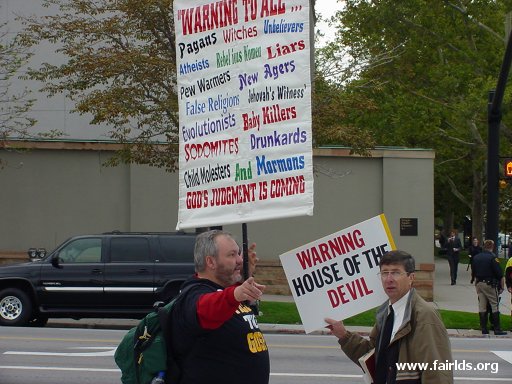 This protester believes the LDS are condemned to Hell with
a host of others, many guilty of grievous sins. 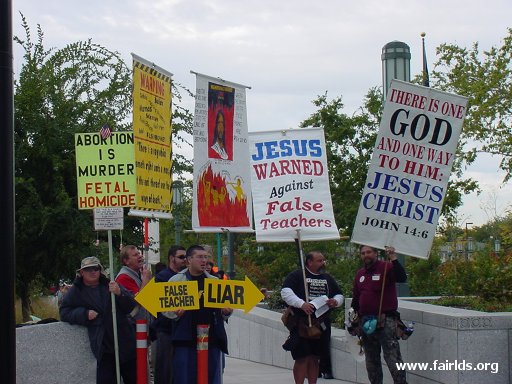 The LDS believe in continuing revelation, and that prophets help us avoid false teachers.
The arrows are protesting the LDS, not protesting the protesters. 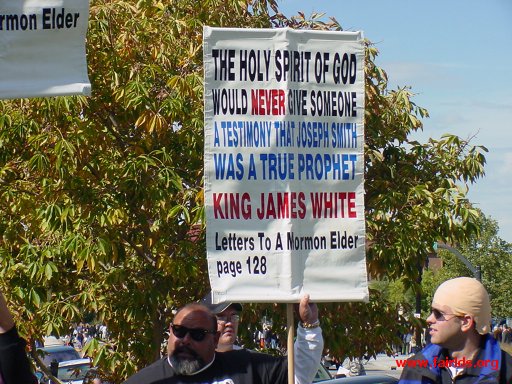 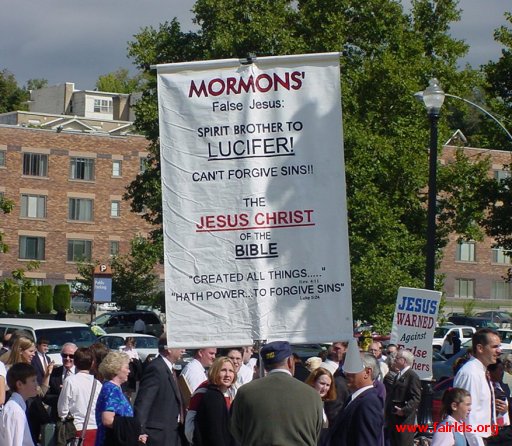 It is shocking to some that the LDS might believe Satan and Jesus are brothers.
Notice the megaphone hanging off the right side of the sign. 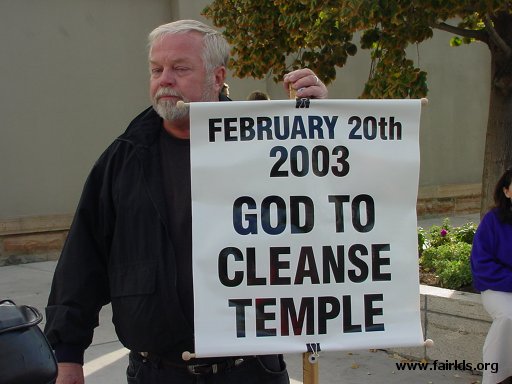 When I asked this gentleman how the temple would be cleansed, he said he didn’t
know, but had received a message from God that it would happen on this day. 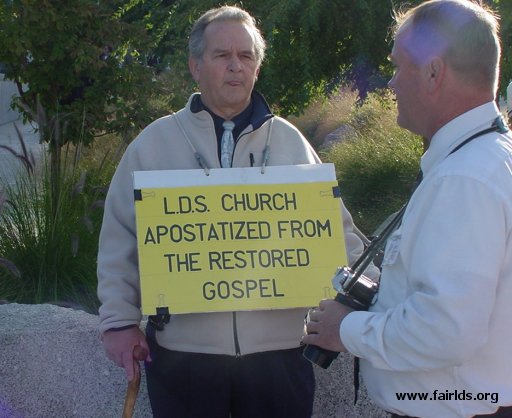 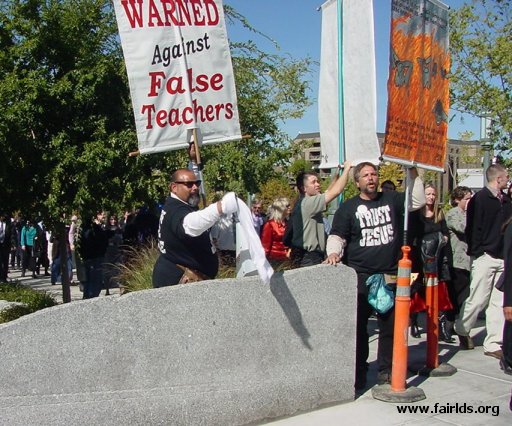 This protester was waving a pair of garments and making slurs concerning “magic
underwear.” I wonder if, in a different venue, he would be waving a yamikah (kipah)
and making anti-Semitic slurs. 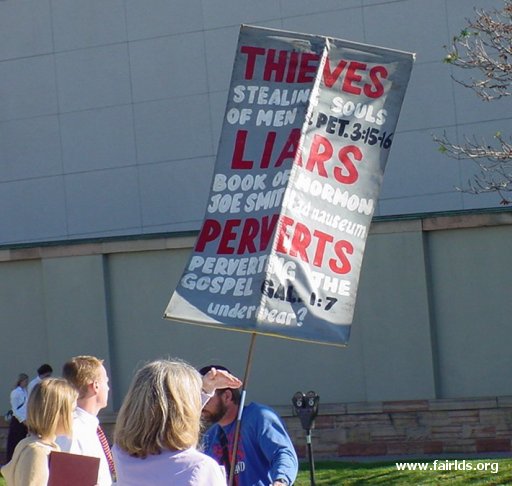 Another reference to our underwear. *sigh*
And the LDS are “thieves, liars, and perverts.” 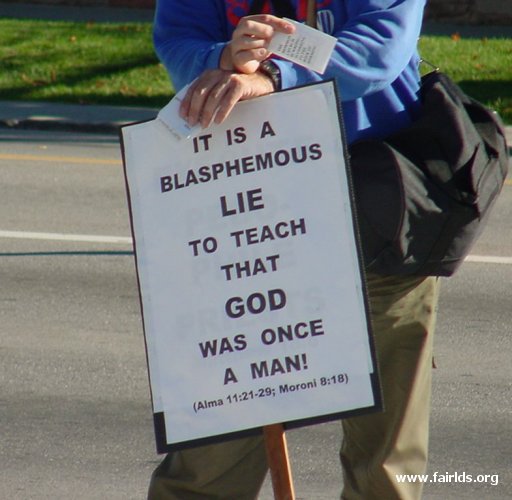 This protester was shouting how he had read the Book of Mormon twice,
and that he was willing to share his printed review. (It is a small,
folded paper, shown in his hand.) He dared the LDS to read it. I read
it in about two minutes. I liked reading the book much better.