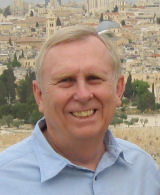 Michael grew up in Southern California and his parents were converts to the Church about the time the Los Angeles Temple was completed in 1955. He went on a mission to France (French Mission) in 1967 and returned to finish college at BYU in 1969. He graduated with a BS in Mechanical Engineering from BYU in 1973. While at BYU he met his wife, joined the Air Force ROTC, and got a private pilots license. He went into the Air Force as a Second Lieutenant and worked as an engineer in missiles and aircraft for most of his 20 year career. In 1976, he applied and was accepted as an exchange student at the French Flight Test School in Southern France and spent a year there with his growing family studying flight testing. He was called as a District Clerk while there and got to try to take lots of notes in French.

After a year at the French Flight Test School, he returned to California where he worked in flight testing at Edwards Air Force Base (AFB) and later at Tyndall AFB in Florida. While at Tyndall, he got an MBA from Florida State taking night classes. Mike’s last assignment was at Nellis AFB in Nevada. While there, he started writing Answering Challenging Mormon Questions. It was later published by Horizon Publishers and the copyright has since been bought and published by Cedar Fort, Publishers in Springville.

Mike retired from the Air Force in 1993 and moved to American Fork, Utah so his five kids could attend schools in Utah. They have all now married in the temple and are raising families of their own. Mike worked in various companies after serving in the Air Force but ended up with an engineering firm that helped destroy chemical weapons for the Army near Tooele, Utah. He discovered FairMormon one day while looking at LDS web sites and found his book was being quoted in FAIR’s Apologia journal without attribution. He complained and got an apology. He joined FairMormon and attended the second conference in Provo and has been active in the organization ever since.

Michael and his wife just recently completed a mission to Amiens, France where they served as a Branch President and Relief Society President for a year and a half. Since returning from their mission they have stayed busy helping with grand-kids, traveling, and doing cyber missionary work on the Internet.

Biblical Evidences of an Apostasy

Communion and Baptism: A Response to Mormonism 101 Chapter 13

Do Latter-day Saints Believe Jesus and Satan are Brothers? (PDF)