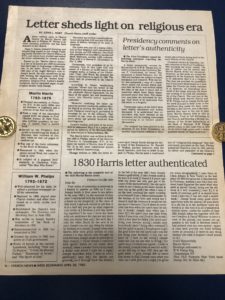 This series features presentations from our past conferences. This presentation is from 2006. It talks about some of the myths related to the Mark Hofmann case, and is given by two people who were involved, including the forensic document examiner who first determined that the documents were forgeries.

Steven L. Mayfield was born and raised in the San Francisco area. He served an LDS mission in Colorado and Nebraska. He has served in the Church as Stake Young Adult President, Elder’s Quorum counselor and instructor, Sunday School teacher, and ward clerk. Steve received a B.S. degree in police science from Weber State College (University) in 1980. His law enforcement career includes FBI file clerk (San Francisco, 1973-1977), Deputy Sheriff Jefferson County Colorado (1981-1990), and since 1994 as a crime scene investigator for the Salt Lake City Police Department. For more than the last ten years Steve has worked under the direction of George Throckmorton, and has assisted him in a number of historical/questioned document cases (non-law enforcement) including “The John D. Lee Lead Scroll.”

Steve has been involved with the Mormon History Association, Sunstone, Utah State Historical Society, and is the producer (and sometimes host) of Mormon Miscellaneous, a talk/interview/call-in program hosted by Van Hale over radio station KTKK in Salt Lake City. Steve does not consider himself a historian or writer, but a “documentation collector,” which includes newspaper and magazine articles, television videos, and tape recordings of radio news and programs on mostly Mormon issues. His large collection of material is in the process of being donated to the L. Tom Perry Library and Archives at Brigham Young University.

George Throckmorton recently retired from the Salt Lake City Police Department Crime Laboratory where he spent the last decade as the Director of the Lab. George has been in law enforcement for forty years and has been a Forensic Document Examiner for thirty-five of those years. George began his career with the Ogden City Police Department and has also worked for the San Diego Sheriff’s Crime Lab, Utah State Crime Lab, Utah Attorney General’s Office and the Salt Lake District Attorney’s Office. He has also taught at the Institute of Applied Science in Chicago, Washington State University, Weber State University, and is presently teaching as an Adjunct Professor at the Salt Lake Community College.

Many interesting cases have crossed George’s path in the past thirty years including the Howard Hughes “Mormon Will,” the Dan and Ron Lafferty case, the Hi-Fi Shop Murders, and numerous others. However, by far the most interesting and complex case had to be the Mark Hofmann bombing/forgery case. This encompassed a full-time committment for sixteen months involving more than 600 documents. After more than twenty years, new Hofmann forgeries continue to resurface almost every year. George’s one and only wife Caroline continues to be by his side after forty years. They have four children (one of whom is following in his path working at the Salt Lake Police Crime Lab as a Crime-Scene Technician and Forensic Document Examiner).