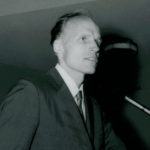 A renowned sociologist cornered me in the Harvard library stacks one day. “I can’t account for it,” he said, “and I probably wouldn’t trust your explanation. But I find more spiritual vitality per square inch among the Latter-day Saints than any other group I’ve studied. And I’ve covered the waterfront.”

I didn’t ask him to define his terms, and he didn’t wait around for my “explanation.” Here, I am invited to give one in brief and totally subjective terms.

For nearly half a century I have had an absorbing academic but also sympathetic role: to study and interrelate world religions and philosophies and to lecture and write about them. Five of those years I have lived in or near Jerusalem.

Over these decades I have often ascended the Mount of Olives from the east with clusters of visitors, most of them here for the first time. Whatever their origins and backgrounds, whatever their faiths or unfaiths, they, like me, typically gaze in awe at the golden vista of Jerusalem. In the heavy silence I wave my arm and say, “There is our past, present, and future.”

But I see and feel and revel in something few of them can yet see. Cranes loom on the horizon to testify that Jerusalem is being rebuilt. My mind’s eye sees a related rebuilding. In my own life, in my very nerve endings, so to speak, I have vindicated the audacious and unique affirmation of the Latter-day Saints. It is this: The original religion of Jesus and His first-generation church and community have, in fact, been twice-born; once in Jerusalem and once in a newer Jerusalem in America. The splendor of Christ’s past and much of the splendor of His future has become embodied and realized in a community that is a nucleus of the eventually all-inclusive kingdom of God. This new beginning, this fresh start with all of its fire and fervor, is in the process of transforming lives in the pattern of the earliest disciples of Jesus. The book of Acts is being rewritten in the lives of flesh-and-blood people in the world today. It will lead to a full-scale messianic and millennial age.

How all this came about is chronicled elsewhere. But there is nothing sectarian about it. The vision, traceable to Christ himself, is of a near-nation, a people, a culture, a civilization that encompasses everything this-worldly and everything other-worldly and aspires to make them one in the beauty of holiness.

Colleagues of other faiths who have done their homework on the heart of this restoration theology find in it all the traces of Jewish Christianity. When I studied under Paul Tillich, he called it “neoprimitivism.” The label helps a little if taken as a glimpse of what the Latter-day Saints mean by the “restoration of all things.” Primitivism points to the testimony that the covenant made with and by Abraham is forever binding and will eventually reach to the whole human family, that the major and minor prophets were prophets in the fullest sense. It points also to the Latter-day Saint recapitulation of the history of Israel, including their exodus into a new Zion—also to the merger of laws and ordinances in people-hood. Above all it points to the centrality of temples as the sanctuaries of full access to Christ’s most pervasive life-giving powers. All this is clearly in continuity with the Jewish heritage.

The term neo suggests the unblinking witness that men and women of God have beheld the living Christ in this generation as did Paul on the road to Damascus, and that traveling the world today are apostles and prophets and charismatic men and women whose credentials are identical to those of old. Under the sanctions of a royal priesthood, they are empowered and mantled as “servants of all.” (See Mark 10:44.) Young and old, all laypersons, are promised anew all the spiritual gifts of the biblical record. From the day of their conversion, youth as well as aged are called to be a combination rabbi/priest/minister. All teach, all serve, all occupy the pulpit, all perform functions of priestly ministration. More startling still is the insistence on the need and the reality of individual continual revelation. When it comes through the leadership and is upheld by the common consent of the membership, the result is modern scripture, some of which mirrors biblical teaching, some of which clarifies and supplements it.

Newly discovered ancient writings confirm the essential thesis that the role of the Messiah has been anticipated in every generation. All this increases the resonance and relevance of biblical scholarship in my life. Doctrinally speaking, it can be put in five sentences:

Christ is like God and God is like Christ.
If we are not Christlike we are not Christian.
There is only one way to become Christlike
That is the way He became what He was.
He submitted to the will of the Father and to all of His laws and sacraments.

These are required of us: They begin but do not end with faith and trust in Christ’s atonement. He who was full of grace was also full of truth—and is therefore a Revelator. The process requires enlightenment and growth in knowledge. We are saved through His mission, which is to overcome ignorance and sinfulness, and, beyond both deaths in the body and of the body, to bring us forth in resurrection.

Focus on these precepts as precepts may miss their dynamism, their power in life. In me, and in many others, the movement has created—not just fostered and encouraged, but created—new levels of openness in conscious imitation of the Jesus of history. I call it “Christianity in the present tense.” If we follow Him, it means we are:

1. Open upward, to inspirational and creative guidance from on high.
2. Open inward, to the deepest impulses and insights of our own vibrant spirits and those of every man, woman, and child.
3. Open outward, to all the good and true principles in the world, regardless of their source—and to their beauty.
4. Open, if need be, downward, to the wounded and staggering and addicted.

As a biographer I have worked with the whole history of notables from ancient times to now. In this context I have studied line by line and day by day the teachings and life of Joseph Smith. Harold Bloom, prolific Yale literary critic, has lately written that, by almost any measure, Joseph Smith stands with the greatest and most influential of American religious figures, including Thoreau, Emerson, and William James. But intriguing and impressive as he is becoming in world thought, his prime impact for those who knew him was to point beyond hearsay and secondhand assent.

Joseph Smith taught after his own encounters firsthand that all could come unto Christ in this way and eventually receive and give what Jesus called a “fulness” (D&C 93:19). With the advantage of recency and of trustworthy witnesses who shared and duplicated his experience, he stood for the opposite of what many supposed was the role of a prophet. Instead of “take my word for it,” his life and teachings say, “Find your own sacred grove and come to your own individual and independent awareness.” The one secure way to comprehend a prophet as a prophet, ancient or modern, is both humbling and terrifying. It is to become yourself endowed with the spirit of prophecy, which we are told in the Apocalypse is “the testimony of Jesus” (Revelation 19:10). My people know as well as we know anything what this means in heartfelt prayer and submission. Privileges follow that are laden with intimate personal effects, or in the word of Jesus, “fruits” (Matthew 7:20). Among them are His vitalizing love, joy, and peace that endure and even intensify in the midst of affliction and tragedy. I have tested and been tested by these realities through every critical wringer I know. They hold up.

My life has overlapped the decline and fall of many -isms and institutions. Some around me have despaired of religion and then made a religion of despair. When they cry out, “How can you know?” they are often saying to themselves, “None of these alleged experiences and spiritual outpourings occur today, so how can we believe they ever did?” My response: “Exactly backward.” The cumulative witness of the Latter-day Saints is that all of these things are happening today, so one may be assured they could have happened before. Much that distinguishes the movement is public, shareable, and repeatable.

In philosophical terms it could be said that the restoration movement is at once rational, for Christ who was and is the truth dissolves contradictions. It is empirical, for the senses were and will be involved in the invitation of the resurrected Christ, “Handle me, and see” (Luke 24:39). It is existential, for it is whole-souled. And it is pragmatic, for it works at all levels of human need. In these ways, what appears to some to be the least verifiable religion has turned out to be the most.

It is said that we cannot choose three things: our parents, our birth, and, because they are thrust upon us in tender years, our attitudes toward religion. That is as it may be. But in another sense I, and many like me, have chosen all three. I have been reawakened to and reclaimed my Divine parentage and have come to realize that it is as inescapable as my DNA. By submitting to what our people call “the first principles and ordinances of the Gospel” (fourth Article of Faith), I have chosen the time and extent of my rebirth. And with my family I choose regularly to seek out environments charged with light and godliness—among them the sacrament table and the temple. And I choose to bring them into the daily din and into my home.

In short, I, my wife, and my children—a family, we are assured, that can be as immortal as any individual—have embraced to our depths the religion of Jesus Christ, which transforms all of our loves and all of our lives.

Truman G. Madsen earned an A.M. and a PhD from Harvard University in philosophy and philosophy of religion. He was a guest professor at Northeastern University, the Graduate Theological Union at Berkeley, and Haifa University in Israel. At Brigham Young University, he was for two decades the Richard L. Evans Distinguished Professor of Religious Understanding and was named both Professor of the Year and Honors Professor of the Year. He served as director of Brigham Young University’s Jerusalem Center for Near Eastern Studies and as a member of the Jerusalem-based Dead Sea Scrolls Foundation and, in the Church of Jesus Christ of Latter-day Saints, as a mission president, stake president, and patriarch. He wrote and lectured widely on comparative religion and sponsored many symposia with Jewish, Christian, and Muslim scholars. Among his published works are Reflections on Mormonism, The Temple in Antiquity, Covenant and Chosenness in Judaism and Mormonism, Defender of the Faith: The B. H. Roberts Story, and The Search for Human Nature.

Professor Madsen died, following a lengthy struggle with cancer, on 28 May 2009. His statement here is reproduced—at the suggestion and with the kind permission of his widow, Ann N. Madsen—from Why We Believe (Salt Lake City: Bookcraft/Deseret Book, 2001).