Swine in the Book of Mormon

Question: Why would the Book of Mormon mention swine if they were living the Law of Moses?

"Swine" and "sow" are mentioned in the Nephite portion of the Book of Mormon with a tone of disgust (3 Nephi 7:8; 14:6). That's what we would expect among people who even nominally followed the constraints of the law of Moses on eating pork. But the non-Israelite Jaredites reveal no sensitivity about using "swine" as food (Ether 9:18). The peccary or wild pig was abundantly present throughout most of Mesoamerica, being valued both for its flesh and because it kills snakes in the wild.[1]

Sorenson: "There is an animal which they call chic, wonderfully active, as large as a small dog, with a snout like a sucking pig. The Indian women raise them"

A good example of the confusion is with the coatimundi (Nasua narica). Landa, the padre who favored us with a detailed description of Yucatan, wrote of the beast, "There is an animal which they call chic, wonderfully active, as large as a small dog, with a snout like a sucking pig. The Indian women raise them, and they leave nothing which they do not root over and turn upside down"...Another name, from the Aztecs, is pisote (Nahuatl pezotli), which means basically glutton. Yet pisote is sometimes applied also to the peccary or wild pig. In regard to the peccary, the Nahuatl terms quauhcoyametl and quahpizotl were developed after the conquest to distinguish the native species from the introduced Castilian pig, so by extension, the coati was sometimes termed quauhpezotli, tree-glutton, to distinguish it from the peccary, the ground-glutton.[2]

Miller and Roper: "two distinct species of peccary live in Mesoamerica....They were hunted and eaten as early as Olmec times"

Presently two distinct species of peccary live in Mesoamerica. These include the Collared Peccary (Pecari tajacu) and the White-lipped Peccary (Tayassu pecari), both of which can be found in the tropical regions near the Tuxtlas Mountains of the Yucatan. [4] The Jaredites as they presumably established settlements in Mesoamerica no doubt would have encountered them. They were hunted and eaten as early as Olmec times. Remains of these animals have been found associated with man for several thousands of years. There is a paleo-Indian carving of an extinct camel sacrum in the shape of a peccary. A Picture of this bone is shown by Evans. [5] The bone of this extinct camel came from deposits in central Mexico, and shows ancient interaction between this extinct animal and Pre-columbian natives. Remains of Pre-Columbian peccary have been found finds in Loltún Cave in the Yucatan [6] and in several other caves in the region associated with human artifacts. [7] There is no question that peccaries (“wild pigs”) and man shared this area since prehistoric times. 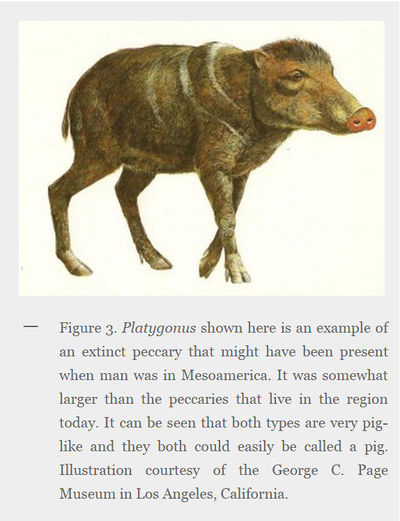 See FairMormon Evidence:
More evidence related to swine in the Book of Mormon