Question: Why is Joseph Smith listed as "author and proprietor" of the 1830 Book of Mormon instead of as "translator"?

Copyright law in 1830 in New York, where the Book of Mormon was first published, provided for the granting of copyrights to "authors and proprietors" but did not offer the same to translators

The fact is, Joseph Smith was complying with federal law (see I Statutes 124, 1790, as amended by 2 Stat. 171, 1802), which dictated the words the district clerk had to write when a person was taking out a copyright on a book. It can be demonstrated historically that many translators, including those who produced the 1824 edition of the King James Version of the Bible, were listed as "Author" to conform to this law.[1]

The first edition of the Book of Mormon contained a transcript of the secured copyright making this clear:

BE IT REMEMBERED, That on the eleventh day of June, in the fifty-third year of the Independence of the United States of America, A. D. 1829, JOSEPH SMITH, JUN., of the said District, hath deposited in this office the title of a Book, the right whereof he claims as author, in the words following, to wit: "The Book of Mormon: an account written by the hand of Mormon, upon plates taken from the Plates of Nephi. Wherefore it is an abridgment of the Record of the People of Nephi; and also of the Lamanites; written to the Lamanites, who are a remnant of the House of Israel; and also to Jew and Gentile; written by way of commandment, and also by the spirit of Prophesy and of Revelation. Written, and sealed up, and hid up unto the Lord, that they might not be destroyed; to come forth by the gift and power of God, unto the interpretation thereof; sealed by the hand of Moroni, and hid up unto the Lord, to come forth in due time by the way of Gentile; the interpretation thereof by the gift of God; an abridgment taken from the Book of Ether. Also, which is a Record of the People of Jared, which were scattered at the time the Lord confounded the language of the people when they were building a tower to get to Heaven: which is to shew unto the remnant of the House of Israel, how great things the Lord hath done for their fathers; and that they may know the covenants of the Lord, that they are not cast off forever: and also to the convincing of the Jew and Gentile, that Jesus is the Christ, the Eternal God, manifesting Himself unto all nations. And now if there be fault, it be the mistake of men; wherefore condemn not the things of God, that ye may be found spotless at the judgment seat of Christ.—By Joseph Smith. Jun. Author and Proprietor."

Clerk of the Northern District of New York 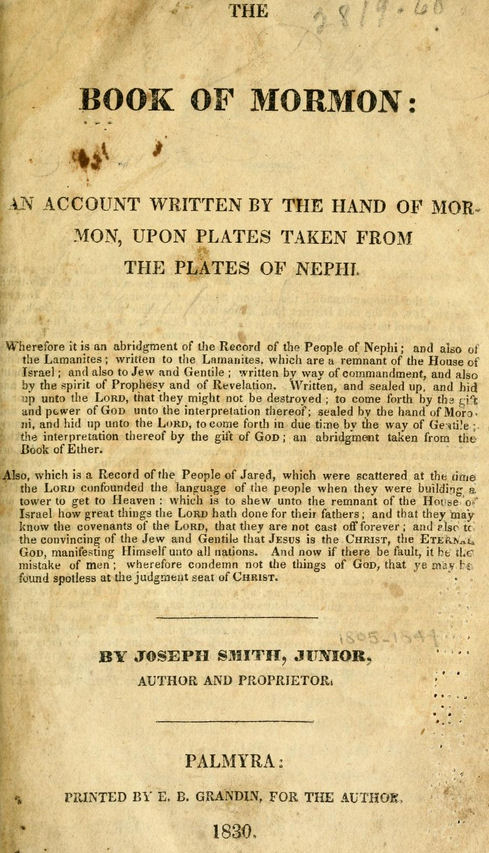 The title page of the 1830 Book of Mormon

It would be unreasonable if Joseph Smith were to apply for the copyright and assign "God" or "the angel Moroni" as the "author and proprietor". This complaint is not a serious issue, but merely an effort to find fault. Besides, the 1830 edition also states that the book was a translation of ancient records.

Notice in the first paragraph of the copyright form above that even though Joseph Smith legally claimed his right as "author" he still inserted information making it clear that the text originated from an ancient, pre-written "abridgment" that came forth to the modern world "by the gift and power of God" and through an act of "interpretation" or translation.

It should also be pointed out that in the Preface of the 1830 edition of the Book of Mormon the Prophet Joseph Smith designated himself as the "Author" but also indicated no less than six times that he was the translator of the text. Likewise, it can be seen in the 1830 testimony of the Eight Witnesses that Joseph Smith is called the "Author and Proprietor of this work" but it is also said that he "translated" the golden plates in order to obtain the text of the Book of Mormon. 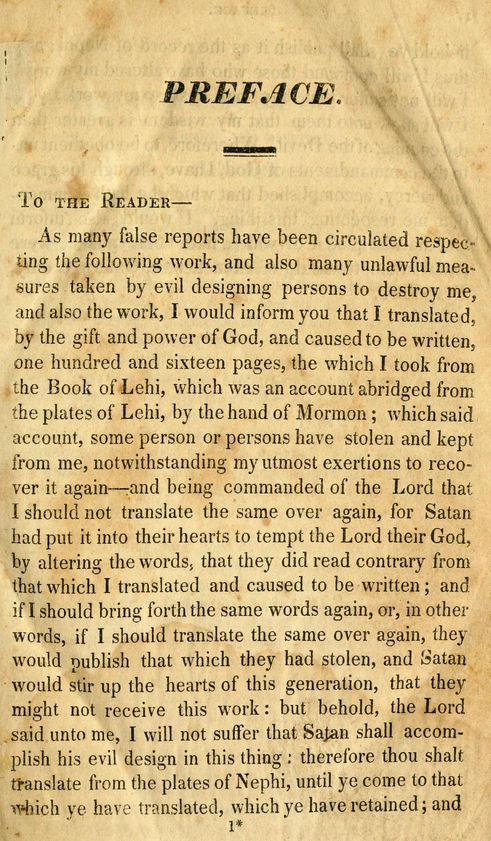 Page 1 from the 1830 edition of the Book of Mormon: "I would inform you that I translated, by the gift and power of God...."