Question: Is Joseph Smith's report of finding an ancient record on inscribed on metal plates plausible?

There are numerous examples of ancient writing on metal plates 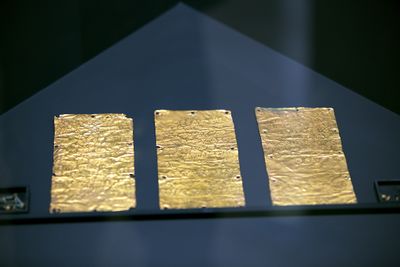 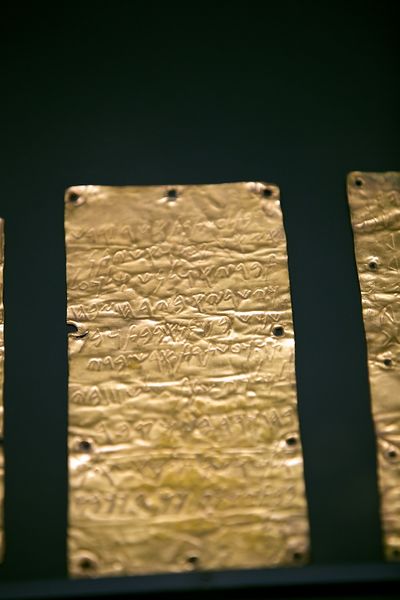 William J. Adams Jr. (1994): "These incidences raise the question: Did others in Lehi's Jerusalem inscribe records on metal plates?"

The use of metal plates upon which records are inscribed is fairly well attested throughout the Middle and Far East from many centuries before to many centuries after Lehi, but none so far appear to be from Lehi's seventh-century BC Judea.

This lack of metal inscriptions from Judea could be interpreted to mean that (1) Judeans did not write on metal plates, or (2) archaeology has not found artifacts which would support the practice of writing on metal plates in seventh-century BC Jerusalem. Alternative 2 seems to have been the problem, for inscribed silver plates have been excavated only recently.[7]

Sidney B. Sperry (1995): "Questions arise as to how Jeremiah's prophecies appeared on the brass plates"

Most contemporary Old Testament scholars question whether Moses wrote the Pentateuch, but the Book of Mormon affirms Moses' authorship. Questions arise as to how Jeremiah's prophecies appeared on the brass plates and what the nature of the Book of the Law was. According to the brass plates Laban and Lehi were descendants of Manasseh. How then did they come to be living in Jerusalem? The brass plates, on which may be found lost scripture, may have been the official scripture of the ten tribes.[8]

Question: What examples exist of writing on gold or other metal plates from around the ancient world?

Majority of references in this section courtesy of researcher Ted Jones.

"How do we know that the former sage Six Kings personally practiced it [the Tao]? Master Mo-Tzu says: It is not that I was alive in their time and personally heard their voices, saw their faces; I know it by what they wrote on bamboo and silk, inscribed on metal and stone, carved on vessels, to pass down to their descendants of future generations." [11]

There are many examples from India:

A few days ago I received a letter from Dr. John A. Widtsoe who at present presides over the European mission. Among other things he says:

"Last fall as I was leaving London I spent an hour in the British museum almost at random. I entered the large room devoted to oriental manuscripts. I noticed at once in the first case to the right a series of very fine silver plates, perhaps three inches wide and eight inches long, held together by a silver ring. The plates were beautifully engraved with characters which the legend said gave Buddha's first sermon. In the next case was a sheet of extremely thin gold likewise engraved on both sides, which according to the legend was a letter from one ruler to another."[12]

Laws of Manu, states that land grants were to be written on copper plates.[39]

Best articles to read next

The best article(s) to read next on this topic is/are: