Question: Does Colossians 1:16 teach that Jesus created all things out of nothing?

(Redirected from Creation in Colossians 1:16)

Question: Does Colossians 1:16 teach that Jesus created all things out of nothing?

Creedal Christians believe in the post-Biblical doctrine of creatio ex nihilo (creation out of nothing). Because this is how they understand the idea of creation, they read it into this verse.

Latter-day Saints have no quarrel with these verses. They emphatically believe that the Father created all things by Jesus Christ 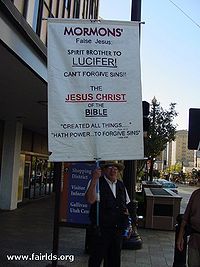 The passage in question reads:

[Jesus Christ] is the image of the invisible God, the firstborn of every creature:

For by him were all things created, that are in heaven, and that are in earth, visible and invisible, whether they be thrones, or dominions, or principalities, or powers: all things were created by him, and for him:

And he is before all things, and by him all things consist.(Colossians 1:15-17.)

The Greek text does not teach ex nihilo, but creation out of pre-existing raw materials

As one author observed, the Greek text does not teach ex nihilo, but creation out of pre-existing raw materials, since the verb ktidzo "carried an architectural connotation...as in 'to build' or 'establish' a city.... Thus, the verb presupposes the presence of already existing material."[1]

Thus, Jesus certainly participated in the creation of all created thing

Thus, Jesus certainly participated in the creation of all created things—but He worked with preexisting chaotic materials. The angelic ranks of "thrones, dominions, principalities, and powers" were also created by Christ, for these beings did not assume their angelic status or form without divine creative power, even though some aspect of their "intelligence" pre-dated God's creative acts in their behalf.

Each of us, along with Jesus and Lucifer/Satan, are spirit children of our Father in Heaven. Our personality and character were developed during the long pre-mortal existence. During this time the Savior, as the first born of the Father, developed the attributes that allowed God the Father to trust Jesus with the creation of all things that would be created and to assume the divine role of The Son. With that same process Lucifer developed the attributes that led him into sin and rebellion.

The difference between Jesus and Lucifer is so great that we cannot fully understand it. The rest of God's children are somewhere in between these two extremes. Because of Jesus' role in the creation Satan's premortal powers and status were dependent upon the creative power and authority of God, exercised through Jesus Christ.

The difference between those who followed the Father and those who followed Lucifer is in part dependent upon the eternal aspect of each individual. This may help to explain Satan's antipathy toward Jesus, and his desire to usurp the power and authority of God possessed by Christ (see Moses 4:1).

The claim, then, that Jesus and Satan were merely peers, misunderstands and misrepresents the LDS doctrine of creation, and Jesus' preeminent role in it.

See also: The Father: A Spirit vs. Embodied, Corporeality of God, Creatio_ex_nihilo, and No man has seen God