Relationship between Jesus Christ and Satan

We believe Jesus is the divine Son of God and that Satan is a fallen angel, but that God is the Father of all

Some Christians claim that since Latter-day Saints consider Jesus and Satan to be "brothers" in the sense that they have the same Father, that this lowers the stature of Christ, or elevates that of Satan. Some go so far as to imply that the LDS "really" worship or revere Satan, and are thus not true "Christians."

Jesus, Satan, and all humanity share God the Father as their spiritual sire. However, moral agency led Jesus to obey God the Father perfectly and share fully in the Father's divine nature and power. The same agency led Satan to renounce God, fight Jesus, and doom himself to eternal damnation. The remainder of God's children—all of us—have the choice to follow the route chosen by Satan, or the path to which Christ invites us and shows the way.

Divine parenthood gives all children of God potential; Christ maximized that potential, and Satan squandered it.

To choose the gospel of Jesus Christ and the grace that attends it will lead us home again. If we choose to follow Satan's example, and refuse to accept the gift of God's Only Begotten Son, our spiritual parentage cannot help us, just as it cannot help dignify or ennoble Satan.

In December 2007 the Church issued the following press release on this issue:

Like other Christians, we believe Jesus is the divine Son of God. Satan is a fallen angel.

As the Apostle Paul wrote, God is the Father of all. That means that all beings were created by God and are His spirit children. Christ, however, was the only begotten in the flesh, and we worship Him as the Son of God and the Savior of mankind. [1]

Latter-day Saints do not believe the extra-biblical doctrines which surround many Christians' ideas about God, such as expressed by the Nicene Creed

LDS doctrine does not subscribe to traditional creedal trinitarianism. That is, the LDS do not believe the extra-biblical doctrines which surround many Christians' ideas about God, such as expressed by the Nicene Creed. Specifically, the LDS do not accept the proposition that Jesus Christ and the Holy Spirit are "of one substance (homoousios) with the Father," as the Nicene Creed declares.

Rather, LDS doctrine teaches that God the Father is physically and personally distinct from Jesus Christ, His Only Begotten Son. The Father is understood to be the literal father of His spirit children.

LDS believe that Jesus Christ's role is central to our Heavenly Father's plan. Christ is unique in several respects from all other spirit children of God:

It is technically true to say that Jesus and Satan are "brothers," in the sense that both have the same spiritual parent, God the Father

God the Father also had many other spirit children, created in His image and that of His Only Begotten. These children include all humans born on the earth. Some of God's children rebelled against Him, and contested the choice of Jesus as Savior. (See D&C 76:25–27). The leader of these children was Lucifer, or Satan. Those spirit children of God who followed Satan in his rebellion against Christ are sometimes referred to as "demons," or "devils." (See Moses 4:1–4, Abraham 3:24–28).

Thus, it is technically true to say that Jesus and Satan are "brothers," in the sense that both have the same spiritual parent, God the Father.

Cain and Abel were also brothers, and yet no Bible reader believes that they are spiritual equals or equally admirable

However, critics do not provide the context for the idea that Christ and Lucifer were brothers. Cain and Abel were also brothers, and yet no Bible reader believes that they are spiritual equals or equally admirable. In a similar way, Latter-day Saints do not believe that Jesus and Satan are equals. The scriptures clearly teach the superiority of Jesus over the devil and that Michael (or Adam) and Lucifer (Satan) and their followers fought against each other (See Revelation 12:7-8) to uphold the plan of the Father and the Son.

Finally, while it is true that all mortals share a spiritual parent with Jesus (and Satan, and every other spiritual child of God), we now have a different, more important relationship with Jesus. All of God's children, save Jesus, have sinned and come short of the glory of God (Romans 3:23). In sinning, they abandon and betray their divine heritage and inheritance. Only through Jesus can any mortal return home to God the Father. This return becomes possible when a sinner is born again, and adopted by Christ, who becomes the spiritual father to those whom He redeems. (See Romans 8:14–39.)

Critics also ignore the Biblical references that imply that Satan is one of the "sons of God." (See Job:16, Job 2:1) 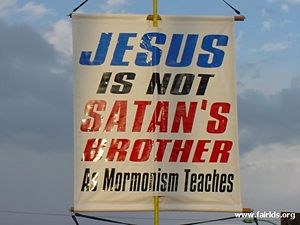 We occasionally hear some members refer to Jesus as our Elder Brother, which is a true concept based on our understanding of the premortal life with our Father in Heaven. But like many points of gospel doctrine, that simple truth doesn't go far enough in terms of describing the Savior's role in our present lives and His great position as a member of the Godhead. Thus, some non-LDS Christians are uncomfortable with what they perceive as a secondary role for Christ in our theology. They feel that we view Jesus as a spiritual peer. They believe that we view Christ as an implementor for God, if you will, but that we don't view Him as God to us and to all mankind, which, of course, is counter to biblical testimony about Christ's divinity…

Now we can understand why some Latter-day Saints have tended to focus on Christ's Sonship as opposed to His Godhood. As members of earthly families, we can relate to Him as a child, as a Son, and as a Brother because we know how that feels. We can personalize that relationship because we ourselves are children, sons and daughters, brothers and sisters. For some it may be more difficult to relate to Him as a God. And so in an attempt to draw closer to Christ and to cultivate warm and personal feelings toward Him, some tend to humanize Him, sometimes at the expense of acknowledging His Divinity. So let us be very clear on this point: it is true that Jesus was our Elder Brother in the premortal life, but we believe that in this life it is crucial that we become "born again" as His sons and daughters in the gospel covenant. [2] 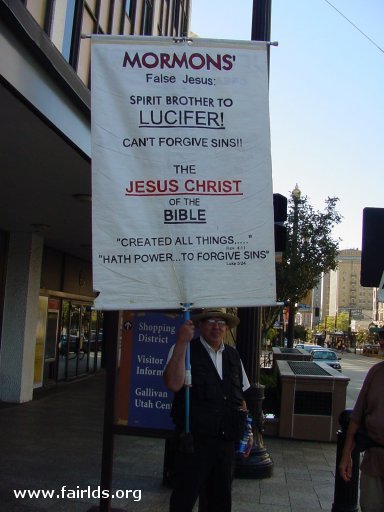 Since God was possessed of the greatest foresight for planning, and of the greatest skill for carrying out in action, before He commenced this business of the world,--inasmuch as there was in Him, and always is, the fountain of full and most complete goodness,--in order that goodness might spring as a stream from Him, and might flow forth afar, He produced a Spirit like to Himself, who might be endowed with the perfections of God the Father... Then He made another being, in whom the disposition of the divine origin did not remain. Therefore he was infected with his own envy as with poison, and passed from good to evil; and at his own will, which had been given to him by God unfettered, he acquired for himself a contrary name. From which it appears that the source of all evils is envy. For he envied his predecessor, who through his steadfastness is acceptable and dear to God the Father. This being, who from good became evil by his own act, is called by the Greeks diabolus: we call him accuser, because he reports to God the faults to which he himself entices us. God, therefore, when He began the fabric of the world, set over the whole work that first and greatest Son, and used Him at the same time as a counselor and artificer, in planning, arranging, and accomplishing, since He is complete both in knowledge, and judgment, and power... [3]

Many things he here taught are not considered "orthodox" by today's standards. However, Lactantius was definitely orthodox during his lifetime. Amazingly, many things here correspond to LDS doctrine precisely in those areas that are "unorthodox." For example,

1. "He produced a Spirit like to Himself," namely Christ. Christ, in this sense, is not the "co-equal," "eternally begotten," "same substance" "persona" of the later creeds.
2. "Then he made another being, in whom the disposition of the divine origin did not remain." God made another spirit who rebelled and who fell from his exalted status. He is the diabolus.
3. Christ is the "first and greatest Son." Not the "only" son.
4. Lastly, since the diabolus and Christ are both spirit sons of God, they are spirit brothers.

Mormonism can be a controversial topic for many non-Mormon Christians, but I have come to the conclusion that no theology has ever managed to capture the essential sameness of Jesus with us in a more striking manner. [5]:83