...and while in the attitude of calling upon the Lord in the 16th year of my age...

Question: Why does Joseph Smith state in his 1832 First Vision account that he was in his "16th year" of age? 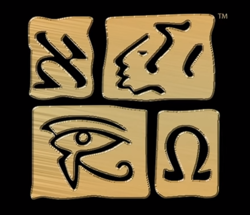 In the 1832 account, Frederick G. Williams inserted the "in the 16th year of my age" above Joseph's text after Joseph had already written it. (See: "History, circa Summer 1832," The Joseph Smith Papers)

Joseph's 1832 account states the "16th year" of his age in the handwriting of Frederick G. Williams

In Joseph Smith's 1832 First Vision recital he said that he was "in the 16th year of [his] age" when the manifestation took place but in all other accounts in which he mentions his age, he was in his "fifteenth year."

The only First Vision account that provided a different age was the 1832 account written in Joseph Smith's own handwriting. In 1832, 12 years after the First Vision, Joseph wrote, "we were deprived of the bennifit of an education suffice it to say I was mearly instructid in reading and writing and the ground rules of Arithmatic which constuted my whole literary acquirements."

Although the portion of Joseph's 1832 history is in his own handwriting, the text insertion of "in the 16th year of my age" was in the handwriting of Frederick G. Williams, Joseph's scribe. It is likely that Joseph's dating schemes were slightly off when he dictated his age to Williams, many years after-the-fact. There is nothing nefarious in Joseph Smith correcting his own slight mathematical miscalculations.

Two years later, Oliver Cowdery had Joseph's 1832 history in his possession when he began publishing history of the Church in late 1834 in the Latter-day Saints' Messenger and Advocate. Oliver clearly established Joseph's age as 14 ("the 15th year of his life") during the period of religious excitement (although Oliver ultimately never described the actual First Vision at this time). Once the date of the First Vision was correctly established it remained steady throughout all subsequent recitals as the "15th year" or "age 14."

Question: Are the ages stated in Joseph's accounts of the First Vision "all over the place?"

The ages are not, as one critic states, "all over the place." [1] The only account produced by Joseph Smith that indicated a different age was the 1832 account (age 15 rather than 14, based upon a text insertion above the line by Frederick G. Williams after Joseph had already written his account). All remaining accounts indicate age 14 (the "15th" year).

In the 1832 account, Frederick G. Williams inserted the "in the 16th year of my age" above Joseph's text after Joseph had already written it. (See: "History, circa Summer 1832," The Joseph Smith Papers)

In the 1832 history, the farther back in time Joseph Smith goes, the more inexact Joseph's dating scheme becomes

The 'one-year-off-the mark' dating anomaly of the 1832 First Vision account can best be understood by taking a look at all of the dates and time frame indicators that are provided within the document. It can then be seen that the farther back in time Joseph Smith goes, the more inexact his dating scheme becomes.

Notice that the date of the First Vision is an above-the-line insertion in the handwriting of Frederick G. Williams, meaning that it was not placed in the text initially but was added at a later time than the creation of the main text.

"in December following we moved to Susquehanna"

Joseph Smith: "I was merely instructed in reading and writing and the ground <rules> of arithmetic which constituted my whole literary acquirements”

Particular attention should be focused on the fact that even though Joseph Smith correctly stated that he was "seventeen years of age" when the angel Moroni appeared to him on 22 September 1823, he got the time of that manifestation wrong by one year. A clue as to why this incorrect date was placed by the Prophet in this historical account can be found right in the 1832 document itself. Near the beginning of the narrative Joseph writes: “being in indigent circumstances [we] were obliged to labor hard for the support of a large family having nine children. And as it required the exertions of all that were able to render any assistance for the support of the family therefore we were deprived of the benefit of an education. Suffice it to say [that] I was merely instructed in reading and writing and the ground <rules> of arithmetic which constituted my whole literary acquirements”. Elder Orson Pratt once asked rhetorical questions of the Prophet to illustrate his meager level of formal education: "Had you been to college? No. Had you studied in any seminary of learning? No. Did you know how to read? Yes. How to write? Yes. Did you understand much about arithmetic? No. About grammar? No. Did you understand all the branches of education which are generally taught in our common schools? No." (Journal of Discourses, 7:220-21). And when Elder Pratt wrote specifically about the First Vision he was even more specific about the level of the Prophet's math skills, saying that he had "a very limited understanding of the elementary rules of arithmetic." (Orson Pratt, An Interesting Account of Several Remarkable Visions [Edinburgh, Scotland: Ballantyne and Hughes, 1840], ---).

In the 1838 history, Joseph got the year of his own brother's death wrong

The 1832 history is not the only one where the Prophet made a dating mistake that was one year off the mark. He did the same thing when he created the 1838 Church history, but this time he got the year of his own brother's death wrong. He erroneously remembered that it was 1824 instead of 1823. The significant thing about this particular dating blunder is that four years after the Prophet recorded the initial information he came to the realization that it was not correct and had his scribe, Willard Richards, make the appropriate adjustment. Perhaps the problem with the date was brought to the Prophet's attention by a member of his own family after the information had been printed and made available for public perusal [publication in May 1842; correction in December 1842].

"In the year Eighteen hundred and twenty four my fathers family met with a great affliction by the death of my eldest brother Alvin."

"In the year Eighteen hundred and twenty four my fathers family met with a great affliction by the death of my eldest brother Alvin." [this year designation was not corrected by Willard Richards - whose editorial additions and notes end before this point in the manuscript]

A similar type of dating correction scenario, as mentioned above, may have taken place in connection with the 1832 history. Oliver Cowdery claimed that he had the Prophet's help in creating his December 1834 Church history article and despite the fact that he had the erroneously-dated 1832 document sitting in front of him [see paper on this subject] he provided the correct year for the Prophet's First Vision - "in the 15th year of his life" (i.e., between 23 December 1819 and 23 December 1820). And just nine months later the Prophet himself was telling a non-Mormon that the First Vision took place when he was "about 14 years old" (Joseph Smith diary, 9 November 1835).

Question: Is there a case where Joseph stated that his age was 17 rather than 14 at the time of the First Vision?

Some critics think so: One case in which the age in an 1835 account was mistakenly stated as age 17

An image from "mormoninfographics" is in circulation on the internet which mistakenly states that Joseph claimed that he was age 17 when the First Vision occurred. However, this was a misreading of Joseph Smith's 1835 journal entry, which clearly states that Joseph was age 14 at the time of the first vision, and age 17 at the time of Moroni's visit. 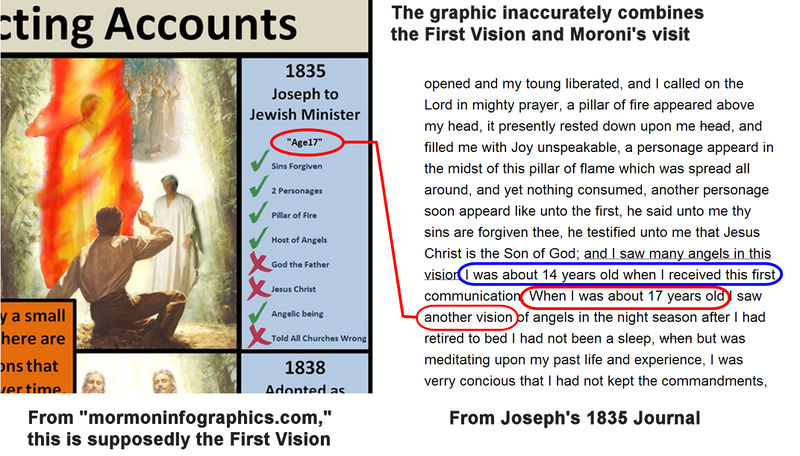 An anti-Mormon "mormoninfographic" which attempts to demonstrate that the ages of the first vision accounts are different. Since this was posted, the owner of "mormoninfographics" acknowledged and corrected this mistake by removing all of the ages from this particular graphic. [2]