Question: Has the Church tried to hide the fact that Joseph fired a pepperbox pistol at the mob which murdered him?

Question: Has the Church tried to hide the fact that Joseph fired a pepperbox pistol at the mob which murdered him?

Joseph's gun is on display at the Church History Museum in Salt Lake City, where anyone can see it. It has been there for years

Some claim that the Church has tried to hide the fact that Joseph fired a pepperbox pistol at the mob which murdered Hyrum and was soon to kill him. 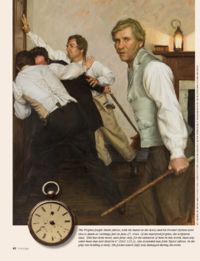 Ensign (June 2013): 40, shows Joseph with the pepperbox pistol he would fire to defend himself and others prior to his murder.

Joseph's gun is on display at the Church History Museum in Salt Lake City, where anyone can see it. It has been there for years.

There is overwhelming evidence that from the earliest days following the martyrdom, to the present, that both official and unofficial Church publications have repeatedly mentioned Joseph's pistol. 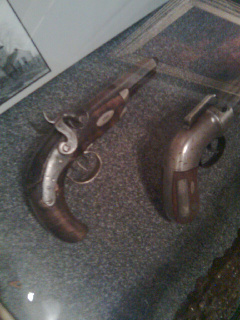 Photograph of the pistols used by Joseph and Hyrum. The pepperbox pistol fired by Joseph Smith at Carthage Jail is located on the right. From the museum of Church History in Salt Lake City, Utah, and labeled as such. Photo (c) Blair Hodges, used with permission. Another image of the pepperbox pistol may be viewed here

From the very beginning of the Church, Joseph's possession and use of a pepperbox pistol in defense of himself and his brother and friends has been repeatedly mentioned. This includes statements by LDS, anti-Mormon, and other secular sources even from a very early period, demonstrating that there was no attempt to hide the facts.

martyrdom and actually shows the smoking gun in Joseph's hand (circa this date). This was a traveling show of huge painted canvases that would be displayed to LDS audiences.

There was to be one great final lesson before his mortal life ended. He was incarcerated in Carthage Jail with his brother Hyrum, with John Taylor, and with Willard Richards. The angry mob stormed the jail; they came up the stairway, blasphemous in their cursing, heavily armed, and began to fire at will. Hyrum was hit and died. John Taylor took several balls of fire within his bosom. The Prophet Joseph, with his pistol in hand, was attempting to defend his life and that of his brethren, and yet he could tell from the pounding on the door that this mob would storm that door and would kill John Taylor and Willard Richards in an attempt to kill him. And so his last great act here upon the earth was to leave the door and lead Willard Richards to safety, throw the gun on the floor, and go to the window, that they might see him, that the attention of this ruthless mob might be focused upon him rather than the others. Joseph Smith gave his life. Willard Richards was spared, and John Taylor recovered from his wounds. “Greater love hath no man than this, that a man lay down his life for his friends.” The Prophet Joseph Smith taught us love—by example.

“As he struck the floor he exclaimed emphatically, ‘I am a dead man.’ Joseph looked towards him and responded, ‘Oh, dear brother Hyrum!’ and opening the door two or three inches with his left hand, discharged one barrel of a six shooter (pistol) at random in the entry. . A ball [from the musket of one of the mob] grazed Hyrum’s breast, and entering his throat passed into his head, while other muskets were aimed at him and some balls hit him.

Joseph continued snapping his revolver round the casing of the door into the space as before, while Mr. Taylor with a walking stick stood by his side and knocked down the bayonets and muskets which were constantly discharging through the doorway....
When the revolver failed, we had no more firearms, and expected an immediate rush of the mob, and the doorway full of muskets, half way in the room, and no hope but instant death from within.” off-site

The FAIR Blog responds to these questions

Roger Nicholson,"The Prophet and the Pistol: A Perspective on the Martyrdom of Joseph and Hyrum Smith", FAIR Blog, (November 7, 2013)

In the Church History Museum near Temple Square, located inside a glass case, resides a pair of 19th century pistols and a walking stick. The placard reads, in part, as follows,

Joseph’s Pepperbox Pistol and Hyrum’s Single Shot Pistol. These guns were used by both men for their defense during the attack at Carthage

These were the guns that were smuggled into the Carthage Jail while Joseph Smith, Hyrum and their friends awaited their fate. On the morning of June 27, 1844, Cyrus Wheelock visited the jail.

The morning being a little rainy, favoured his wearing an overcoat, in the side pocket of which he was enabled to carry a six-shooter, and he passed the guard unmolested. During his visit in the prison he slipped the revolver into Joseph’s pocket. Joseph examined it, and asked Wheelock if he had not better retain it for his own protection.
This was a providential circumstance, as most other persons had been very rigidly searched. Joseph then handed the single barrel pistol, which had been given him by John S. Fullmer, to his brother Hyrum, and said, “You may have use for this.” Brother Hyrum observed, “I hate to use such things, or to see them used.” “So do I,” said Joseph, “but we may have to, to defend ourselves;” upon this Hyrum took the pistol. [i]

Although it was referred to as a “six shooter,” the pepper-box pistol was not a revolver in the normal sense. It incorporated six individual barrels, it was difficult to aim and tended to be unreliable. The June 2013 Ensign features a painting Greater Love Hath No Man, by Casey Childs. [ii] The artwork features all three items in the display case. Joseph, Hyrum and Willard Richards are attempting to hold the door shut as the mob attempts to enter the room. John Taylor is holding his walking stick. In Hyrum’s left pocket is the single shot pistol brought into the jail by Fullmer, and in Joseph’s left pocket, clearly visible, is the pepper-box pistol given to him by Wheelock.

To see citations to the critical sources for these claims, click here Template:Enndotes sources