Question: Was Brigham Young a Mason?

Yes. Brigham Young, along with many other men in Nauvoo, joined the Masons at Joseph Smith's encouragement 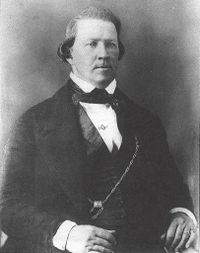 Photo of Brigham Young. The Masonic symbol of compass and square is clearly visible in the pin he wears. Matthew B. Brown notes that "Brigham may have worn the [Masonic] pin [visible in some photographs] in order to remind other Americans that he was part of a brotherhood that was bound by oath to look after its own (see Wilford Woodruff Journal, 19 August 1860)."[1]

Yes. Brigham Young, along with many other men in Nauvoo, joined the Masons at Joseph Smith's encouragement.

When the Latter-day Saints occupied Nauvoo, Illinois, in the year 1842, there were approximately four thousand residents inside the city limits (twelve thousand by 1844),1 but only thirty people in the general area had membership in the Masonic fraternity. Among this small group were such notable men as Hyrum Smith (the Prophet’s brother), Heber C. Kimball (an Apostle), John Smith (the Prophet’s uncle), Newel K. Whitney (a bishop), and George Miller (another bishop)....

There is no evidence that Joseph Smith played a direct role in trying to get a Masonic lodge established among the Saints, though it must be admitted that the Masons adhered to principles that would have been especially attractive to the leader of a frequently (and recently) persecuted people. “Freemasonry is one of the strongest binding contracts that exists between man and man,” said Elder John Taylor of the Quorum of the Twelve Apostles.10 And according to Apostle and Master Mason Heber C. Kimball, a member of that society could expect other Masons to step forward in time of need to render assistance. These fraternal brothers were expected to be faithful to each other “in every case and under every circumstance, the commission of crime excepted.”....

[On] 7 April 1842 [Joseph attended the] initiation of Brigham Young.

No. Brigham Young was a Mason, but was not a 33rd degree Mason

No. Brigham Young was a Mason, but was not a 33rd degree Mason (technically an auxiliary degree of the Scottish Rite). It would have been impossible for Brigham Young to become such, since that degree was first introduced in Illinois masonic lodges (the only lodges to which Brigham had access prior to the exodus to Utah) in 1857, long after Brigham's departure. (The 33 degree did not become formalized in the Untied States until the early 1850's with the work of Albert Pike and Dr. Albert G. Mackey.)

It is important to understand the nature of the appellate bodies in Masonry. While a 33 degree mason might sound impressive, in fact such a person hold no more authority in Masonry than does the typical Master Mason (3rd degree). The appellate bodies are under the control of the Grand Lodge of a state or territory and a Grand Lodge is made up of all the Master Mason in that state or territory. The highest office any Mason can hold is that of Grand Master of a Grand Lodge and the only requirement to be elected to that office is to be a Master Mason. Therefor the highest degree that any Mason can hold is that of Master Mason (3rd Degree). The appellate degrees are appendages to that degree and not “higher” degrees as they are sometimes presented.[3]

Utah territory had no lodge until 1872. Such a lodge would have been a prerequisite for any Scottish Rite appellate body to be formed.

While there were at least two abortive attempts to form a Grand Lodge in the territory by the Mormons, one by means of an application to the United Grand Lodge of England which seems to have been lost and never reached that body and another made to a Grand Lodge in Mexico which was rejected. Masonry by and large was not practiced by the Mormon population in Utah in Brigham Young's day. Indeed, the Grand Lodge of Utah was not formed until 1874 and it then imposed a ban on Mormons being members. This even precluded Mormon Masons from other jurisdictions from visiting Utah lodges. This would continue in some form until 1984.

Thus, it would have not have been possible for Brigham Young to have received the 33 degree designation while in Utah. Given that the 33 degree is an honorary designation (that is, it is given by the vote of others holding the degree) it would seem unlikely in the extreme that such an honor would have been given to Brigham who, at the time, was generally held in low regard. Likewise, the Mormons in general were viewed with disdain by the general population of Americans, and the above-mentioned hostility of the Grand Lodge of Utah towards Mormons also makes claiming that Young was honored in this way implausible.

Perhaps most telling of all is there is no documentary evidence of Brigham Young ever receiving such a degree either from the Northern Jurisdiction of the Scottish Rite of which the Grand Lodge of Illinois is a member or in the Southern Jurisdiction of which the Grand Lodge of Utah is governed. While in the early years of those rites some record keeping was lost or not well kept by the mid-19th century when Brigham Young would have been able to receive such a degree the records of both jurisdictions are very complete. Those records are silent in this matter.[4]