Question: Did President Jimmy Carter threaten the Church's tax-exempt status because of their policy on blacks and the priesthood?

Question: Did President Jimmy Carter threaten the Church's tax-exempt status because of their policy on blacks and the priesthood?

On March 11, 1977 at 12:03 pm President Carter met with Spencer W. Kimball, President of the Church of Jesus Christ of Latter-day Saints, Representative Gunn McKay (D-Utah), and Representative Jim Santini (D-Nevada) for approximately 20 minutes in the White House.[1] This meeting, noted in President Carter's White House diary, is popularly rumored among ex-Mormons to be the meeting in which Carter threatened the Church with a rescinding of the Church's tax-exempt status over the issue of the priesthood ban.

One ex-Mormon on the Recovery from Mormonism message board claimed to have located an "the actual photograph" of the 11 March 1977 meeting on LDS.org! [2] That photograph, however, is actually of a meeting in the Tabernacle on November 27, 1978. 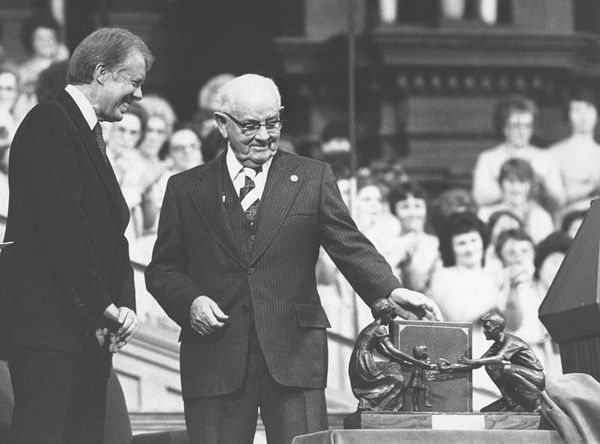 This meeting was documented in the January 1979 Ensign:

Two presidents saluted the family as one of life’s greatest institutions at a special November 27 program in the Salt Lake Tabernacle, culminating National Family Week in the United States.

Before a capacity crowd, with national and international television cameras whirring, President Spencer W. Kimball urged his listeners to recognize the family as “our chief source of physical, emotional, and moral strength.” He presented United States President Jimmy Carter with a bronze statuette depicting the family circle. The miniature of a father, mother, and child is based on the original work by Utah sculptor Dennis Smith, Circle of Love, one of the pieces in the Relief Society monument to women in Nauvoo. [3]

President Kimball wrote a letter to President Carter in May 1977, only two months after the March 11 meeting:

W. Don Ladd, Regional Representative of the Twelve, and Thomas E. Daniels of the Genealogical Department of the Church presented a family tree and a leather-bound volume of genealogical information on the Carter family to the President on 31 May.

The book included a letter to President Carter from President Spencer W. Kimball, in which he spoke of the Latter-day Saints’ “deep reverence and gratitude for our ancestors, which in turn gives us greater sense of responsibility to our posterity.”

President Carter found the Church’s research “very exciting to me,” and he said, “I look forward to studying the chart. This is an area of knowledge I’ve never had.” The two-inch thick volume included several 8-by-10-inch pedigree charts and family group sheets, along with a research summary of each line researched and what was still missing from those lines. This is the first time the Church has ever given such a gift to a president of the United States. [4]

The allegation that the LDS church's tax-free status was threatened in 1978 seems to have originated prior to 1988, and resurfaced in 2001

On June 2, 1988, the Chicago Tribune quoted "critics" of the Church as speculating that Kimball's meeting with Carter involved the threat of the Church losing its tax exemption. The Tribune quotes Ogden Kraut, whom they stated was an "an excommunicated Mormon fundamentalist writer-photographer":

Despite church claims that the change came from revelation, critics say the move was pure business, that the Mormons wanted to expand further into black Third World countries and would not be able to do so as long as blacks were discriminated against, and that the Mormon church, the fastest growing mainstream church in the U.S., stood to lose its tax-exempt status for discriminating against blacks.

``We were told by a secretary in the church that Spencer Kimball spent 36 minutes talking to President (Jimmy) Carter, and shortly thereafter, the so-called `revelation` came down,`` said Ogden Kraut, an excommunicated Mormon fundamentalist writer-photographer.

Fundamentalist Mormons take the Bible and the Book of Mormon literally, and insist that God doesn`t make revelations to earthlings, Kraut said.

``My belief is that it was the expedient thing to do. The church didn`t want to lose its exemption,`` Kraut said. [5]

The claim resurfaced in 2001 when a claim that the federal government had threatened to revoke the Church's tax-exempt status back in 1978 was made by a woman named Kathy Erickson in a letter to the Salt Lake Tribune on March 11, 2001. Erickson stated,

What’s done is done. There no longer is any prejudice against blacks in the Mormon church, the power of money took care of that. Back in 1978 the federal government informed the LDS Church that unless it allowed blacks full membership (including the priesthood) they would have to cease calling themselves a non-profit organization and start paying income taxes. On $16.5 million a day in tithing alone that’s a lot of tax monies that could be better used in building up the Kingdom of God.

The church immediately saw the error of its ways and the brethren appealed to God for a revelation; it came quickly. God works in mysterious ways, His wonders to perform, and today The Church of Jesus Christ of Latter-day Saints has nothing but love for all races of people on Earth.”[6]

A representative of the Church Public Affairs department responded:

It's one thing to distort history, quite another to invent it. Kathy Erickson (Forum, March 11) claims that the federal government threatened The Church of Jesus Christ of Latter-day Saints with its tax-exempt status in 1978 because of the church's position regarding blacks and the priesthood.

We state categorically that the federal government made no such threat in 1978 or at any other time. The decision to extend the blessings of the priesthood to all worthy males had nothing to do with federal tax policy or any other secular law. In the absence of proof, we conclude that Ms. Erickson is seriously mistaken.