Question: Is it possible that Joseph Smith is not a martyr because, while in jail, he had a gun and he had the temerity to defend himself?

Question: Is it possible that Joseph Smith is not a martyr because, while in jail, he had a gun and he had the temerity to defend himself?

It seems clear that:

In order to make their argument tenable, the critics must do three things. First, they must take some creative liberties with the English language. In this case, the word being redefined is the term martyr. Webster’s New World Dictionary defines a "martyr" as

“a person who chooses to suffer or die rather than give up his faith or his principles.”[1]

The online resource, Dictionary.com, defines a martyr as

“one who chooses to suffer death rather than renounce religious principles.”[2]

Both are nearly identical and fairly standard definitions, and neither includes a requirement or qualifiers of any sort. However, some anti-Mormon writers have taken the term martyr and subtly changed its definition to suit their own needs. The new definition would probably read something like this: Martyr: a person who chooses to suffer or die rather than give up his faith or his principles without any resistance or effort at self-defense on his part whatsoever.

Critics are free to use such a definition, but it belongs to them alone; it is not the standard use of the word, and not what Church members mean when they refer to the "martyrdom" of Joseph and Hyrum Smith at Carthage.

Throughout Christian history, "martyrs" have been understood to be those who suffered quietly, and those who resisted, even with violence, and even to the death of those who persecuted them for their beliefs.

The first anti-Mormon argument thus focuses on the fact that Joseph had a firearm and that he used that firearm to defend himself. Is it possible that Joseph's announcement that he was going “as a lamb to the slaughter” is false, since he fought back?

Anyone who has ever worked on a farm or in a slaughterhouse knows that sheep do not go willingly to the slaughter. They kick and buck, bleat, scream, and make every attempt to escape their fate. In fact, they make such a haunting sound, that the title of an extremely popular Hollywood film was based on it: The Silence of the Lambs. The term “lamb to the slaughter” simply refers to the inevitability of the final outcome. No matter how valiantly they struggle, the fate of the sheep is sealed. If we apply this understanding to Joseph Smith and his brother, it is clear that they truly were slaughtered like lambs. Fight as they might, they were doomed. 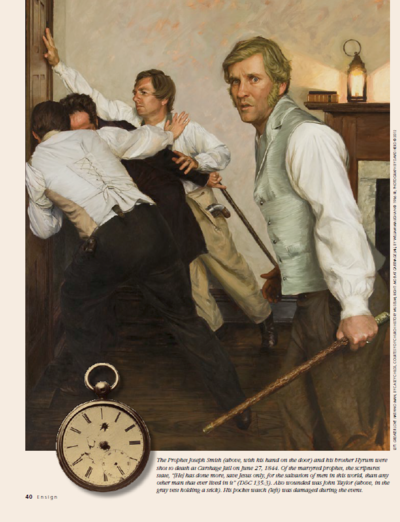 Ensign (June 2013): 40, shows Joseph with the pepperbox pistol he would fire to defend himself and others prior to his murder.