Hostile critics of the Restoration often mock the Latter-day Saint practice of wearing temple garments. They refer to these ritual items of clothing as "magic underwear" or "Mormon burquas' in order to shock, ridicule and offend.

Latter-day Saints wear the garment as a private reminder of covenants and promises made to God. The blessings and protection which derive from it come by God's will through keeping the covenants associated with it. The promised protection is primarily spiritual, but this does not mean that God may not also grant physical protection as he sees fit. In either case, the blessing is not because of the clothing, it is because of what the clothing represents.

Latter-day Saints are in good company with the early Christians, who used similar clothing as part of their worship. Other religions likewise use items of clothing which they consider to have sacred significance.

To mock or demean these items is in the poorest taste, and not worthy of anyone who claims to be a disciple of Christ. Patriotic readers might consider how they would feel if someone took a flag ("a mere piece of cloth") and burned or soiled it in anger at a protest or demonstrations. Our negative reaction to this is not the disrespect to an object, but what the object represents.

Members of the Church are often subjected to critics who picket their meetings and temple dedications. It is not unusual for such protesters to openly display Latter-day Saint temple garments, subject them to ridicule, and treat them with great disrespect. Protesters and authors alike have insisted that the Latter-day Saint use of temple garments is an un-Christian and unbiblical practice. (See here for photos and videos of several anti-Mormon demonstrations. Click here for a graphic example of disrespect to an item considered sacred by Latter-day Saints)

Such treatment of an object connected with sacred worship is highly offensive to Latter-day Saints. Only an attack on the character or name of Jesus Christ would be worse, since the garment is closely connected with the Savior's own teachings and attributes. (See Evelyn T. Marshall, "Garments," in Daniel H. Ludlow, ed., Encyclopedia of Mormonism [New York: Macmillan, 1992], 534-35).

Misrepresentations of the purpose of the garment by critics 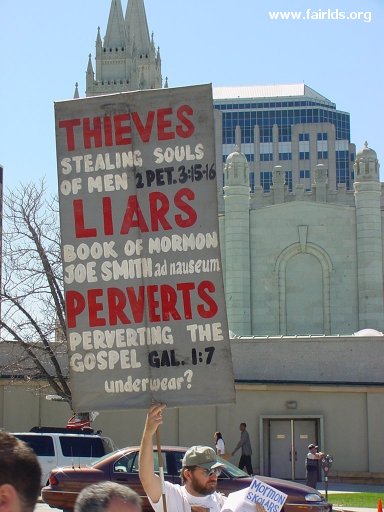 An anti-Mormon protester at April 2004 LDS General Conference criticizes the LDS use of the temple garment.

In the critical book Mormonism 101. Examining the Religion of the Latter-day Saints, under the heading of Pre-endowment Instructions, the authors enter into a discussion on the nature of the 'temple garments.' In regard to this vestment, the authors write: "By wearing the garments at all times, it is taught that the individual Mormon, depending on his or her faithfulness, is protected both physically and spiritually." [1] It is apparent from the ensuing discussion that rather than focusing on the fundamental belief in the 'spiritual protection' offered by this clothing that the authors, in trying to sensationalize their account, are much more interested in the idea of 'physical protection.' At the end of their book section they compare the garment to a "proverbial rabbit's foot or talisman." In an attempt to bolster this claim they utilize a quotation from a prominent LDS leader -- Spencer W. Kimball -- which seems, at a quick glance, to support such an interpretation. The quote reads as follows:

"Temple garments afford protection. I am sure one could go to [the] extreme in worshiping the cloth of which the garment is made, but one could also go to the other extreme. Though generally I think our protection is a mental, spiritual, moral one, yet I am convinced that there could be, and undoubtedly have been, many cases where there has been, through faith, an actual physical protection. So we must not minimize that possibility." [2]

President Kimball here expresses his view that the protection is generally spiritual, though one cannot rule out the possibility that God could grant physical protection as well. Surely the Lord can dispense blessings as He sees fit.