Question: What does the term "anti-Mormon" mean?

Question: What does the term "anti-Mormon" mean?

There are misinterpretations and misrepresentations of us and of our history, some of it mean-spirited and certainly contrary to the teachings of Jesus Christ and His gospel. Sometimes clergy, even ministerial organizations, oppose us. They do what we would never do. We do not attack or criticize or oppose others as they do us...Strangest of all, otherwise intelligent people claim we are not Christian. This shows that they know little or nothing about us. It is a true principle that you cannot lift yourself by putting others down.[1]

Those who are "Anti-" some thing oppose and fight against that thing. Anti-Mormons spend their efforts in opposing Mormonism instead of preaching their own beliefs. The label "anti-Mormon" is thus accurate and appropriate.

Members of the Church wish only to share their own beliefs, and not attack the beliefs of others. They generally consider other believers to be well-intentioned, and hope that they can add to the truths which others already have.

FairMormon's mission is only to defend LDS doctrine, history, leaders, and practice from illegitimate attacks by critics. It does not desire to criticize the faith or beliefs of others. If readers note any violations of this policy in FairMormon's materials, they are requested to bring it to our attention.

Not everyone who disagrees with the LDS Church is "anti-Mormon"

An anti-Mormon protester at the Church's 2003 Mesa Easter Pageant expresses his view that "Mormonism is worse than child molesting homosexuals." Most anti-Mormon writers do not reach this level of vitriol, though some do. Unfortunately, a thriving anti-Mormon book and video industry spreads the misinformation that encourages such views and behavior.

FairMormon and other apologetic organizations tend to use the term "anti-Mormon" when it is an accurate description of an author and his/her tactics.

FairMormon does not believe or argue that everyone who disagrees with the LDS Church is "anti-Mormon." As one prominent scholar of anti-Mormonism put it:

The hallmark of anti-Mormonism is an agenda, whether covert or openly expressed, of combating the faith of the Latter-day Saints and opposing their church.[2]

It is somewhat strange that critics of the Church wish to somehow divest the term "anti-Mormon" of its clear meaning.[3] It is composed of two elements:

Noun: "A person who is opposed to something, such as a group, policy, proposal, or practice"
Adjective: Opposed
Preposition: Opposed to; against.[4]

2) ...and Mormon, as a colloquial term for The Church of Jesus Christ of Latter-day Saints. 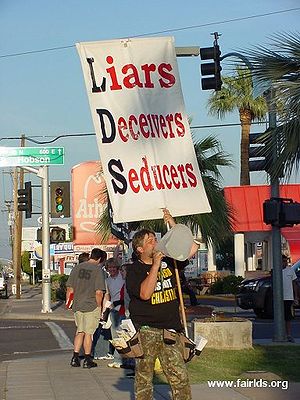 An Anti-Mormon protester at the 2004 Mesa Easter Pageant uses a megaphone and an equally unsubtle written message.

The term "anti-Mormon" is a descriptive term for those whose tactics or desires oppose or fight against the beliefs, members, or practices of the Church

"Anti-Mormon" is not a slur nor is it pejorative in its use; it is a descriptive term for those whose tactics or desires oppose or fight against the beliefs, members, or practices of the Church. Being "anti-" something may be a positive or negative thing, depending upon one's perspective. Almost everyone would be happy to be considered "anti-child abuse." Few people would want to be known as "anti-Semitic."

Characteristic of anti-Mormon tactics, aims, and behavior is their tendency to not preach their own faith, or tell Church members what they believe. Anti-Mormon authors seem to want to spend most of their time telling us that Mormons are wrong. They are, therefore, "anti-Mormon."

Anti-Mormons may have noble or base motives. They may be sincere or insincere. Their criticisms may be well-founded or baseless. The term "anti-Mormon" only describes their approach, goals, and tactics.

The stated or implicit goal of anti-Mormons is to prevent investigators from joining the Mormon Church, and to encourage Mormons to abandon their faith. They fight against the Church. Apologists would not label them anti-Mormon if they were among the many people evangelizing for their faith by encouraging people to join their faith, preaching for something rather than against something.

But, strange to say, some Christians do attack other Christians' beliefs. Of course, we know that Christians do not agree on all points—otherwise, there would be only one Christian denomination, not thousands. Anti-Mormons make up a very small proportion of Christians, but they are rather a vocal minority.

That being said, it should be noted that not all anti-Mormons are Christians. Anti-Mormons could (and have) come from non-Christian belief systems, or from the ranks of atheists and agnostics. Again, the determining factor is whether the individual preaches against the Mormon belief system rather than for their own belief system:

It should be noted that there is nothing unusual about the labels anti-Mormon or anti-Mormonism. Nothing in the prefix anti- implies that those individuals or agencies linked to this compound word advocate or participate in violence or are mean-spirited, unsophisticated, evil, irrational, and so forth. When an individual or agency either self-identifies or is identified by the LDS community as anti-Mormon, what is meant is merely that they oppose, dispute, or are against the well-established beliefs of the Saints. When they publish essays and books in which they clearly oppose the crucial core beliefs of the Saints, it seems odd for critics to express desires to avoid being known as "anti-Mormon."[5]

Anti-Mormon authors use the term "anti-Mormon" themselves

Jerald and Sandra Tanner, some of the most well known anti-Mormon writers, use the term "anti-Mormon" to refer to others who oppose the Church of Jesus Christ of Latter-day Saints. In their book The Changing World of Mormonism, the Tanners use the term fourteen times.[6]