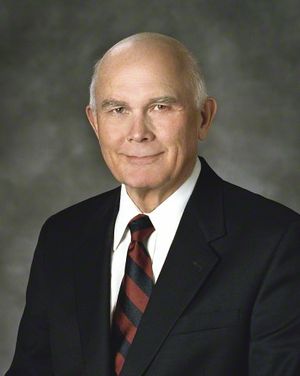 [W]e’re emerging from a period of history writing within the Church [of] adoring history that doesn't deal with anything that’s unfavorable, and we’re coming into a period of “warts and all” kind of history. Perhaps our writing of history is lagging behind the times, but I believe that there is purpose in all these things — there may have been a time when Church members could not have been as well prepared for that kind of historical writing as they may be now.

On the other hand, there are constraints on trying to reveal everything. You don’t want to be getting into and creating doubts that didn't exist in the first place. And what is plenty of history for one person is inadequate for another, and we have a large church, and that’s a big problem. And another problem is there are a lot of things that the Church has written about that the members haven’t read. And the Sunday School teacher that gives “Brother Jones” his understanding of Church history may be inadequately informed and may not reveal something which the Church has published. It’s in the history written for college or Institute students, sources written for quite mature students, but not every Sunday School teacher that introduces people to a history is familiar with that. And so there is no way to avoid this criticism. The best I can say is that we’re moving with the times, we’re getting more and more forthright, but we will never satisfy every complaint along that line and probably shouldn't.

Summary: One critic of Mormonism claims that Dallin Oaks told Mormons in 1995 "that so-called Christianity sees God as an entirely different kind of being." However, Elder Oaks made no such claim.

Summary: Elder Dallin Oaks discusses the issue of church history and facts that are not discussed frequently in church approved curriculum during an interview with Helen Whitney (HW) for the PBS documentary, The Mormons.[2]

Elder Oaks stated that "it’s wrong to criticize leaders of the Church, even if the criticism is true"

Summary: Elder Dallin Oaks discusses criticism of Church leaders during an interview with Helen Whitney (HW) for the PBS documentary, The Mormons.

Elder Dallin H. Oaks has served as a member of the Quorum of the Twelve Apostles of The Church of Jesus Christ of Latter-day Saints since May 1984.