You are here: Home / Archive / Publications / Is Nauvoo a Hebrew Word?

Q. While visiting Nauvoo I happened to wander into a Christian bookstore. The proprietor claimed that Joseph Smith couldn’t be a true prophet because he didn’t even know that Nauvoo isn’t a Hebrew word. She said that Joseph Smith just made it up and it is just one more evidence that he was a fraud. Is this true?

A. (by Kevin Barney) I’m surprised that this woman has lived in Nauvoo but still believes Fawn Brodie’s mistaken argument that Nauvoo isn’t a real Hebrew word.

Brodie, in the first edition of her book No Man Knows My History, a highly critical biography of Joseph Smith, says:

When Joseph Smith stood on this hill after his escape from Missouri in 1839, the spot was wooded and trackless and swamps covered the lowlands behind him. But he could see the glistening river with its islands lying to the north like lush garden places, and the green Iowa hills beyond. ‘It is a beautiful site,’ he said fervently, ‘and it shall be called Nauvoo, which means in Hebrew a beautiful plantation.’ The name sprang fresh out of his fancy, and though a few of his pedant followers were troubled that the word was not listed in their Hebrew dictionaries, most of the Saints were pleased with the choice. “Nauvoo” had the melancholy music of a mourning dove’s call and somehow matched the magic of the site.” [Fawn M. Brodie, No Man Knows My History, First Edition (New York: Alfred A. Knopf, 1945), 156, emphasis added.]

In subsequent editions, this quote was changed to recognize the validity of Nauvoo as a real Hebrew word. However, some people, like the bookstore owner in Nauvoo, still forward such arguments.

Nauvoo is in fact a real Hebrew word. It appears in Isaiah 52:7 and Song of Solomon 1:10. It is the pilel form of the verb na’ah; in modern transliteration we would write it na’wu. It means “to be comely.” Joseph gave the word in the Sephardic transliteration system he learned from Joshua Seixas; in fact, the word Nauvoo is given in the Seixas grammar (see below).

The following is a copy of a page from the Hebrew Grammar that Joshua Seixas used to teach the language to Joseph Smith while at Kirtland. 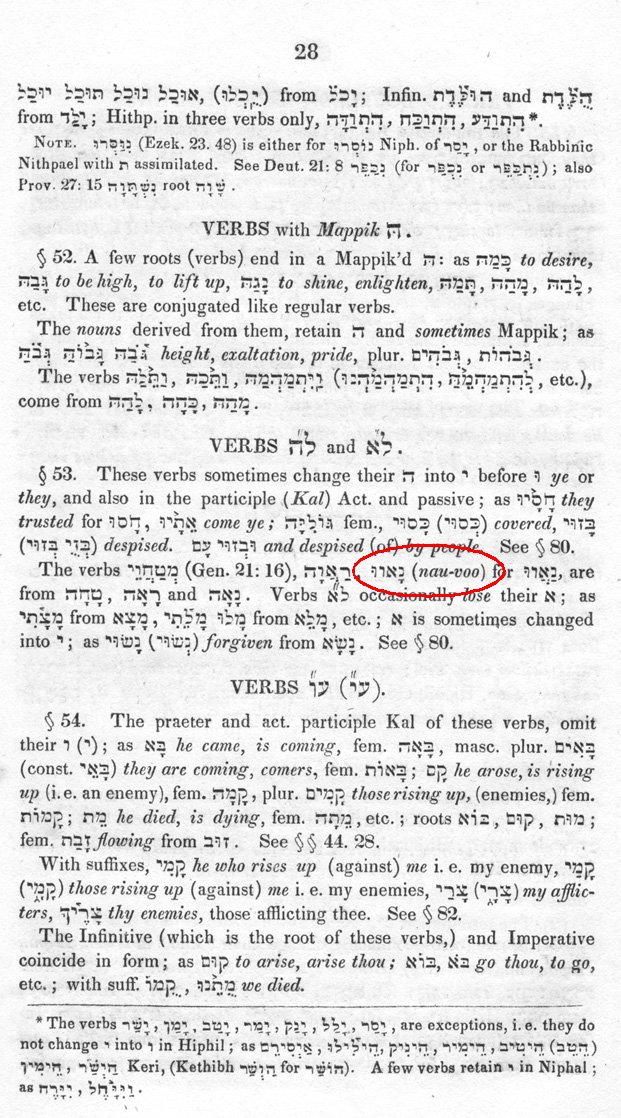