The Eight Witnesses of the Book of Mormon 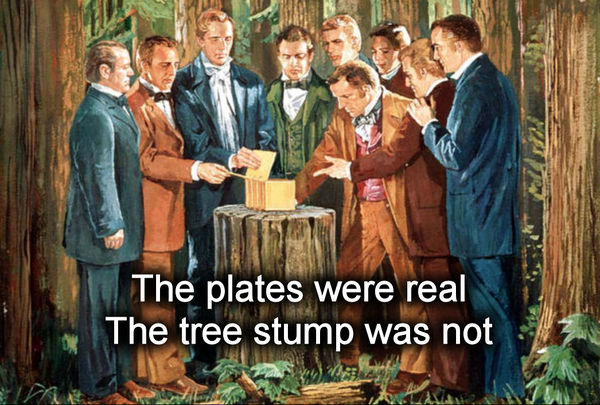 And I said..."it’s a matter of fact sort of experience: they go out in a clearing in the woods. There are the plates on a tree stump, they heft them and all this sort of thing," and he said “There was no tree stump.” And we went back and forth and back and forth about this stupid tree stump. And I finally said, “Look, OK. I will grant you no tree stump if you will grant me the plates...because I don’t care about the tree stump.” But in the meantime, I wrote a letter to my friend Richard Anderson...who I think is one of the great historians in the Church, and he’s the great authority on the witnesses. And I said, “Richard, help me. I cannot find a source indicating there’s a tree stump.” And he said, “Oh yeah, definitely there is, there is. I’ll get it back to you.” A few days later he calls and he says, “You know, I can’t find any mention of a tree stump.” And we both finally decided it was that stupid picture that gave us the idea. There’s actually no account that mentioned a tree stump. So, pictures can form your image, but you have to be careful you’re always controlling those images by looking at the actual data.

John Whitmer published his witness to the plates, and reaffirmed the written testimony of the Eight Witnesses published in the Book of Mormon:

It may not be amiss in this place, to give a statement to the world concerning the work of the Lord, as I have been a member of this church of Latter Day Saints from its beginning; to say that the book of Mormon is a revelation from God, I have no hesitancy; but with all confidence have signed my named to it as such; and I hope, that my patrons will indulge me in speaking freely on this subject, as I am about leaving the editorial department. Therefore I desire to testify to all that will come to the knowledge of this address; that I have most assuredly seen the plates from whence the book of Mormon is translated, and that I have handled these plates, and know of a surety that Joseph Smith, jr. has translated the book of Mormon by the gift and power of God, and in this thing the wisdom of the wise most assuredly has perished: therefore, know ye, O ye inhabitants of the earth, wherever this address may come, that I have in this thing freed my garments of your blood, whether you believe or disbelieve the statements of your unworthy friend and well-wisher.[2]

John Whitmer (1876): "I have never heard that any one of the three or eight witnesses ever denied the testimony that they have borne to the Book as published in the first edition of the Book of Mormon"

In 1876, John Whitmer, one of the Eight Witnesses, wrote a lengthy letter to Mark Forscutt, which included the following:

Oliver Cowdery lived in Richmond, Mo., some 40 miles from here, at the time of his death. I went to see him and was with him for some days previous to his demise. I have never heard him deny the truth of his testimony of the Book of Mormon under any circumstances whatever. . . . Neither do I believe that he would have denied, at the peril of his life; so firm was he that he could not be made to deny what he has affirmed to be a divine revelation from God. . . .

I have never heard that any one of the three or eight witnesses ever denied the testimony that they have borne to the Book as published in the first edition of the Book of Mormon. There are only two of the witnesses to that book now living, to wit., David Whitmer, one of the three, and John Wh[itmer], one of the eight. Our names have gone forth to all nations, tongues and people as a divine revelation from God. And it will bring to pass the designs of God according to the declaration therein contained.[3]

Turley claimed that John Whitmer said: "I now say I handled those plates. there was fine engravings on both sides. I handled them...and they were shown to me by a supernatural power."

[Theodore] Turley said, ‘Gentlemen, I presume there are men here who have heard [John] Corrill say, that Mormonism was true, that Joseph Smith was a prophet, and inspired of God. I now call upon you, John Whitmer: you say Corrill is a moral and a good man; do you believe him when he says the Book of Mormon is true, or when he says it is not true? There are many things published that they say are true, and again turn around and say they are false.’ Whitmer asked, ‘Do you hint at me?’ Turley replied, ‘If the cap fits you, wear it; all I know is that you have published to the world that an angel did present those plates to Joseph Smith.’ Whitmer replied: ‘I now say, I handled those plates; there were fine engravings on both sides. I handled them;’ and he described how they were hung [on rings], and [said] ‘they were shown to me by a supernatural power;’ he acknowledged all.[4]

So, the apostate Whitmer insists that he physically handled the plates, and attests to having seen fine engraving "on both sides." Even when apostate, he would not deny what he had seen, but had to claim that he couldn't know if the translation was accurate, since he had no witness of that.

This category has the following 2 subcategories, out of 2 total.

The following 4 pages are in this category, out of 4 total.