Mention of the “wild goat” may at first seem peculiar. Biblical animals that could be eaten under the Law of Moses included the “goat” and the “wild goat” (Deuteronomy 14:4-5). In post-biblical Jewish literature some Jewish writers distinguished between wild and domestic cattle such as goats. Both were considered clean and could be eaten, but only the domestic variety was thought acceptable for sacrifice. [2] .... The only native wild goat in North America is the Mountain Goat, Oreamnos americanus. Its geographic range, though, currently only extends south from southwest Alaska down to the northwest United States. Even with a possible extended range for this animal during Book of Mormon time, it is extremely unlikely it got as far south as Mesoamerica. A closely related, but extinct, species is Oreamnos harringtoni. This goat did have a much more southerly distribution, extending into Mexico. While this goat might have survived much past the terminal Pleistocene along with other animals, there is not sufficient evidence yet for this.

It has already been indicated that a referenced animal in the Book of Mormon could actually be something somewhat different, but had a similar appearance. There is an animal now living in Mesoamerica that fits this description, the Red Brocket deer, Mazama americana. Unlike other deer it has but a single goat-like horn – which is really an antler that is shed and regrown annually like other cervids. [3] 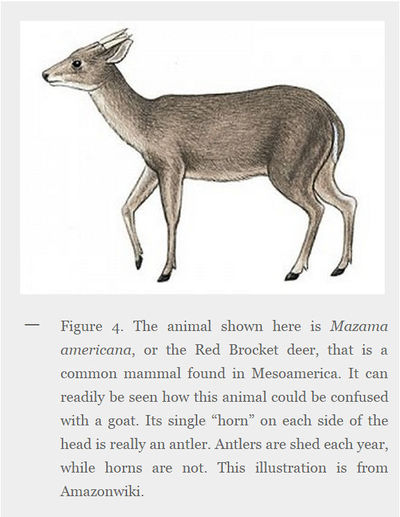