A Visita de Morôni/Moroni teria bateu a cabeça no teto

Moroni would have struck his head on the ceiling of Joseph's room?

Question: Would the angel Moroni have struck his head on the ceiling when he appeared to Joseph Smith in his room?

The entire argument is baseless, as a quick glance at a photo of the room in question will reveal

Some critics actually claim that when Moroni appeared to Joseph Smith in his room on September 21, 1823, the roof would have been too low to allow an angel to stand above the floor "in the air" without hitting his head on the roof. As one critical website notes:

Also, Moroni must have been a very short man to be able to float significantly off the floor and yet have his head beneath the rather short ceiling of the room Joseph slept in.[1]

They claim that this 'fact' is evidence of Joseph's fabrication or hallucination of the experience.

The entire argument is baseless, as a quick glance at a photo of the room in question will reveal. 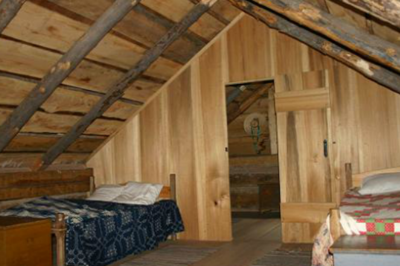 Do we not believe that an all-powerful God could not deal with this situation?

This is probably one of the most bizarre claims FairMormon has ever seen, and that's saying something.

One can see at a glance that Moroni would be at no risk of striking his head. Note the high, peaked roof that would seem to provide ample room. The beds and doorway provide scale. On what grounds does MormonThink label this a "rather short ceiling"? Amazingly, MormonThink even has a photo like the one at the left, but they still want to convince their readers that there's not enough angelic headroom.

And, why didn't Joseph's family immediately understand that this claim was unfeasible? They clearly understood that the dimensions of the room were not an obstacle to an account that was certainly incredible on other grounds.