The Law of Adoption: The sealing of men and women as children to prominent Latter-day Saint leaders

Question: What is the "Law of Adoption" practiced among 19-century Mormons and why has it changed?

Since few of the Church members had ancestors within the young Church, they often chose to seal themselves to prominent Church leaders such as Joseph Smith or Brigham Young

Joseph Smith was very anxious to have the Saints sealed—since few of the Church members had ancestors within the young Church, they often chose to seal themselves to prominent Church leaders such as Joseph Smith or Brigham Young. The key understanding was that an unbroken chain of sealing was required, to bind the whole world into a single human family.

President Wilford Woodruff explained how he and other Church presidents had felt about the matter:

I have not felt satisfied, neither did President Taylor, neither has any man since the Prophet Joseph who has attended to the ordinance of adoption in the temples of our God. We have felt that there was more to be revealed upon the subject than we had received. Revelations were given to us in the St. George Temple, which President Young presented to the Church of God. Changes were made there, and we still have more changes to make, in order to satisfy our Heavenly Father, satisfy our dead and ourselves. I will tell you what some of them are. I have prayed over this matter, and my brethren have. We have felt as President Taylor said, that we have got to have more revelation concerning sealing under the law of adoption."

President Woodruff then announced to the General Conference and particularly to the presidents of the four temples in Utah that he had gone "before the Lord" to know who he should be adopted to and that the "Spirit of God" instructed him that he should be sealed to his natural father. Prior to this time it had been the practice to be sealed to the "prophets and apostles" in the Church. President Woodruff now pronounced the prior practice an incorrect procedure and called upon the membership of the church to accept as a revelation this announcement, which incidentally he had previously presented to his counselors and to the Quorum of Twelve Apostles. [1]

The Church believes in modern prophets, which would be a superfluous fixture of the Church were it not for the belief in on-going revelation:

For behold, thus saith the Lord God: I will give unto the children of men line upon line, precept upon precept, here a little and there a little; and blessed are those who hearken unto my precepts, and lend an ear unto my counsel, for they shall learn wisdom; for unto him that receiveth I will give more; and from them that shall say, We have enough, from them shall be taken away even that which they have.(2  Nephi 28:30)

Critics—often coming from a fundamentalist perspective—assume that nothing should change in the Church. But, the Church is a revealed religion that believes in on-going revelation. The Saints consider change in practice and expansion of doctrinal understanding to be a strength, not a weakness. Those who want no change in their religious practice or understanding will likely be disappointed in the Church of Jesus Christ.

Question: What is the history behind the Mormon practice called the "Law of Adoption"?

The idea of sealings has undergone a number of changes over time, as we have had new revelation, and as our notion has been developed and better understood. This is a drawing of the Celestial Kingdom along with its description published by Apostle Orson Hyde in 1847, which shows how members and leaders were thinking about the matter then: 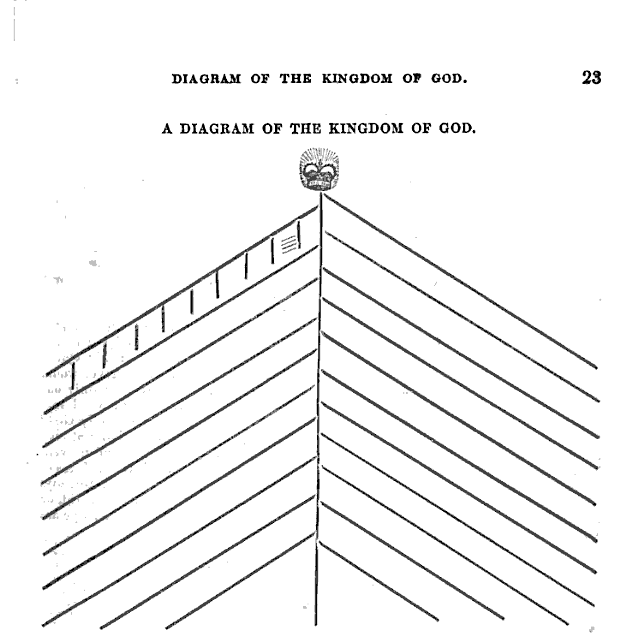 The above diagram shows the order and unity of the kingdom of God. The eternal Father sits at the head, crowned King of kings and Lord of lords. Wherever the other lines meet, there sits a king and a priest unto God, bearing rule, authority, and dominion under the Father. he is one with he Father, because his kingdom is joined to his Father's and becomes part of it. … The most eminent and distinguished prophets who have laid down their lives for their testimony (Jesus among the rest), will be crowned at the head of the largest kingdoms under the Father, and will be one with Christ as Christ is one with his Father; for their kingdoms are all joined together, and such as do the will of the Father, the same are his mothers, sisters, and brothers. ... It will be seen by the above diagram that there are kingdoms of all sizes, an infinite variety to suit all grades of merit and ability. The chosen vessels unto God are the kings and priests that are placed at the head of these kingdoms. These have received their washings and anointings in the temple of God on this earth; they have been chosen, ordained, and anointed kings and priests, to reign as such in the resurrection of the just. Such as have not received the fullness of the priesthood, (for the fullness of the priesthood includes the authority of both king and priest) and have not been anointed and ordained in the temple of the Most High, may obtain salvation in the celestial kingdom, but not a celestial crown. Many are called to enjoy a celestial glory, yet few are chosen to wear a celestial crown, or rather, to be rulers in the celestial kingdom."[3]

Ehat and Cook wrote of this diagram in their discussion of Joseph Smith's Nauvoo-era teachings:

According to the teachings that the Prophet gave in private (but which he only hinted at in this discourse [13 August 1843]), to be heir to Abraham's promise that he would head an innumerable posterity, each individual and his children must be sealed for time and eternity. If this sealing was performed, he taught, the covenant relationship would then continue throughout eternity. The Prophet taught, moreover, that such a patriarchal priesthood of kings and priests would have to be established by sealing children and parents back through Abraham to Adam in order to fulfill the mission of Elijah (Mal. 4:5-6). When this was accomplished, the order within the highest degree of the Celestial Kingdom would then be eternally set. Probably no clearer statement of Joseph's theology regarding this concept can be found than what is given in an editorial by Orson Hyde.[4]

Now what you may notice immediate is that this doesn't look like any picture of the Celestial Kingdom you might find in a discussion of the Plan of Salvation today, does it? In fact, our current version (with three degrees in the Celestial Kingdom) doesn't get introduced to the Church until 1878, and Section 131 (which we usually use as the doctrinal basis for that teaching today) enters the Canon of scripture in 1880. But this concept of the Celestial Kingdom is essential to understanding some of what is happening with Nauvoo-era sealings.

Most of these sealings of adoption were between members and General Authorities (members of the First Presidency, Apostles, and so on). Because those individuals were considered to be part of the top tier of the hierarchy of the Celestial Kingdom. And so to be sealed to one of them meant that at the very least you would be in one of these larger kingdoms closer to God. If you were sealed to someone else, you might fall much further down the hierarchy. We see this in action as the Church is forced out of Nauvoo. In Winter Quarters, for example, Wilford Woodruff described in his journal that the people had divided into 'tribes'. And some of the people took these sealings of adoption absolutely literally. John D. Lee, for example, consistently described himself as Brigham Young's son, even though he had no biological relationship to him - only this sealing.

Eventually, these sealings of adoption were abandoned (as the LDS people came to understand the doctrine of sealings better), and then later this model of the Celestial Kingdom was also abandoned to be replaced eventually with the model we have today.

The idea didn't exist completely in LDS thought of the entire human family as a single sort of equal body as God's children in the Celestial Kingdom. So the sealings were meant to create connections to create an organizing structure (a new family of God - that took more literally the language of scripture of being adopted into the family of God - e.g. Eph. 1:5 or Gal. 4:5), and the family structure of the family of God was understood to be much more complicated than we view it today. And the notion of doing these sealings for the dead really is just beginning at the time that Joseph Smith is killed - there isn't yet a sense in Orson Hyde's description that everyone would receive the ordinances of the temple - either in their own lifetime or by proxy).