According to David Whitmer, each of the Three Witnesses added their signatures to the original Book of Mormon manuscript:

In September, 1878, in company with Apostle Orson Pratt, the writer visited David Whitmer, at Richmond, Ray County, Missouri. In the presence of David. C. Whitmer, the son of Jacob, Philander Page, David J. Whitmer, son of David Whitmer, George Scheweich, Col. James W. Black, J. R. B. Van Cleave and some others, Father David Whitmer was asked if the three witnesses signed their own names to their testimony to the Book of Mormon? Father Whitmer unhesitatingly replied with emphasis:

"Yes, we each signed his own name."

"Then," said the questioner, "how is it that the names of all the witnesses are found here, (in D. W's manuscript) written in the same hand writing?"

This question seemed to startle Father Whitmer, and, after examining the signatures he replied:

"Oliver must have copied them."

"Then, where are the original documents?" was asked.

David Whitmer (1885): they "were present and ordered Oliver Cowdry [sic] to sign for them"

By 1885, in an interview with James Henry Moyle, Whitmer seems to have been clearer on how his copy of the manuscript came to be:

"The witnesses did Dav not sign the original manuscript though [they] were present and ordered Oliver Cowdry to sign for them."[2]

It is telling that this material is in an account cited by the CES Letter, but the author does not include it. A footnote which accompanies this section reads:

Moyle himself noted in his diary, "The statement that the three witnesses did not sign the manuscript but that Oliver Cowdery signed for them and at their request is doubtless true as to the copy which David Whitmer had. The writing itself indicates that. Joseph Fielding Smith, church historian, says his father said that in his interview and that of Orson Pratt, David Whitmer admitted that the three witnesses signed the original manuscript." Whitmer was unaware that two manuscript copies of the Book of Mormon had been made and that the manuscript in his possession was the second copy that Cowdery had prepared for the printer.[3]

Frederick Kessler stated that he observed Joseph Smith placing the manuscript in the cornerstone of the Nauvoo House:

Further facts in relation to the manuscript of the Book of Mormon. I saw the Prophet Joseph Smith, Jr., hide up the above manuscript unto the Lord in the south-east corner of the Nauvoo House, Illinois. I stood within eight or ten feet of him, heard and saw what he said and did, on that important occasion, which I freely testify to all the world.

The contents of the cornerstone of the Nauvoo House were the following:

The corner stone of the Nauvoo House was laid by President Joseph Smith on the 2nd of October, 1841, and the following articles were deposited therein by the President, to-wit:

A Book of Mormon; a revelation given January 19, 1841; The Times and Seasons, containing the charter of the Nauvoo House; Journal of Heber C. Kimball; the memorial of Lyman Wight to the United States Senate; a book of Doctrine and Covenants, the first edition; No. 35 of the Times and Seasons; The original manuscript of the Book of Mormon; The Persecutions of the Church in the State of Missouri, published in the Times and Seasons; the Holy Bible. Silver coins as follows: one half-dollar, one quarter-dollar, two dimes, two half-dimes, and one copper coin.[5]

Only 28 percent of the original manuscript survived

Additional photos of the fragments of the original manuscript that survived may be viewed in Dr. Royal Skousen's presentation "Restoring the Original Text of the Book of Mormon" (5 August 2010).

Royal Skousen describes what happened to the original manuscript,

28 percent of the original manuscript is extant. (In calculating this percentage, I exclude the 116 pages that were lost by Martin Harris in 1828.) In 1841 Joseph Smith placed the original manuscript in the cornerstone of the Nauvoo House, a hotel being built in Nauvoo. And the manuscript lay there in the cornerstone for the next 41 years until in 1882 Lewis Bidamon, the second husband of Emma Smith’s, after her death, retrieved the manuscript. Most of it was severely damaged by water that had seeped in as well as by mold that ate away a lot of the manuscript. Bidamon gave most of the larger manuscript portions to LDS people, and so 25 of that 28 percent has ended up in the archives of the LDS Church. There is half a leaf at the University of Utah. And the equivalent of a leaf in fragments is held privately. Most important for this project has been the discovery of two percent of the text that Wilford Wood bought from Charles Bidamon, the son of Lewis Bidamon, in 1937....[Showing photos of the original manuscript] This is one of the fragments from 2 Nephi 7-8, all rolled up. First, it was unraveled, and you can see on the edges where the mold had eaten away parts of the leaf. You can also see the large water stain in the center, from water that had originally gotten into the cornerstone. After the fragment was leveled and photographed, you can see basically what it is. The text is in the hand of Oliver Cowdery; the ink was originally black and has turned brown over time. [6] 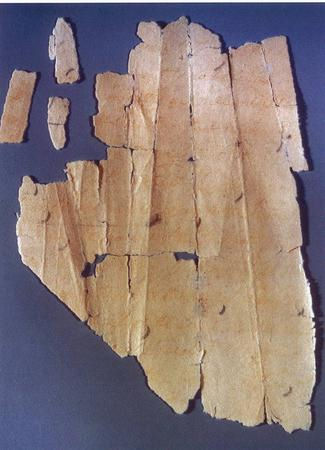 Fragment of original manuscript of the Book of Mormon showing Helaman 15 9-14. Photographs of original manuscript as presented in Royal Skousen's presentation are courtesy of David Hawkinson and Robert Espinosa reproduced by permission of the Wilford Wood Foundation. This image was used in Sarah Petersen, "BYU professor Royal Skousen concludes his discussion on changes to the Book of Mormon original text," Deseret News (19 March 2013). off-site

The printer's manuscript was copied from the original manuscript by Oliver Cowdery, including the witness statements

Critics of the Church also fail to note that David Whitmer, in fact, made a point of affirming that his testimony was true just as it was printed in the Book of Mormon. 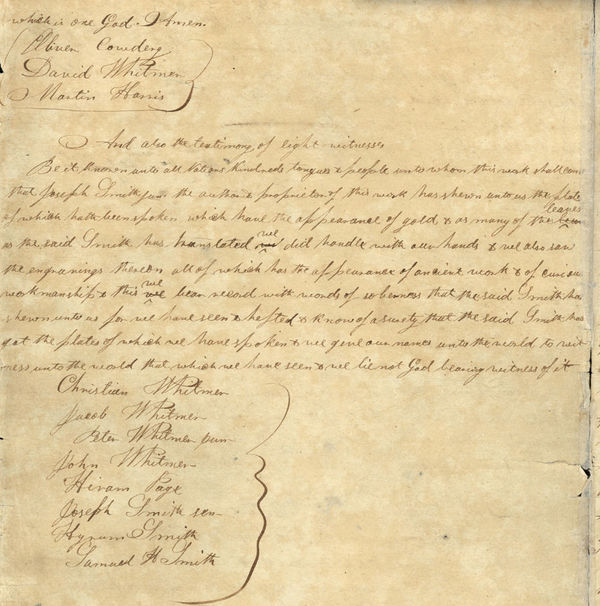 Witness signature page from the Printer's Manuscript. This was a copy of the original manuscript made by Oliver Cowdery in order to take pages to the printer without the risk of losing the original pages. These signatures appeared at the back of the 1830 Book of Mormon rather than the front as they do in modern editions. Image from the Joseph Smith Papers. off-site

John Whitmer (1876): "I have never heard that any one of the three or eight witnesses ever denied the testimony that they have borne to the Book as published in the first edition of the Book of Mormon"

In 1876, John Whitmer, one of the Eight Witnesses, wrote a lengthy letter to Mark Forscutt, which included the following:

Oliver Cowdery lived in Richmond, Mo., some 40 miles from here, at the time of his death. I went to see him and was with him for some days previous to his demise. I have never heard him deny the truth of his testimony of the Book of Mormon under any circumstances whatever. . . . Neither do I believe that he would have denied, at the peril of his life; so firm was he that he could not be made to deny what he has affirmed to be a divine revelation from God. . . .

I have never heard that any one of the three or eight witnesses ever denied the testimony that they have borne to the Book as published in the first edition of the Book of Mormon. There are only two of the witnesses to that book now living, to wit., David Whitmer, one of the three, and John Wh[itmer], one of the eight. Our names have gone forth to all nations, tongues and people as a divine revelation from God. And it will bring to pass the designs of God according to the declaration therein contained.[8]

"Mr. [John] Whitmer is considered a truthful, honest and law abiding citizen by this community, and consequently, his appointment [to preach] drew out a large audience. Mr. Whitmer stated that he had often handled the identical golden plates which Mr. Smith received from the angel...."[9]

The printer's manuscript of the Book of Mormon is entirely in Oliver Cowdery's handwriting, including the witness statements

The printer's manuscript is a copy of the original Book of Mormon manuscript. This copy was made by Oliver Cowdery and taken to the printer. Therefore, the entire document is in Oliver's handwriting. The original manuscript was placed in the cornerstone of the Nauvoo House.[10] Years later, it was removed and found to have been mostly destroyed by water damage. As a result of this, we do not have the portion of the original Book of Mormon manuscript containing the witness statements. It should be noted that in the 1830 Book of Mormon, the witness statements were included at the end of the book, rather than at the front as they are today.