While there is a trend in the general population for a decrease in religious activities when one becomes more educated, members of the Church are in stark contrast to this secularization

It is claimed that as a person becomes more educated, that they are more likely to become inactive or leave the Church. In order to avoid this, it is claimed that the Church Educational Systems (CES) deliberately promotes Gospel learning over secular learning.

While there is a trend in the general population for a decrease in religious activities when one becomes more educated,[1] members of the Church are in stark contrast to this secularization.

The classic study on this matter is Albrecht and Heaton's "Secularization, Higher Education, and Religiosity."[2]

As one example, note that Church attendance for Mormons actually increases as they gain more education: 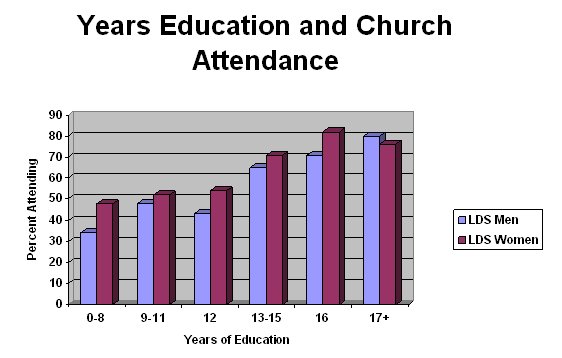 In the chart below there are five key factors of religiosity that are tracked among Latter-day Saints (RB=High value placed on religious beliefs, AW=Attends weekly, FT=Pays full tithe, PD=Prays daily and SG=Studies gospel). There is an increase among all five key religiosity factors when there is an increase in education, especially at the college level.[3] 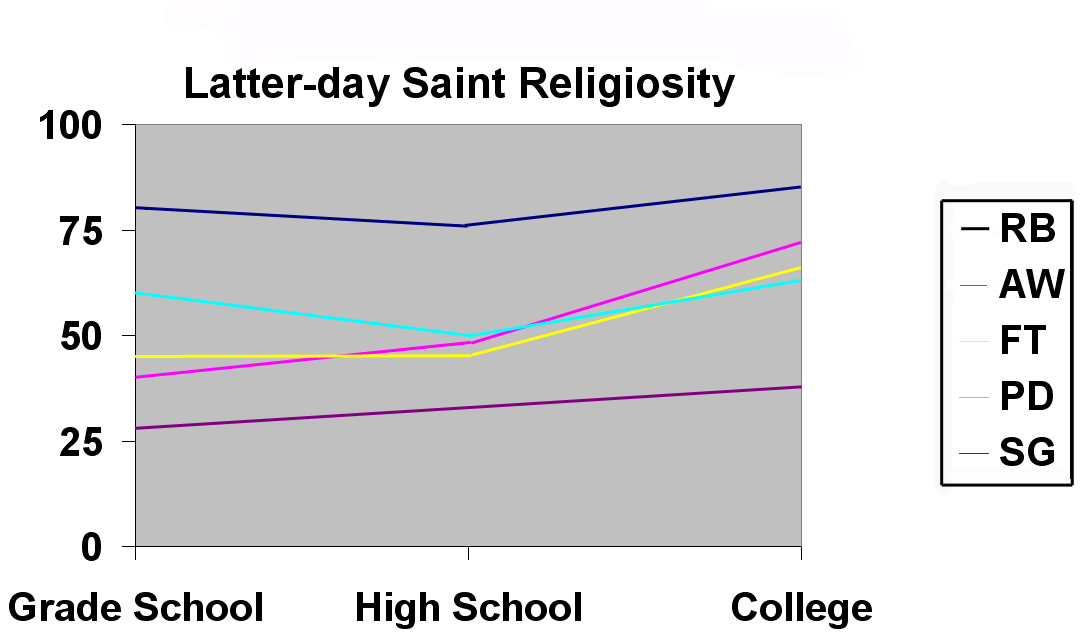 Other resources are available in the "Further reading" section below.

Among other things, such statistics put the lie to claims by critics that believing Mormons are either ignorant, dupes, or ill-informed. As members of the Church become better informed, they give more, not less, attention to their beliefs. This suggests that LDS beliefs provide a spiritually and intellectually satisfying aspect of their lives. Furthermore, the Church leadership places a strong emphasis on members furthering their secular education and merging that with their testimony. This has been the case since the time of Joseph Smith, from "Study and learn, and become acquainted with all good books, and with languages, tongues, and people." D&C 90:15 to "The glory of God is intelligence" D&C 93:36.

There is no prohibition on reading material critical of the Church

The Church encourages its members not to purchase anti-Mormon propaganda, for this only contributes money to their cause.

However, there is no prohibition on reading material critical of the Church. In the Ensign, the Church's official magazine, the question was asked, "Some people say it is best to leave alone materials that claim to 'expose' the Church and its teachings. What counsel has been given on this? How do we respond when a friend comes to us with questions found in such materials?" The reply given included these recommendations:

[Cautions about those who sell material aiming to destroy the Church] must not be interpreted to mean that the Church is against honest scholarship or has anything to fear or hide. Nor does the Church ban literature, but Latter-day Saints should be wise in choosing what to read.

This cautionary counsel should not be misconstrued to justify laziness on our part in seeking answers, or giving glib, superficial replies when someone sincerely wants to know the truth after being exposed to anti-LDS material. Church critics and enemies should not be permitted to make what Elder Neal A. Maxwell of the Quorum of the Twelve has sometimes called "uncontested slam dunks."

Latter-day Saints should be sufficiently grounded in their testimonies and knowledge of Church doctrine and history that they can answer questions in a non-contentious and informative way. Elder Marvin J. Ashton of the Quorum of the Twelve has instructed Church members not to retaliate against attacks. "We encourage all our members to refuse to become anti-anti-Mormon," he said (Ensign, Nov. 1992, p. 63). Paul taught that coming to Christ requires "speaking the truth in love" (Eph. 4:15). The First Presidency has encouraged Church members to convey their response to questions and criticism "in the form of a positive explanation of the doctrines and practices of the Church."[4]

Members should invite those with questions about Church doctrine and practices to read latter-day scriptures and to study the restored gospel, thus tasting the gospel fruit for themselves. Only then will they know "whether it be of God" (John 7:17).

When members lack answers, they should learn what Church leaders and reputable scholars have said and written. There is probably no charge against the Church that has not been adequately refuted by someone. When members can’t find answers on their own, they can turn to home and visiting teachers, quorum leaders, bishops, and stake presidents...Those willing to take time to research anti-LDS claims can find answers.[5]