Restoration of missing portions of the facsimiles

Summary: Part of the drawings (vignettes) on the papyri have been destroyed. Before the facsimiles were published, the missing sections were filled in. While it appears that Joseph or someone else "restored" these missing parts, non-LDS Egyptologists do not recognize these restorations as accurate. Critics charge that the sections that were filled in are incorrect, and that this proves that Joseph Smith was not a prophet.

Question: How were the missing portions of the Joseph Smith Papyri facsimiles restored?

It is not known who performed the "restoration" of the missing sections. It is likely that Joseph Smith or Reuben Hedlock (the engraver) simply filled in the lacunae in the papyri the best he could for purposes of publication. Modern documentary editing standards would require that any holes or gaps in the papyri be represented as such, but the Book of Abraham was published long before the rise of such standards. Just as it was the practice of the day to edit out infelicities rather than to preserve them (as modern scholars do), so it would have been thought inaesthetic to publish incomplete or marred facsimiles. If this is the correct explanation, one need not suppose that the textual repair for purposes of publication was the result of revealed insight. Some restorations were actually correct and/or were okay considering the message of the Book of Abraham. See here and here for more details.

Joseph was involved in the preparation of the plates of metal that were made for the purpose of publication, however.

Willard Richards recorded the involvement of Joseph Smith in his journal on:

Gave R. Hadlock [sic] instructions concerning the cut for the altar & Gods in the Record of Abraham. As designed for the Times & Seasons.[1]

"During the forenoon at his office. & printing office correcting the first plate or cut. of the Records of Father Abraham, prepared by Reuben Hadlock [sic] for the Times & Seasons [2]

As John Gee explains about this entry in "An Introduction to the Book of Abraham":

Examination of the metal plates that Hedlock used shows that Joseph Smith changed only the position of some of the numbers. The first installment of the Book of Abraham that was published in the Times and Seasons (vol. 2, no 9, containing Abraham 1:1-2:18 and Facsimile 1) is dated to 1 March but apparently did not actually come on this day.[3]

Exhibiting the Book of Abraham, in the original, To Bro Reuben Hadlock [sic], so that he might take the size of the several plates or cuts, & prepare the blocks for the Times & Seasons & also gave instructions concerning the arrangement of the writing on the Large cut, illustrating the principles of Astronomy."[4]

As John Gee explains about this journal entry in "An Introduction to the Book of Abraham":

The "large cut" was Facsimile 2, which was printed in a special foldout printed to size, and the image was larger than the page of the Times and Seasons[5]

Question: What portions of the image were missing from Facsimile 1?

For a number of years, scholars have debated whether the facsimile was damaged before or after Joseph acquired the papyri. It seems that the Book of Breathings scroll (containing Facsimile 1) was marred by a lacuna—a missing portion—that had torn off the scroll. The debate over the date of the lacuna directly relates to the images on Facsimile 1. This vignette—as shown in the LDS Book of Abraham—shows a figure (interpreted as Abraham) lying on a lion couch with arms raised as if attitude of pleading or prayer. The figure standing over Abraham is a bald man (presumably an Egyptian priest) with a knife in one hand—as if he was about to kill Abraham. Flying just above Abraham is a hawk (or falcon) with outstretched wings. The scroll's lacuna extends over an area which includes the Egyptian priest's head, the knife, and one of Abraham's supplicating arms. Photograph of Facsimile 1 from the recovered Joseph Smith Papyri 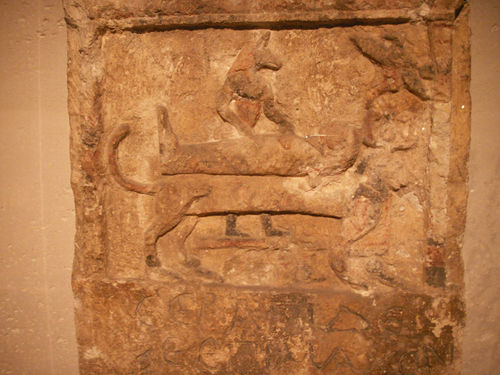 This photo of a lion couch scene was taken at the Louvre. Note the mummy-like appearance of the figure on the couch. The two legs are wrapped, unlike those of the figure in Facsimile 1. Also note that there is only one bird. 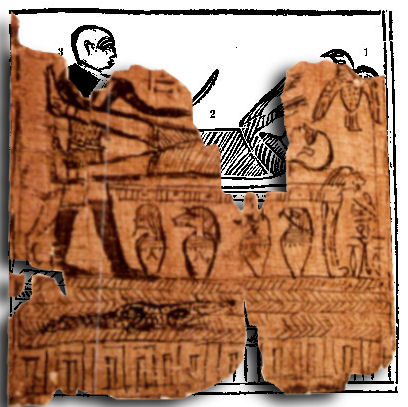 An overlay of the existing facsimile over the restoration. 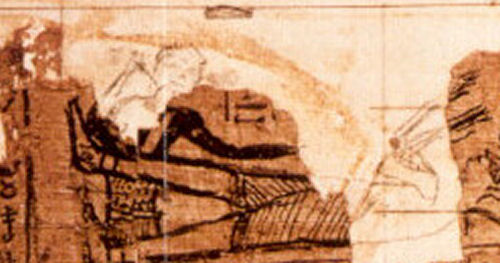 In the penciled in restoration, the knife is in the priest's right hand, and the face is viewed from the front.

Question: Was the head of the priest in Facsimile 1 incorrectly restored?

Since Facsimile 1 appears to be a fairly typical scene from Egyptian funerary texts, the critics note that other similar Egyptian motifs depict the priest (an embalmer) with the head of Anubis (an Egyptian god) rather than a bald, human head. Other comparable Egyptian embalming scenes do not show the priest holding a knife, they do not show any man pleading or praying, and they generally show two hawks.

Joseph interpreted this figure to be "The idolatrous priest of Elkenah attempting to offer up Abraham as a sacrifice." This figure is normally represented in lion couch scenes as having the jackal head of Anubis. If the portion of the priests head was indeed missing at the time that the facsimile was copied prior to its publication in the Times and Seasons, it may have been restored simply by copying the head of the figure lying on the lion couch. Unlike standards that would be following in publishing today, it was not considered acceptable at that time to publish a figure with missing gaps.

Joseph correctly interpreted the figure as a priest

Joseph correctly interpreted the figure as a priest. Whether the priest has a human head or is wearing the mask of Anubis makes no difference to the interpretation.

Question: When was the scroll containing Facsimile 1 damaged?

Many LDS scholars believe that the scroll was damaged after Joseph translated the vignette and some evidence seems to support this view. One early Latter-day Saint who saw the papyri in 1841, for instance, described them as containing the scene of an altar with "'a man bound and laid thereon, and a Priest with a knife in his hand, standing at the foot, with a dove over the person bound on the Altar with several Idol gods standing around it.'"[6] Similarly, Reverend Henry Caswall, who visited Nauvoo in April 1842, had a chance to see some of the Egyptian papyri. Caswall, who was hostile to the Saints, described Facsimile 1 as having a "'man standing by him with a drawn knife.'"[7]

The critics, however, claim that evidence supports a belief that the scroll was already damaged prior to Joseph's involvement and that Joseph merely sketched in the parts missing in the lacuna. It's seems apparent, for example, that the lacuna descends several layers into the rolled scroll (the larger tear is at the first—or top—part, and the same outlined tear—only smaller—appears in the lower layers). Non-LDS Egyptologists do not think Joseph's "restoration" accurately reflects what was originally shown on the papyri, and in at least some instances, it seems that Joseph invented hieroglyphic characters to fill in for missing characters lost by the lacuna. This suggests that part of the scroll's tore/fell away when it was first unrolled and prior to Joseph's translation. For the sake of argument, let us grant the theory proposed by the critic—that the lacuna was present prior to Joseph making a translation and that Joseph (or some other early leader) "restored" the missing information.

Some considerations: there is at least some evidence that the LDS version has precedence in ancient Egyptian drawings. Some LDS researchers, for instance, have argued that the fingers/wing-tips look significantly more like fingers (according to Egyptian drawings) than hawk wing-tips. A number of scholars have noted that the Egyptians were very specific in how they drew wings and thumbs.[8]

Nobody knows who sketched the missing portions of Facsimile 1

Another consideration: We don't know that Joseph was the responsible party for sketching in the missing portions of Facsimile 1. It is possible that one of Joseph's contemporaries "restored" the missing parts, or it is possible that "J-red" or some other Jewish copyist "restored" the parts in order to more closely approximate the details conveyed by the Abrahamic text. It is certainly also possible that Joseph "restored" the missing parts either because they were in the original papyri—as edited by "J-red"—or because Joseph felt that such restorations more accurately reflected the Book of Abraham's intended use of the graphic as pertaining to the details discussed in the text.

Joseph's amendments to later editions of the Book of Mormon and the Doctrine & Covenants, and even the Joseph Smith Translation of the Bible, are all instructive when we compare the graphical alterations in Facsimile 1. In each case, Joseph Smith—by way of revelation, inspiration, or prophetic analysis—"restored" or amended scripture to more closely approximate the additional insights he had gleaned by divine revelation.

Regarding Facsimile 2, it should be noted that portions of the original Facsimile 2 appear to have been missing, and that the missing portions were filled in with characters or images taken from other sources before the image was published in the Times and Seasons. Some material was copied from the Joseph Smith papyri. Among the missing sections may have been the area identified as section #3, which matches a figure which appears on Joseph Smith Papyrus IV. One interesting thing about this restoration is that the figure in the boat actually does appear in this section of at least one other hypocephalus. 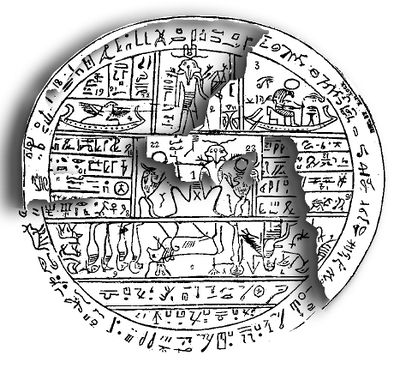 Missing sections of Facsimile 2 were filled in before publication. 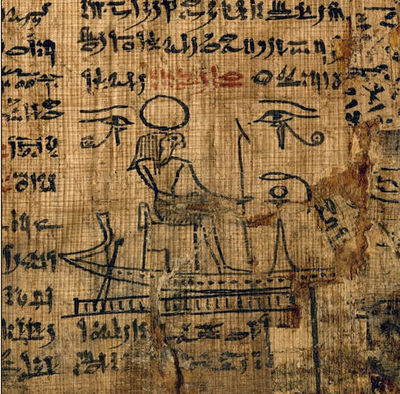 This figure on Joseph Smith Papyrus IV matches what was used to fill in a missing section of Facsimile 2.