< Criticism of Mormonism‎ | Online documents‎ | Letter to a CES Director

A FairMormon Analysis of "A Letter to a CES Director: Why I Lost My Testimony"

"Spreading the word" and media response to the CES Letter 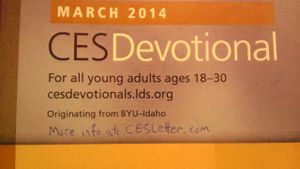 Vandalism of a CES flyer on a ward bulletin board by a "CES Letter" supporter. (click to enlarge)[1] 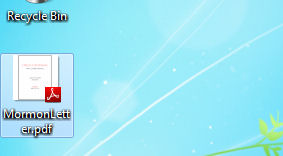 An ex-Mormon leaves the CES Letter on a public library computer: "Left a Present for Missionaries at Public Library. I've done my good for the day. Any one think they'll click to read 'Mormon Letter.pdf,' which is just the CES Letter? (smiles)" [2]

Ex-Mormon proponents of what is commonly referred to as the "CES Letter" use a variety of methods to "get the word out" to those whom they wish to deconvert. Fans of the letter scrawl its web address on flyers posted in Church buildings, and leave copies of the letter on public library computers. In April 2014, an anonymous sender and former student emailed the "Letter to a CES Director" to students at the LDS Business College in Salt Lake City. Peggy Fletcher Stack of the Salt Lake Tribune notes:

A spam email with an attachment that discusses concerns with Mormon teachings was sent Tuesday to LDS Business College students. The email was addressed to hundreds enrolled at the church-owned college in downtown Salt Lake City, according to one student who received it. The email — which was not from a school account — listed the sender as LDSBC Important.

The email says, "Dear students, Please read the attached file. It contains important information pertaining to the Church of Jesus Christ of Latter-day Saints. If you have any questions, please feel [sic] to respond. Thank You!"

The attachment is "Letter to a CES Director, Why I Lost My Testimony," by Jeremy Runnells, a sixth-generation Mormon and returned missionary who wrote the piece after experiencing a crisis of faith. The document was published online in April 2013 and updated in February.

Meanwhile, the originator of the email bragged of his accomplishment on the ex-Mormon subreddit:

Hey guys! So I received an email from LDSBC that went out to students (I am a former student) and they forgot to Bcc the recipients. I decided to take advantage of the opportunity to email the CES letter to all the recipients. I wrote a simple email, titles [sic] "Truth Never Lost Grounds to Inquiry" and simply asked in the email for them to read the attached document which had important information pertaining to the LDS church. I didn't send a rant, I didn't attack their beliefs... I just said read it. And then I said respond with questions. Well, we will see where this goes!

(Comment posted to ex-Mormon subreddit in thread "I just emailed 1,000+ LDSBC students the CES letter!" by "livelife2thefullest" on April 30, 2014) 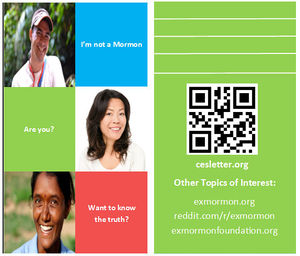 Fake pass-along cards produced by "wynnhall96". Originals located at Front Back. Consistent with our policy of not providing active links to anti-Mormon sites, the QR Code in this image has been altered.

Proponents of the letter have considered other methods of fooling Latter-day Saints into reading it. In August, an ex-Mormon proposed creating an Android app for the CES Letter as a tool in the ex-Mormon "missionary program":

The android store occasionally recommends lds apps to me because I have things like the ward directory app and the scriptures app in my history.

It occurs to me that mobile app versions of mormonthink and the ces letter would be great for our little exmo missionary program. Google's common interests algorithm would inevitably advertise the apps to TBMs [True Believing Mormons][3]

The poster went on the explain that this would be a good way of persuading Latter-day Saints to view the letter, noting that "90% of the point of this in my mind would be to get impulse downloads. People don't search google for "ces letter", download the pdf file, go to their pdf app, then browse through their folders to find where its saved on impulse. But they download free apps that "you might also like" on impulse."[3] One ex-Mormon proposed "Meet the Mormons" as the title for the proposed CES Letter app,

I've been contemplating creating an app or apps not just for Mormonism but for some of the other major religions too. Either way, "Meet the Mormons" should be the title of the suggested ces app.[4]

Another ex-Mormon posting under the name "wynnhall96" created his own "pass-along" cards. He posted the following (rather naive) proposal on an ex-Mormon message board:

"I'm currently a college student and I see the local elders out and about trying to convert people and bring them to church. So after passing them by on the way home, I had an epiphany. I should dress up like a Mormon missionary and go around de-converting people they talk to or just spread the truth about the LDS church to people who otherwise might believe it. I have all the required attire (including an old nametag I received as a childhood gift with my name). I was thinking about putting ex-member somewhere on it and then taking a few hours each day and just talk to people and inform them of reality. I also had to idea to take Mormon.org cards and instead linking them to exmormon.org."[5]

The most ironic response to this proposal came from poster "non-utard," who excitedly exclaimed: "They cant wrap their heads around it? Give them a copy of CESletter.com and tell them you were taught not to be a LIAR." [6]

Indeed, it seems that the ultimate irony is that the ex-Mormon concept of being "taught not to be a LIAR" includes masquerading as a fake LDS missionary, faking up an old nametag and passing out fake pass-along cards. The key word here, of course, is "fake."

Even vandalizing Church buildings seems to be an acceptable method of "spreading the word". One ex-Mormon bragged of his work on an ex-Mormon message board:

I've done this countless times. Once wrote "Cesletter.com" in permanent red marker on the outside white door frame of a church building.[7]