Critics attempt to use this to show inconsistency in Joseph's accounts of the First Vision. For example, a critical graphic indicates that the 1835 "Erastus Holmes" account describes a different vision. The graphic implies that he didn't mention every other element of the vision, and that this makes it inconsistent. However, Joseph was simply offering a one-line summary of the event that he had described only five days earlier in his journal. 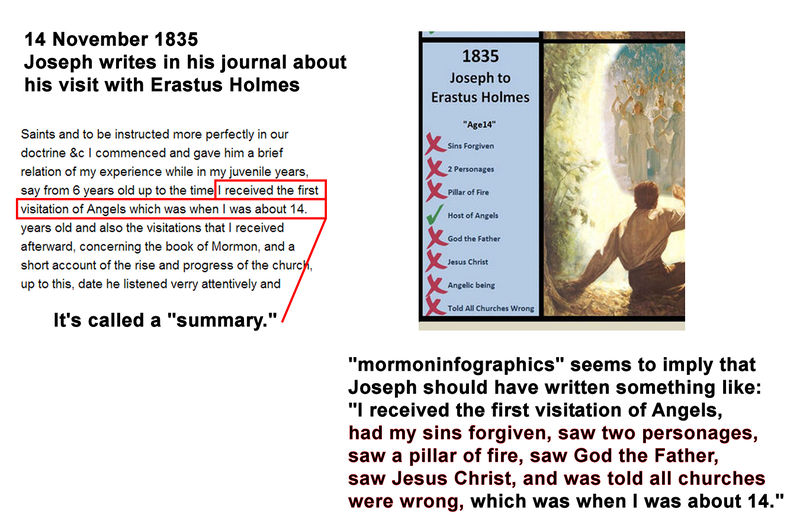 Joseph Smith (9 Nov. 1835): "a personage appeard in the midst of this pillar of flame...another personage soon appeard like unto the first...and I saw many angels in this vision"

I kneeled again my mouth was opened and my toung liberated, and I called on the Lord in mighty prayer, a pillar of fire appeared above my head, it presently rested down upon me , and filled me with Joy unspeakable, a personage appeard in the midst of this pillar of flame which was spread all around, and yet nothing consumed, another personage soon appeard like unto the first, he said unto me thy sins are forgiven thee, he testified unto me that Jesus Christ is the Son of God; and I saw many angels in this vision I was about 14 years old when I received this first communication; [1]

I commenced and gave him a brief relation of my experience while in my juvenile years, say from 6 years old up to the time I received the first visitation of Angels which was when I was about 14. years old and also the visitations that I received afterward, concerning the book of Mormon [2]