Question: Is the rate of antidepressant use in Utah much higher among Mormons than the general population?

(Redirected from LDS use of antidepressants)

Question: Is the rate of antidepressant use in Utah much higher among Mormons than the general population?

While Utah does have the highest rate of antidepressant use in the United States, there is no evidence that this is because of stress from the LDS lifestyle and culture

It is claimed by some that the rate of antidepressant use is much higher among Mormons than the general population and that this is evidence that participation in the LDS Church is inordinately stressful due to pressure for Mormons to appear "perfect."

While Utah does have the highest rate of antidepressant use in the United States, there is no evidence that this is because of stress from the LDS lifestyle and culture. Credible research has shown that LDS women are actually more likely to identify themselves as "happy" than non-Mormon women. Religion generally (and the LDS religion specifically) has been repeatedly shown to be either beneficial or neutral for mental health and well-being.

Without further research, critics of the Church have no convincing evidence that higher anti-depressant use in Utah is caused by problems or difficulties associated with being a believing, practicing Latter-day Saint.

See also: Suicide rate among Mormons and Women taught to be subservient to men?

Prescription drug use by state or region has been difficult to assess. In 2002 Express Scripts, one of the largest mail-order pharmaceutical providers in the United States, released their Prescription Drug Atlas, which shows prescription drug orders from their individual clients by state. A Los Angeles Times article on the study concluded that

What the study did not indicate is the reason antidepressant use was higher in Utah than in other states. Critics of the Church were quick to correlate this data with the high rate of LDS Church membership in Utah, thus blaming the Church and Mormon culture for the problem. Kent Ponder Ph.D, a Latter-day Saint, produced an article in which he correlates the use of antidepressants specifically with pressures placed on Mormon women. Ponder concludes:

This problem is clearly, closely and definitely linked to The Church of Jesus Christ of Latter-Day Saints. Approximately 70% of Utahans are Mormons. Jim Jorgenson, director of pharmacy services for the University of Utah, confirmed that Utah has the highest percentage of anti-depressant use, hypothesizing that large families, larger in Utah than in other states, produce greater stress. (Large Utah families are primarily Mormon families).

The same LDS Church that works so well for many works very badly for many others, who become chronically depressed, especially women. [2]

Yet the study released by Express Scripts makes no claims as to why some states use more prescription drugs of one type or another. Far from being "clearly, closely and definitely" the fault of the LDS Church, Ponder has no evidence whatsoever; he is giving his belief and casting it as a proven fact.

The Express Scripts study includes a number of factors that Ponder overlooked in his paper that are helpful in assessing the situation:

There are other possible factors outside the scope of the Express Scripts study that may also play a part here:

Are Mormons more depressed than non-Mormons?

The critics' attitude toward members of the Church is nothing new. The same approach was taken by 19th-century critics:

In 1858 a writer from Harper's Weekly traveled to Utah and made the observation that the Latter-day Saint lifestyle turned LDS women into "haggard, weary, slatternly women, with lackluster eyes and wan, shapeless faces, hanging listlessly over their gates, or sitting idly in the sunlight, perhaps nursing their yelling babies—all such women looking alike depressed, degraded, miserable, hopeless, soulless" (G. L. Bunker and D. Binton, as cited in Judd 1987, p. 150). In 1860, Dr. Robert Bartholomew, the assistant surgeon of the United States Army, visited Utah and described LDS men as having "an expression of compounded sensuality, cunning suspicion, and a smirking self-conceit." While many anecdotal descriptions (such as the ones above), essays (see Burgoyne and Burgoyne 1978), and media specials have discussed the detrimental effects of the LDS lifestyle on mental health (especially that of LDS women), few have any grounding in research evidence. None of the studies included in this analysis that included depression as one of its variables indicated support for an unhealthy relationship between Mormonism and depression. [4]

Shortly after Mr. Ponder released his paper, Brigham Young University sociologist Sherrie Mills Johnson used data from national surveys to show that Mormon women are less likely to be depressed than American women in general. Johnson's conclusions upheld findings of some earlier studies that Mormons have no more depression than the nation's population as a whole. [5]

Analysis of the data indicates that Latter-day Saints who live their lives consistent with their religious beliefs experience greater general well-being and marital and family stability, and less delinquency, depression, anxiety, and substance abuse than those who do not. This review of research also concludes that there is very little support for the assertion made by some that religious belief, practice, or affiliation is antithetical to mental health.... [6]

That is, an active inner spiritual life is more protective than merely outward forms of religious observance.

For studies involving members of the Church of Jesus Christ specifically:

It is easy to find a correlation between two things:

However, correlations do not necessarily imply causation:

Correlations are easy to come by. They may suggest causes for further study, but they mean little by themselves. They prove nothing.

Critics like to point to a correlation between a high LDS population and a high anti-depressant use, and then assume that this is causative. But, they either do not know—or do not want us to know—that the causation which the correlation suggests has been tested, and has not supported the conclusion they wish to draw.

Critics who use this approach are therefore often guilty of at least one logical fallacy:

Other evidence about levels of happiness in Utah 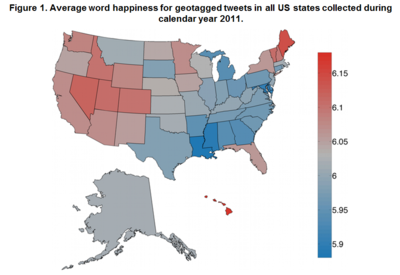 If we are going to use Utah as a surrogate measure for Mormons (something which may not be proper), we should also consider evidence on the other side of the coin.

A 2013 paper found that, based upon Twitter metrics, Utah is in the top five most happy states: