Question: What did Orson Hyde, the husband of Marinda Nancy Johnson, know about her sealing to Joseph Smith for eternity?

Question: What did Orson Hyde, the husband of Marinda Nancy Johnson, know about her sealing to Joseph Smith for eternity?

Marinda Nancy Johnson was married to Orson Hyde. There are contradictory accounts which make it impossible to know for certain whether or not Orson knew of and consented to Marinda's sealing for eternity to Joseph. However, according to Hales, "If the 1842 date for the sealing between Joseph and Marinda marriage is correct, then Joseph may have been sealed to Marinda in an “eternity only” sealing without Orson Hyde’s knowledge." Yet he also notes that "John D. Lee remembered that Orson gave his permission: 'Hyde’s wife, with his consent, was sealed to Joseph for an eternal state.'" [1]

There are two sealing dates for Joseph to Marinda - one during a period of one to two years after Hyde left on his mission, and one after he had already returned

The popular story among critics is that Joseph sent Orson away on his mission so that he could quickly marry his wife Marinda. However, the first sealing date shows that Joseph was sealed to Marinda for eternity one to two years after Hyde had left on his mission, so there was nothing "quick" about it. Furthermore, the evidence indicates that this was an "eternity only" sealing typical of Joseph's other "polyandrous" marriages involving other men's wives. No children are known to have conceived during this time. However, upon Hyde's return, not only did he father children by Marinda, but he also quickly asked Joseph to seal him in a new polygamous marriage of his own.

Todd Compton: “It is striking that Marinda had no children while Orson was on his mission to Jerusalem, then became pregnant soon after Orson returned home”

Brian Hales notes the following regarding the timeline,

The timeline shows that Apostle Orson Hyde, Marinda’s legal husband, served a mission to Palestine from the spring of 1840 to December 7, 1842. Weeks after his return, Marinda became pregnant with Orson Washington Hyde (conception approximately February 16, 1843) who was born on November 9, 1843. Several authors alleged Joseph Smith practiced sexual polyandry with some of his plural wives including Marinda, despite a mountain of contradictory evidences [3] However, no evidence has been found to connect Joseph Smith with this child. Todd Compton observes: “It is striking that Marinda had no children while Orson was on his mission to Jerusalem, then became pregnant soon after Orson returned home.” [4] They also allege that a second son, Frank Henry Hyde, was father by Joseph Smith under the assumption that he was born January 23, 1845 (conception approximately May 2, 1844). [5] However, his birth certificate and an obituary in the The Ogden Standard, June 29, 1908, “Frank H. Hyde Dies Suddenly,” both corroborate a January 23, 1846, birthdate (May 2, 1845, approximate conception). [6][7] 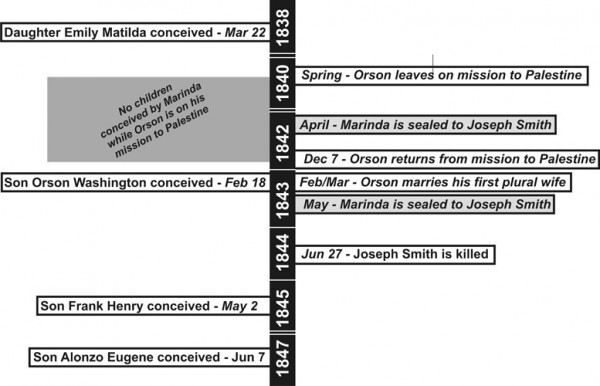 If the 1842 date for the sealing between Joseph and Marinda marriage is correct, then Joseph may have been sealed to Marinda in an “eternity only” sealing without Orson Hyde’s knowledge. While such a sealing would not have affected her civil union with Orson, a late second-hand report from exposé author Ann Eliza Webb Young states:

When Joseph Smith first taught polygamy, and gave the wives as well as the husbands opportunity to make new choice of life-partners, Mrs. Hyde, at that time a young and quite prepossessing woman, became one of the Prophet’s numerous fancies. . . . Hyde was away on a mission at the time, and when he returned, he, in turn, imbibed the teachings of polygamy also, and prepared to extend his kingdom indefinitely. In the mean time it was hinted to him that Smith had had his first wife sealed to himself in his absence, as a wife for eternity. Inconsistent as it may seem, Hyde was in a furious passion.” [8]

However, John D. Lee remembered that Orson gave his permission: “Hyde’s wife, with his consent, was sealed to Joseph for an eternal state.” [9] [7]

Whatever the sequence, Orson appealed to Joseph to perform his own plural marriage weeks after returning from his mission stating in 1869: “In the month of February or March, 1843, I was married to Miss Martha R. Browitt, by Joseph Smith, the martyred prophet, and by him she was sealed to me for time and all eternity in Nauvoo, Illinois.” [10]

The details of the relationship between Marinda and the Prophet will probably never be known. If Marinda had chosen Joseph as her eternal husband, she apparently changed her mind because she chose to be sealed to her legal husband Orson Hyde in the Nauvoo temple on January 11, 1846.

However, Marinda Nancy Johnson relocated to Salt Lake City in 1852 and later divorced Orson Hyde. She died in 1886, having kept the faith in the Church established by her eternal husband.[7]

The accounts of the sealing of Marinda to Joseph

Much of what we know about the Hyde sealing is also contaminated by hostile, mutually contradictory accounts that contain some known false information.

A biography of Marinda Nancy Johnson may be viewed on Brian and Laura Hales' website "josephsmithspolygamy.org". off-site