Question: What is the current state of the evidence for proving or disproving that Joseph Smith had children by his plural wives?

Note: This material is part of a collection of draft essays on LDS plural marriage. They are provided for the use of FairMormon and its readers. (C) 2007-2017 Gregory L. Smith. No other reproduction is authorized.

Question: What is the current state of the evidence for proving or disproving that Joseph Smith had children by his plural wives?

As always, we are left where we began—with more suspicions and possibilities than certitudes

Few authors agree on which children should even be considered as Joseph's potential children. Candidates which some find overwhelmingly likely are dismissed—or even left unmentioned—by others. Recent scholars have included between one to four potential children as options. Of these, Josephine Lyon was the most persuasive, until her relationship to Joseph Smith was ultimately disproven through DNA testing. Orson W. Hyde died in infancy, and so can never be definitively excluded as a possible child, though the dates of conception argue against Joseph's paternity. Oliver Gray Frost is mentioned in two sources as having a child by Joseph. Both she and the child died in Nauvoo, so no genetic evidence will ever be forthcoming.[1] 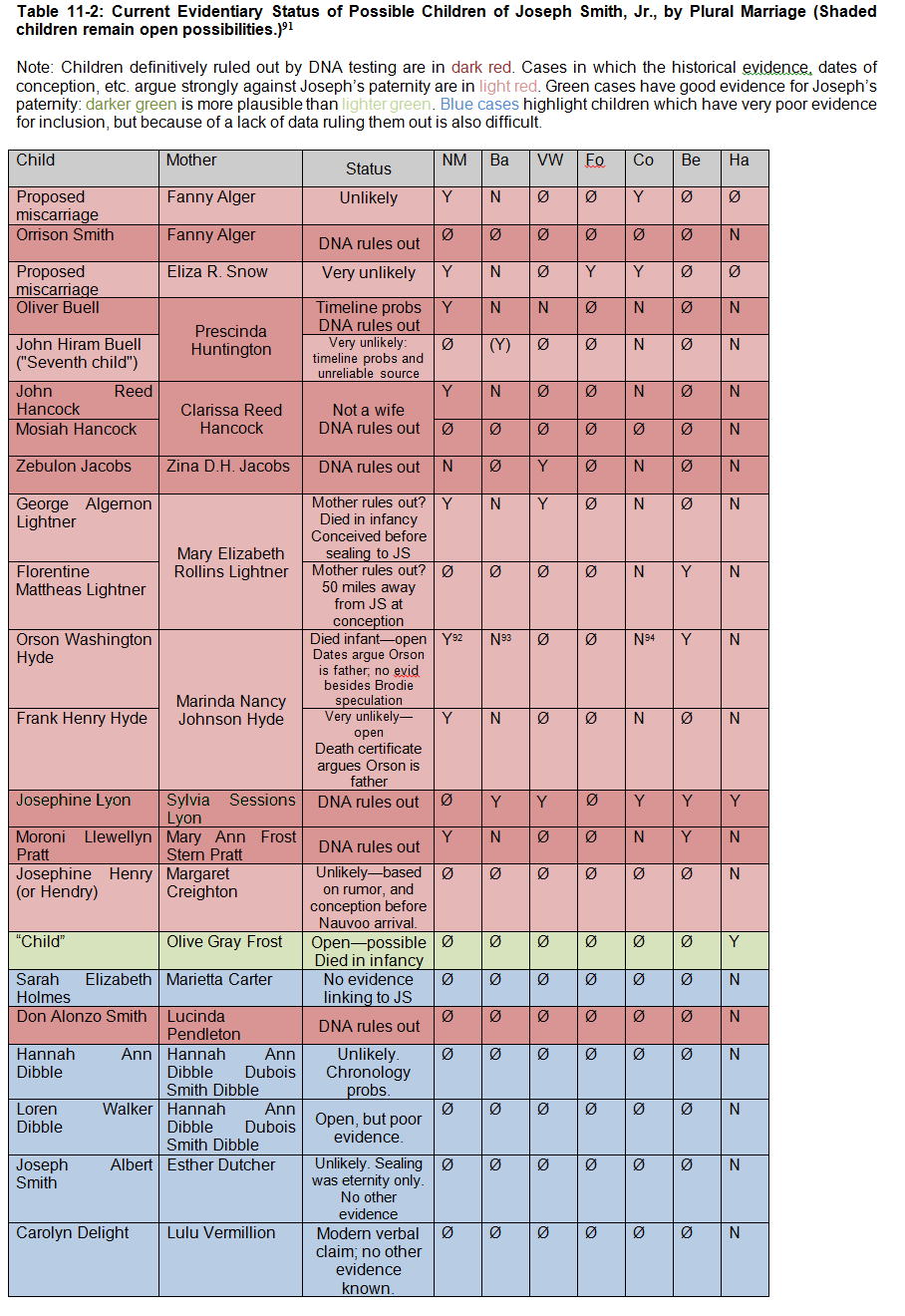 Endnote links for above table

As always, we are left where we began—with more suspicions and possibilities than certitudes. One's attitude toward Joseph and the Saints will influence, more than anything else, how these conflicting data are interpreted.

The uncertainty surrounding Joseph's offspring is even more astonishing when we appreciate how much such a child would have been valued. The Utah Church of the 19th century was anxious to prove that Joseph had practiced full plural marriage, and that their plural families merely continued what he started. Any child of Joseph's would have been treasured, and the family honoured. There was a firm expectation that even Joseph's sons by Emma would have an exalted place in the LDS hierarchy if they were to repent and return to the Church.[6] As Alma Allred noted, "Susa Young Gates indicated that [Brigham Young] wasn’t aware of such a child when she wrote that her father and the other apostles were especially grieved that Joseph did not have any issue in the Church."[7]

In 1884, George Q. Cannon bemoaned this lack of Joseph's posterity:

There may be faithful men who will have unfaithful sons, who may not be as faithful as they might be; but faithful posterity will come, just as I believe it will be the case with the Prophet Joseph's seed. To-day he has not a soul descended from him personally, in this Church. There is not a man bearing the Holy Priesthood, to stand before our God in the Church that Joseph was the means in the hands of God, of founding—not a man to-day of his own blood,—that is, by descent,—to stand before the Lord, and represent him among these Latter-day Saints.[8]

Brigham and Cannon, a member of the First Presidency, would have known of Joseph's offspring if any of the LDS leadership did. Yet, despite the religious and public relations value which such a child would have provided, they knew of none. It is possible that Joseph had children by his plural wives, but by no means certain. The data are surprisingly ephemeral.