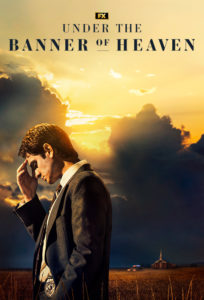 Today a new television series has been released titled Under the Banner of Heaven. It is based on a best-selling book by that same name, published in 2003, written by Jon Krakauer.

The book, and now the television series, talks about the 1984 horrific murders of Brenda Lafferty, and her 15-month-old daughter Erica, by Dan and Ron Lafferty in American Fork Utah. The theme of Jon Krakauer’s book is that Dan and Ron’s religious upbringing in The Church of Jesus Christ of Latter-day Saints is the underlying cause for what they did. Krakauer, an atheist, believes that since bad things are sometimes done in the name of religion, religion breeds violence.

This series will likely lead to questions from your friends and family members. We’ve created a page of resources. Here are a few things to be aware of:

The series depicts temple ceremonies. You will see our sacred ceremonies on television and out of context. People are dressed in their temple clothing. Remember, there are a few things you covenant not to discuss about temples. But you are allowed to talk about other things so long as you remember to keep them sacred.  You may want to remind your friends that there are several temple open houses going on right now, and there is information on the Church Website that includes explanations, videos, and pictures.

Ron and Dan Lafferty were both excommunicated in 1982 or 1983. There are conflicting reports on the date, which we are still trying to run down. The Guide to the Scriptures defines Excommunication:

Excommunication is the most severe Church disciplinary action. A person who is excommunicated is no longer a member of the Church. Church authorities excommunicate a person from the Church only when he has chosen to live in opposition to the Lord’s commandments and thus has disqualified himself for further membership in the Church. See also Apostasy; Rebellion

Ron and Dan Lafferty were not members of the Church of Jesus Christ of Latter-day Saints when they committed the 1984 murders. In fact, they were actively campaigning against the Church at that time. The Church excommunicated them because they were choosing to live in opposition to the teachings of the Church, so it is illogical to blame their subsequent evil actions on the Church.

The Lafferty brothers believed they were prophets. Ron believed he had a revelation saying that his 14-year-old step daughter should be an additional wife. Later, Ron claimed he received a revelation commanding him to kill Brenda and her daughter.

Again, this is against the teachings of the Church in many ways. I don’t even have to mention why murder is wrong. But the idea of having revelation that goes against what the current prophet and the quorum of the twelve teaches is against our beliefs and our scriptures. D&C 28:2-5 and 43:2-7 are clear about this. You can read more about that here.

Part of the theme of this series is that members discover truths about the Church that have been kept hidden from them. This totally goes against the reality of the massive Joseph Smith Papers Project, which strives to publish every single document related to Joseph Smith on the Internet and the new Saints histories which are being published in multiple languages.

One event used as evidence that “Mormons” are inherently violent is the Mountain Meadows massacre.  The Church did a massive research project examining and publishing everything they could find about that.  They published a book, and several articles in Church magazines. They even wrote Gospel Topics Essays on this here:

FAIR also has resources on the Mountain Meadows Massacre:

And we have more.

The Church of Jesus Christ of Latter-day Saints abhors violence. The book – and now the mini-series – has had to cherry-pick events going back to the 1800s to find events that support their theme of Church teachings causing violence. Is it true that there have been members of the Church who have done terrible things? Yes, certainly that is true. Does that have anything to do with a 1984 murder committed by a deluded sociopath? No.

Remember, this is Hollywood. This is an entertainment miniseries that is loosely based on the facts. It is not a documentary. Don’t get too upset by the Hollywood depiction. We know it will be wrong. Remember, Dan Brown’s The Da Vinci Code (which was published the same year as Under the Banner of Heaven) savaged the Catholic Church. One Amazon reviewer put it this way, “Dan Brown himself has said the Da Vinci Code books are works of fiction FFFFIIIIICCCCTTTIIIIOOOONNNN.”

But the Under the Banner of Heaven series is based on a historical event. Many will be confused by what is history and what is not. It becomes especially confusing when the theme is an attack on our beliefs and all religious beliefs in general. Our friends, and our youth, who are not as familiar with our teachings may become confused.

But what about the tie between religion and violence? Isn’t that true? While it is true that some religious people commit violence, studies have shown that frequent church attendance correlates with reduced crime. See some data on this here:

Religious people are not the only ones involved in violence. There have also been atrocities perpetrated by atheists. Some notable examples are Adolf Hitler, whose regime killed more than 6 million Jews and 3 million prisoners of war;  Mao Zedung, who killed 65 million people; Pol Pot who caused the death of over a million people; and Stalin who killed between 20 and 40 million people.

This does not mean that religious people are blameless. Certainly, religious extremists have contributed to violence. But as a general principle, the idea that religion is the dominant force that leads people to commit violence is not well supported. The idea that The Church of Jesus Christ of Latter-day Saints is a violent religion or that the teachings of the Church somehow lead people to violence is even less supported.

To help you in talking with your friends and family who have questions, FAIR has put together an information page.  We will keep the page updated as the series progresses. You can find that page here.

Subscribe to our newsletter to receive updates and other pertinent information.

If you or your family and friends have any questions, you can ask them here.

While we navigate this together, it may help to keep in mind an observation historian Keith Erekson made:

Historical facts do not “speak for themselves.” There are many facts in history, but because the past is gone, the surviving facts need to be explained in context to understand them. As a result there is no history without interpretation. All facts must be interpreted…Facts don’t speak, but storytellers do; therefore, it is essential to understand how interpretation happens, why storytellers speak the way they do, and how their stories work. (Erekson, Keith A. Real vs. Rumor, Deseret Book, p51)

There’s storytelling at work with Under the Banner of Heaven. Let’s be aware of the interpretation, motivations and agenda of the storytellers and be ready to share correct information with our families and friends.

Best wishes to you,