Benajah Williams (1820): "Had a two Days meeting at Sq Bakers in Richmond. Br. Wright being gone to campmeeting on Ridgeway circuit I expected to find Br. J. Hayes at the Meeting"

In July 1820, a minister named Benajah Williams wrote the following of a camp meeting at a site only twenty-eight miles from Palmyra:

“Sat. 15th10 Had a two Days meeting at Sq Bakers in Richmond. Br. Wright being gone to campmeeting on Ridgeway circuit I expected to find Br. J. Hayes at the Meeting & calculated to get him to take the lead of the meeting but when on my way to meeting met him going to conference & tried to get him to return but he thout[sic] not best as his horse was young, he said he could not ride through by conference by the time it commenced Then I thout what shall I do I shall have to take the lead at the meeting & do the p- (preaching) but the Lord prepaired him self a preacher it rained powerfully until 11 o’clock so that I was verry wet I called with some of the Brtheren at Br. Eldredges11 and took dinner then rode to the place appointed for meeting. & found Br. Lane a Presiding Elder from Susquehanna District with five more preachers. Br. Warner p. on Sat. Br. Griffing exhorted. We had a good prayer meeting at six in the evening.”

“Sab. 16th Our Lovefeast began at 9 & the Lord was present to bless & we had a shout in the camp. Br E Bibbins p- at 11 from…the lord attended the word & the people were satisfied with the Sermons. Br. Lane exhorted and spoke on Gods method in bringing about Reffermations [sic] his word was with as from the authority of God. & not as the Areons. After him Br. Griffin with life & energy & Br. Vose closed the Meeting after with some of the Brethren dined with Br. W. E….” [1] 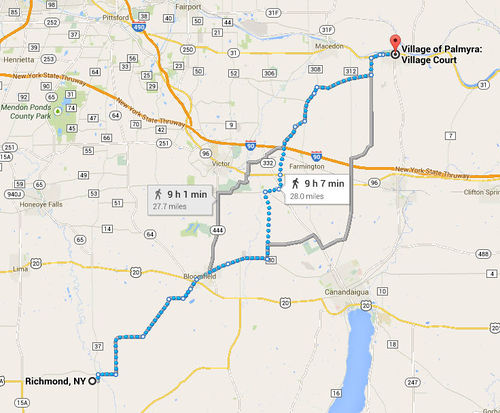 Palmyra Register (1820): "It was far from our intention to charge the Methodists with retailing ardent spirits while professedly met for the worship of their God"

28 June 1820: "The deceased, we are informed, arrived...from a camp-meeting which was held in this vicinity, in a state of intoxication"

Effects of Drunkenness--DIED at the house of Mr. Robert McCollum, in this town, on the 26th inst. James Couser, aged about forty years. The deceased, we are informed, arrived at Mr. McCollum's house the evening preceding, from a camp-meeting which was held in this vicinity, in a state of intoxication. He, with his companion who was also in the same debasing condition, called for supper, which was granted. They both stayed the night--called for breakfast next morning--when notified that it was ready, the deceased was found wrestling with his companion, who he flung with the greatest ease,--he suddenly sunk down upon a bench,--was taken with an epileptic fit, and immediately expired.--It is supposed he obtained his liquor, which was no doubt the cause of his death, at the Camp-ground, where, it is a notorious fact, the intemperate, the lewd and dissolute part of community too frequently resort for no better object, than to gratify their base propensities.

The deceased, who was an Irishman, we understand has left a family, living at Catskill this state. [2]

Mention of "the Camp-ground" did not endear the paper to the local Methodists, who objected to the implication that this (the location of their worship services) was the site of drinking to excess and a place of gathering by the "dissolute part" of the community. An article appeared in the same paper a week later which said:

5 July 1820: "Methodists...we did not mean to insinuate, that he obtained it within the enclosure of their place of worship"

"Plain Truth" is received. By this communication, as well as by the remarks of some of our neighbors who belong to the Society of Methodists, we perceive that our remarks accompanying the notice of the unhappy death of James Couser, contained in our last, have not been correctly understood. "Plain truth" says, we committed "an error in point of fact," in saying that Couser "obtained his liquor at the camp-ground." By this expression we did not mean to insinuate, that he obtained it within the enclosure of their place of worship, or that he procured it of them, but at the grog-shops that were established at, or near if you please, their camp-ground. It was far from our intention to charge the Methodists with retailing ardent spirits while professedly met for the worship of their God. Neither did we intend to implicate them by saying that "the intemperate, the dissolute, &c. resort to their meetings."--And if so we have been understood by any one of that society, we assure them they have altogether mistaken our meaning. [3] 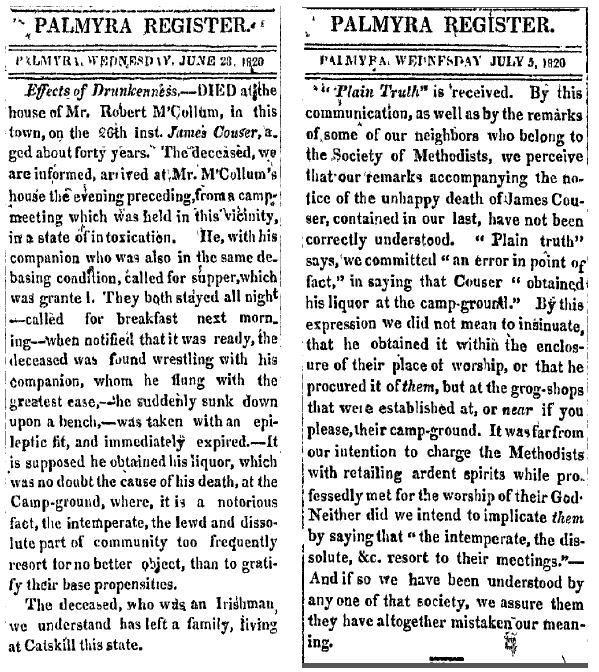 Video: Revivals in the Palmyra area in 1820

This category currently contains no pages or media.