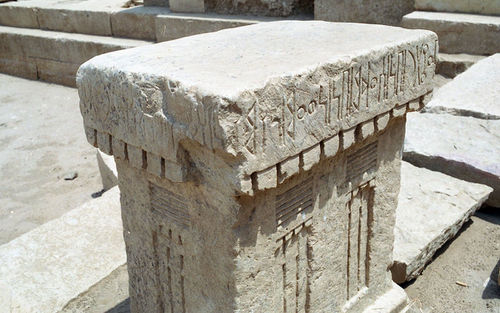 The entire thrust of these remarks underscores the observation that Joseph Smith could have known almost nothing about ancient Arabia when he began translating the Book of Mormon. Yet the narrative of the journey of the party of Lehi and Sariah through ancient Arabia, written by their son Nephi, fits with what we know about the Arabian Peninsula literally from one end to the other, for their journey began in the northwest and ended in the southeast sector. Nephi's narrative faithfully reflects the intertwining of long stretches of barren wilderness with pockets of verdant, lifesaving vegetation. Recent discoveries have illumined segments of the account, tying events to known regions (e.g.,) and climatic characteristics (e.g., mists along the coastal mountains). People in Joseph Smith's world may have possessed accurate information about one or two aspects of Arabia through classical sources (e.g., incense trade, honey production). But those same sources offered inaccurate caricatures of Arabia that Nephi's narrative does not mirror (e.g., that the peninsula was graced by large forests, etc.). Hence, on both fronts—modern discoveries and more accurate information—the Book of Mormon account shines as a radiant beam across the centuries, inviting us to adopt its more important message of spiritual truths as our own.[1]

Three altar inscriptions containing NHM exist in the correct Old World location, and a non-LDS archaeologist has dated one of them to the seventh to sixth centuries BC.

Surprisingly, evidence for Nahom, the name of the place where Ishmael was buried (1 Nephi 16:34), is based on historical, geographic, and archaeological—and only secondarily on etymological—considerations.
Three altar inscriptions containing NHM as a tribal name and dating from the seventh to sixth centuries BC—roughly the time period when Lehi’s family was traveling though the area—have been discussed by S. Kent Brown.[3] Dan Vogel, writing in the misleadingly named Joseph Smith: The Making of a Prophet and responding to two books by LDS authors about Lehi’s journey in the Arabian desert, has objected to the dating of the Arabian word NHM: “There is no evidence dating the Arabian NHM before A.D. 600, let alone 600 B.C.” [4] It should be noted, however, that Burkhard Vogt, perhaps unaware of its implications for the Book of Mormon, dates an altar having the initial letters NHM(yn) to the seventh to sixth centuries BC. [5] This is not insignificant since Vogel’s book was published in 2004, while Vogt’s contribution was published in 1997.

Nhm appears as a place name and as a tribal name in southwestern Arabia in the pre-Islamic and early Islamic period in the Arab antiquarian al-Hamdani’s al-Iklīl [6] and in his Ṣifat Jazīrat al-’Arab. [7] If, as Robert Wilson observes, there is minimal movement among the tribes over time, [8] the region known in early modern maps of the Arabian Peninsula as “Nehem” and “Nehhm” as well as “Nahom” may well have had that, or a similar, name in antiquity.

The case for Nahom, or NHM, in this area is made even more tight by recent study. It has become clearly apparent from Nephi's note—"we did travel nearly eastward" from Nahom (1 Nephi 17:1)—that he and his party not only had stayed in the NHM tribal area, burying Ishmael there, but also were following or shadowing the incense trail, a trading road that by then offered an infrastructure of wells and fodder to travelers and their animals. From the general region of the NHM tribe, all roads turned east. How so? Across the Ramlat Sabcatayn desert, east of this tribal region and east of Marib, lay the city of Shabwah, now in ruins. By ancient Arabian law, it was to this city that all incense harvested in the highlands of southern Arabia was carried for inventorying, weighing, and taxing. In addition, traders made gifts of incense to the temples at Shabwah.[9] After this process, traders loaded the incense and other goods onto camels and shipped them toward the Mediterranean and Mesopotamian areas, traveling at first westward and then, after reaching the edges of the region of the NHM tribe, turning northward (these directions are exactly opposite from those that Nephi and his party followed). Even the daunting shortcuts across the Ramlat Sabcatayn desert, which left travelers without water for 150 miles, ran generally east-west. What is important for our purposes is the fact that the "eastward" turn of Nephi's narrative does not show up in any known ancient source, including Pliny the Elder's famous description of the incense-growing lands of Arabia. In a word, no one knew of this eastward turn in the incense trail except persons who had traveled it or who lived in that territory. This kind of detail in the Book of Mormon narrative, combined with the reference to Nahom, is information that was unavailable in Joseph Smith's day and thus stands as compelling evidence of the antiquity of the text.[10]

The root for "naham" means "to mourn"

Nephi's party reaches an area "which was called Nahom" (1 Nephi 16:34)near the time that they make an eastward turn in their journey. [11]

It [the root for naham] appears twenty-five times in the narrative books of the Bible, and in every case it is associated with death. In family settings, it is applied in instances involving the death of an immediate family member (parent, sibling, or child); in national settings, it has to do with the survival or impending extermination of an entire people. At heart, naham means "to mourn," to come to terms with a death; these usages are usually translated...by the verb "to comfort," as when Jacob's children try to comfort their father after the reported death of Joseph. [12]

It is intriguing that Nephi tells us that the deceased Ishmael was buried at a spot with a name associated with mourning and death of loved ones.

It was the daughters of Ishmael who mourned for him and chided Lehi for his death (1 Nephi 16:34-35). Budde has shown that the Old Hebrew mourning customs were those of the desert, in which "the young women of the nomad tribes mourn at the grave, around which they dance singing lightly." The Arabs who farm also put the body in a tent around which the women move as they mourn. "At the moment of a man's death, his wives, daughters, and female relations unite in cries of lamentation (weloulouá), which they repeat several times." 65 It is common in all the eastern deserts for the women to sit in a circle in a crouching position while the woman nearest related to the dead sits silently in the middle—in Syria the corpse itself is in the middle; while singing, the women move in a circle and whenever the song stops there is a general wailing. The singing is in unison, Indian fashion. In some parts the men also participate in the rites, but where this is so the women may never mix with the men. They have a monopoly and a mourning tradition all of their own.66 Mourning begins immediately upon death and continues among the Syrian Bedouins for seven days, a few hours a day. "All mourning is by mourning women and female relatives. No men are present."67 As is well known, no traditions are more unchanging through the centuries than funerary customs.68[13]

This category has the following 3 subcategories, out of 3 total.

The following 14 pages are in this category, out of 14 total.