Book of Mormon statements about the practice of polygamy

Question: Does the Book of Mormon condemn polygamy?

"For if I will, saith the Lord of Hosts, raise up seed unto me, I will command my people; otherwise they shall hearken unto these things"

24 Behold, David and Solomon truly had many wives and concubines, which thing was abominable before me, saith the Lord.

25 Wherefore, thus saith the Lord, I have led this people forth out of the land of Jerusalem, by the power of mine arm, that I might raise up unto me a righteous branch from the fruit of the loins of Joseph.

26 Wherefore, I the Lord God will not suffer that this people shall do like unto them of old.

27 Wherefore, my brethren, hear me, and hearken to the word of the Lord: For there shall not any man among you have save it be one wife; and concubines he shall have none;

28 For I, the Lord God, delight in the chastity of women. And whoredoms are an abomination before me; thus saith the Lord of Hosts.

29 Wherefore, this people shall keep my commandments, saith the Lord of Hosts, or cursed be the land for their sakes.

Critics of the Book of Mormon generally refrain from citing the very next verse:

30 For if I will, saith the Lord of Hosts, raise up seed unto me, I will command my people; otherwise they shall hearken unto these things. (Jacob 2:30).

The Book of Mormon makes it clear that the Lord may, under some circumstances, command the practice of plural marriage. As one member of the Church explained:

Jacob 2:30 is the key verse for understanding why Mormons believe that Joseph Smith, Brigham Young, and other nineteenth-century Mormons were justified in their practice of polygamy, but that this is the exception to the Lord's law, not the rule.... Mormons believe that the period when polygamy was publicly sanctioned (1852–1890)—and the longer period in which it was privately approved (the early 1830s to 1904)—were exceptions to God's basic law that Jacob spelled out in verse 27.[1]

Question: Did early Church leaders state that the Book of Mormon condemns polygamy?

In addition to ignoring Jacob 2:30, critics attempt to use the words of early LDS leaders to bolster their position. For example, note how the words of Orson Pratt are "mined" to support the critic's assertion that the Book of Mormon condemns polygamy:

Jerald and Sandra Tanner quote Vol. 1, p. 480 of the Smoot hearings for this claim. They ignore the exchange on the very next page in which President Joseph F. Smith responds to this claim in the Senate, with the senate making the same error made by the Tanners and other critics. 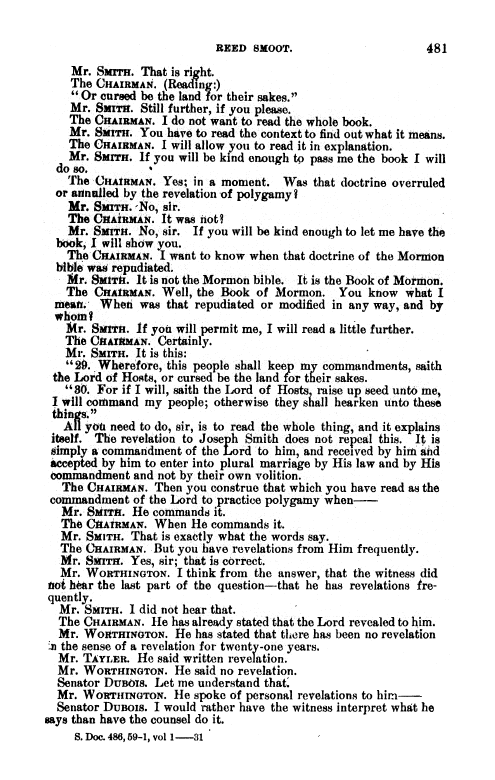 Joseph F. Smith insists that the senate consider what is now Jacob 2:30. Anti-Mormon attacks have not changed much since.

See also: D&C 132 versus Jacob 2: not in contradiction, and discussing different things