The few significant modifications were made by the Prophet Joseph Smith to clarify the meaning of the text, not to change it

The published text of the Book of Mormon has been corrected and edited through its various editions. Many of these changes were made by Joseph Smith himself. Why was this done?

The authenticity of the Book of Mormon is not affected by the modifications that have been made to its text because the vast majority of those modifications are minor corrections in spelling, punctuation, and grammar. The few significant modifications were made by the Prophet Joseph Smith to clarify the meaning of the text, not to change it. This was his right as translator of the book.

These changes have not been kept secret. A discussion of them can be found in the individual articles linked below, and in the references listed below, including papers in BYU Studies and the Ensign.

Joseph Smith taught "the Book of Mormon was the most correct of any book on earth, and the keystone of our religion, and a man would get nearer to God by abiding by its precepts, than by any other book."[1] As the end of the preceding quote clarifies, by "most correct" this he meant in principle and teaching. The authors of the Book of Mormon themselves explained several times that their writing was imperfect, but that the teachings in the book were from God (1 Nephi 19:6; 2 Nephi 33:4; Mormon 8:17; Mormon 9:31-33; Ether 12:23-26).

There are over 100,000 insignificant changes that have been made to the Book of Mormon

If one counts every difference in every punctuation mark in every edition of the Book of Mormon, the result is well over 100,000 changes.[2] The critical issue is not the number of changes that have been made to the text, but the nature of the changes.

Most changes are insignificant modifications to spelling, grammar, and punctuation, and are mainly due to the human failings of editors and publishers. For example, the word meet — meaning "appropriate" — as it appears in 1 Nephi 7:1, was spelled "mete" in the first edition of the Book of Mormon, published in 1830. (This is a common error made by scribes of dictated texts.) "Mete" means to distribute, but the context here is obvious, and so the spelling was corrected in later editions.

Some of these typographical errors do affect the meaning of a passage or present a new understanding of it, but not in a way that presents a challenge to the divinity of the Book of Mormon. One example is 1 Nephi 12:18, which in all printed editions reads "a great and a terrible gulf divideth them; yea, even the word of the justice of the Eternal God," while the manuscript reads "the sword of the justice of the Eternal God." In this instance, the typesetter accidentally dropped the s at the beginning of sword.

The current (1981) edition of the Book of Mormon has this notice printed at the bottom of the page opposite 1 Nephi, chapter 1:

Some minor errors in the text have been perpetuated in past editions of the Book of Mormon. This edition contains corrections that seem appropriate to bring the material into conformity with prepublication manuscripts and early editions edited by the Prophet Joseph Smith. 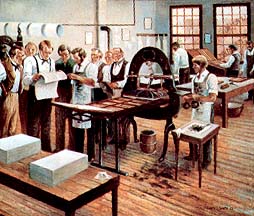 Some Book of Mormon changes were corrections of transcription or printing errors.

Changes that would affect the authenticity of the Book of Mormon are limited to:

There are surprisingly few meaningful changes to the Book of Mormon text, and all of them were made by Joseph Smith himself in editions published during his lifetime. These changes include:

The historical record shows that these changes were made to clarify the meaning of the text, not to alter it.

Many people in the church experience revelation that is to be dictated (such as a patriarch blessing). They will go back and alter their original dictation. This is done to clarify the initial premonitions received through the Spirit. The translation process for the Prophet Joseph may have occurred in a similar manner.