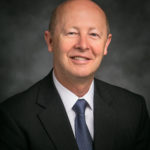 Richard E. Turley Jr. was named as the new managing director of the Public Affairs Department of The Church of Jesus Christ of Latter-day Saints on April 26, 2016.

Prior to his appointment, he served for eight years as assistant Church historian and recorder. He also served for eight years as managing director of the Family and Church History Department, overseeing the Church Archives and Records Center, the Church History Library, and the Museum of Church History and Art, which collectively contain the world’s largest collection of resources for the study of Latter-day Saint history and one of the richest collections on the settlement of the western United States.

He also oversaw the Church’s worldwide family history operations, which include hundreds of documentary microfilming and digital-imaging projects in dozens of countries; the Family History Library, the largest genealogical library in the world; the Granite Mountain Records Vault, a secure preservation facility for copies of millions of records from around the globe; over 4,000 branch family history centers on six continents; and teams that generated highly acclaimed software and data products.In addition, he supervised the Church Historical Department from 1986 to 2000 and the Family History Department from 1996 to 2000. The two departments were merged in 2000.

Under his guidance in 1999, the Family History Department launched the popular FamilySearch.org Web site, an online resource that provides free access to some of the world’s largest genealogical databases. Under his direction, the department also issued compact disc products containing useful historical data, including the records of the Freedman’s Bank (a treasure trove of information for African-American genealogy); the Mormon Immigration Index; Vital Records Indexes from several European countries and Australia; the 1880 United States Census; the 1881 Canadian Census; and the 1881 British Census, which was awarded the Besterman/McColvin Award from the Library Association of Great Britain. During his tenure, the department furnished data to the National Park Service and the Ellis Island Foundation for populating the Ellis Island database.

Under his editorship in 2002, the Family and Church History Department published Selected Collections From the Archives of The Church of Jesus Christ of Latter-day Saints (Provo: Brigham Young University Press, 2002), a collection of 74 DVDs containing nearly 500,000 color images of many of the Church’s most important early documents, including the Joseph Smith Collection and Brigham Young’s letterbooks. Critics have hailed Selected Collections as “the most important event in modern Mormon publishing,” “an achievement of such significance that no praise, no matter how effusive, seems sufficiently laudatory.”

Turley received a bachelor’s degree in English from Brigham Young University, where he was a Spencer W. Kimball Scholar. He later graduated from the J. Reuben Clark Law School at Brigham Young University, where he served as executive editor of the law review and was elected to the Order of the Coif. He also received the Hugh B. Brown Barrister’s Award, presented each year to the graduating student who demonstrates the highest standards of classroom performance.

He is a member of the editorial board for The Joseph Smith Papers and general editor of The Journals of George Q. Cannon series. His book Victims: The LDS Church and the Mark Hofmann Case (Urbana: University of Illinois Press, 1992) is an oft-cited history of the famous Hofmann forgery-murder case of the 1980s. Along with Ronald W. Walker and Glen M. Leonard, he has written Massacre at Mountain Meadows, was published in 2008 by Oxford University Press.

Turley served as president of the Genealogical Society of Utah and was a member of the committee for Fort Douglas Heritage Commons, a “Save America’s Treasures” official project that served as the athlete village for the 2002 Winter Olympics and currently houses University of Utah students. He has also been a vice president of the Small Museum Administrators Committee, American Association of Museums; a member of the Utah State Historical Records Advisory Board, National Historical Publications and Records Commission; and a member of the Copyright Task Force, Society of American Archivists.

In 2004, he received the Historic Preservation Medal from the Daughters of the American Revolution.