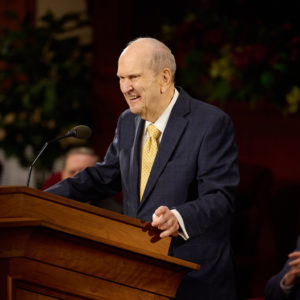 Every six months, dating back to 1840, Latter-day Saints gather as a worldwide congregation to worship, sing and learn at the feet of leaders we consider living prophets. It’s a wonderful time full of the Spirit of God. But recently, I can’t help feeling I miss the way General Conference used to be. I don’t mean the recent changes in whether we get a male priesthood session or the socially-distanced broadcasts necessitated by the pandemic. I mean the feeling of sitting down for it. It wasn’t so very long ago that I looked forward with unalloyed eagerness to gathering with family and food for a joyful weekend of spiritual edification.

I typically would spend time preparing by thinking of questions I needed answers to—praying and studying to be ready for a spiritual outpouring as I sat at the feet of prophets of God. Now, as I anticipate this coming general conference, I feel a need to prepare my defenses—avoiding the internet and bracing myself for an outpouring of criticism, much of which comes from current or former members of the Church.

The eagerness is still there, and I feel it more strongly every year. But more and more, it’s mixed with the somber realization that we have something of a crisis brewing among Latter-day Saints regarding the role of prophets.

Indeed, this coming weekend, we can expect to see voices within the Latter-day Saint online community decry certain talks or speakers as harmful or hurtful, and encourage others not to watch. We have witnessed sharp rebuttals and harsh criticism leveled at apostles in the recent past.

Yes, there has always been pushback from former members or others not actively involved in the Church. But there has been a noticeable increase in active members of the Church claiming that the Brethren are behind the times, trapped in their 20th-century patriarchal bigotry, and focused more on maintaining their power and money than on following Jesus Christ.

In other words, many active Latter-day Saints don’t have their own conviction that this Church is led by Jesus Christ, rather than by 15 fallible men.

Fallibility is a refrain that echoes back and forth across social media, only growing louder over time. Whenever a church leader says or does something unpopular (and contrary to the favored ideas of critics), anyone who speaks up in favor of that leader is met with a wall of arguments about infallibility: Joseph Smith said he’s fallible, and Elder Uchtdorf even admitted apostles make mistakes, so why is it so hard for you to accept they could be wrong about this?

Broken logic aside, there seem to be a growing number of people who have a stronger belief in the fallibility of prophets than in their unique access to the divine that defines the role of a prophet.

In brief: prophets can, and have, and do, make mistakes. I believe that’s a statement the presiding leaders of the Church of Jesus Christ themselves would agree with. But at the same time, I feel certain they are closer to understanding God’s will for the world and His people on earth than any of us are. That’s exactly what their calling entails.

Compared to many other Christians in the world, Latter-day Saints believe that God calls modern-day prophets to continue guiding the modern world, just as He did anciently.  Our own Guide to the Scriptures defines a prophet as:

A person who has been called by and speaks for God. As a messenger of God, a prophet receives commandments, prophecies, and revelations from God. His responsibility is to make known God’s will and true character to mankind and to show the meaning of His dealings with them.

We count these leaders as an immeasurable blessing from God. Our confidence in the truthfulness of our scriptures and our doctrine comes, not alone from tradition nor external analysis, but from our faith that the Lord chose and raised up these servants for our day.  More than just the head of the Church of Jesus Christ, we also consider the prophet as one the Lord has called to speak for Him in all the earth.

The Lord Himself made this abundantly clear, stating, “though the heavens and the earth pass away, my word shall not pass away, but shall all be fulfilled, whether by mine own voice or by the voice of my servants, it is the same” Speaking of the prophet, Christ also told the early Saints, “For His word ye shall receive, as if from mine own mouth, in all patience and faith.”

Some people are uncomfortable with what they see as a veneration of prophets, mortal and fallible as they are. Whenever hymns like “We Thank Thee O God for a Prophet” or “Praise to the Man” are sung, someone online is almost guaranteed to complain. Even common phrases like “follow the prophet” are often met with skepticism.

Instead, some advocate following only Jesus Christ—without going through 15 “old men” first. This may seem tempting since the whole purpose of the Church is to point us to Christ after all. But the Lord has said, “He that receiveth my servants receiveth me.” And the reverse is also true, as He told the prophet Samuel: “They have not rejected thee, but they have rejected me, that I should not reign over them.” John the Baptist also said, “Why is it that ye receive not the preaching of him whom God hath sent? If ye receive not this in your hearts … ye receive not him of whom I am sent to bear record; and for your sins ye have no cloak.”

These sobering verses make clear the seriousness of what we are considering.  Turning from the prophets is not a value-neutral proposition. And if we are to take these sacred words at face value,  we need to recognize it is not possible to reject or downplay the role of true prophets without also turning from Truth embodied, Jesus Christ.

Admittedly, sometimes it’s not easy for us to recognize the benefit of prophetic guidance. Early Saints could see Joseph Smith performing miracles and producing books of scripture, but the most recent addition to our canon happened before many of us were even born. We hardly ever hear of a prophet miraculously healing someone or predicting future events. It may almost seem like they’re not so much prophets anymore as simply the power structure that continues operating the Church.

But then again, maybe the reason why we only recognize prophetic visions and actions from the past is that they are often recognizable only in hindsight. When the Church pulled all missionaries out of Ukraine, for example, nobody thought it would actually come to war. But long before Putin’s troops crossed the border, all of the missionaries were already preaching the gospel in safer areas.

We could consider other examples, like the Family Proclamation being released years before the doctrines it explicates became controversial. Or we may eventually discover that church actions, like renovating the Salt Lake Temple to withstand earthquakes, were prescient.

But we should also remember that predicting the future was never the primary function of prophets, despite popular conception.  Their central role is and has always been to testify of Jesus Christ as His special witnesses, and teach His gospel. And that is the primary thing we see them do, every time we hear from them—whether in General Conference, at a BYU devotional, or in social media posts.

Wouldn’t it be great if we could all gather as a worldwide congregation to celebrate this blessing to have living prophets to guide this Church? When we teach our children to sing “Follow the Prophet,” we’re not conditioning them to be subservient, we’re giving them hope and confidence that we do have a direct line to Jesus Christ. We are reassuring them that Jesus Christ does lead His Church, and He communicates His will and His doctrine through the channels He has set up for us.

It hurts me to see how many active, ostensibly-believing members have begun to reject these beautiful truths. And it saddens me to witness the many over-focusing on prophetic fallibility, instead of rejoicing that the Lord prefers to do His work through the “weak and the simple.”

How different General Conference would be for all who approach it with gratitude rather than skepticism.  Jesus Christ is the head of this Church. I believe the special witness that the prophets and apostles bear of Him is the greatest gift we have in these tumultuous latter days, and the best way to come nearer to Him.

As I prepare for this coming weekend’s General Conference, I will brace myself for the hecklers in and out of our own membership. But far more than that, I will prepare myself to hear and recognize the Lord’s voice in the words of His chosen servants. I need that.

Join Latter-day Saints all over the world this weekend to tune in via the internet to sessions of conference on Saturday and Sunday, April 2nd and 3rd. Come listen to a prophet’s voice! Click here to see broadcast and scheduling details. 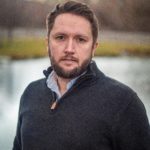 Robert Hill is a writer and filmmaker based in Logan, Utah. He is also the lead editor for Pop Culture on the Apricot Tree podcast.