If there is one question that seems to drive so much of modern life it is that of happiness.  What is it?  How does one attain it?  And perhaps more deeply, how does one know when one has attained it?  And it is therefore perhaps fitting that the Psalter, the great hymn book of the soul, begins with a description of what it is that characterized the ‘happy man’.

Readers of the English translation might be surprised by this, for many such translate the first line as ‘Blessed is the man’ not ‘Happy is the man.’  The reason is that the Hebrew word means both things in English.  In fact, we might say that not just the word but the concept of blessedness is the same as that of happiness in the Psalmists mind.  We live in a world where happiness is typically regarded as a psychological state.  The Psalmist’s world is one where happiness is being blessed by God. END_OF_DOCUMENT_TOKEN_TO_BE_REPLACED

Late last night the AP released video of Bishop Herrod, in his own voice, saying that the helpline told him he was not allowed to call, his hands were tied. He then goes on to say that he passed this information along to the next bishop. This is a helpful piece of information to have as previously it was unclear what he was told. It helps explain why the bishops did what they did. But I also think it’s fair to point out that this 9 min video is intended to give an emotional punch. Every visual image, piece of music, and word spoken is carefully chosen to drive home the same emotional point.  It’s actually rather well done if that is the goal. But they certainly are not going to include any information that takes away from their point, including things the bishop may have said that show a wider view of what happened. We get one short quote from him and nothing else. It is also fair to mention that an Arizona Grand Jury took up this question last year in case GJ21-0072.  They asked, “Did the bishops do anything legally wrong?” and while their conclusions are secret, we can observe that as of today the bishops have not been charged with any crime.

Also, by way of further correction it should be noted that no states have a law that makes reporting illegal, even by clergy.

Earlier this week, the Associated Press (AP) released an article telling the story of abuse that two young girls suffered, and the role that members of The Church of Jesus Christ of Latter-day Saints played in that story.  I’m a licensed mental health therapist and an abuse survivor. I spend hours every week working with traumatized clients who have also been through abuse. This story is not like my story, nor is it like most of my clients’ stories. It is the most horrific story of abuse I’ve ever heard. In addition to reading the AP article, I spent hours reading the court documents online. I figured that if I’m going to be reacting to this story, I needed to hear the whole thing. I won’t lay out the details here, and I do not recommend that most people go read the court documents, not if you value your sleep anyway.

For members of the church, part of what makes this story so awful is that the conclusions the reporter came to don’t show the whole picture. You know this intuitively, even if you can’t articulate what all of those nuances and differences are. But despite the problems with this article (and there are problems) it is worth reading. My own personal opinion is that every leader in our church could benefit from reading that story – not because he gets it 100% right, but because he is offering us an outsider’s view on a very tricky area. There are two extreme responses to this article that can easily be found online.  One is “circle the wagons” to protect the Church’s reputation. The other is to concede without critique the conclusion that the Church helps abusers continue abuse. Both are unhelpful. Instead, I am suggesting a humble reading of this article from an outsider’s perspective to see what can be learned or viewed in a new way. This reporter (Rezendes) has a long history of solid reporting on sexual abuse issues.  He is portrayed in the movie Spotlight about how he helped break the story of abuse in the Catholic Church while he was working for the Boston Globe. He’s not a random, unknown person sitting behind a keyboard somewhere making things up. We would be wise to listen and learn. So, what can be learned? END_OF_DOCUMENT_TOKEN_TO_BE_REPLACED

Lessons Learned from the Book of Job

”No pain that we suffer, no trial that we experience is wasted… All that we suffer and all that we endure, especially when we endure it patiently, builds up our characters, purifies our hearts, expands our souls, and makes us more tender and charitable, more worthy to be called the children of God.” (Orson F. Whitney, in Kimball, Faith Precedes the Miracle, p. 98.)

The book of Job is part of the so called ’wisdom literature’ of the Bible. The text is composed in beautiful Near Eastern prose, and is a tale of a man who has a dramatic encounter with God’s justice, to say the least. END_OF_DOCUMENT_TOKEN_TO_BE_REPLACED

With all of that political intrigue, what’s more interesting is how the Lord sets up a woman to be in the right place at the right time to preserve His chosen people. No nefarious plot by an evil man is a match for God’s great ability to see beforehand and place his servants in the position where they can do the most good. END_OF_DOCUMENT_TOKEN_TO_BE_REPLACED 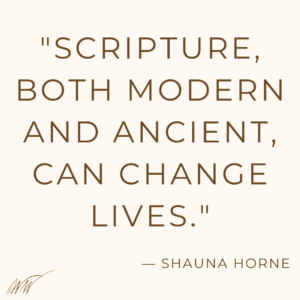 Wilford Woodruff said, “Brethren and sisters, let us read the revelations of God for ourselves, and when we read them, let us believe them, and try to live in such a way that we may be ready for whatever dispensation the Lord may have in store for us.” END_OF_DOCUMENT_TOKEN_TO_BE_REPLACED

The widow of Zarephath is one of my favorite stories from the Old Testament. Perhaps the greatest reason that this story resonates with me is because the widow is an outsider. She is not a member of the house of Israel—a fact the Savior confirms (see Luke 4:24–30)—and she meets Elijah at the gate of the city. That is, she is physically on the outskirts of this village where she lives. At least symbolically, the location of the widow’s initial contact with Elijah infers that she is marginalized. Yet her belonging came as she did one thing: she obeyed a prophet. END_OF_DOCUMENT_TOKEN_TO_BE_REPLACED

There are a number of points to observe in the text.  First, it is important to notice how the writer echoes the language of Genesis 3.  As Eve saw that the forbidden fruit was pleasing to the eyes and reached out and took it, so David sees that Bathsheba, one who is forbidden to him because married to another, is beautiful and takes her.  As humanity fell in the garden, so David as king in a sense falls here.  Hence his reign will never be the same again.  And in seeing David’s fall, we learn something of the sinful psychology of our own hearts: sin places me at the center and makes everything else instrumental to my satisfaction, desires, and happiness. END_OF_DOCUMENT_TOKEN_TO_BE_REPLACED

The Asked King and the Beloved King-to-be: Saul, David, and Ancient Israel’s Rejection of the Lord’s Kingship

The names of ancient Israel’s first two major[1] royal figures, Saul and David, have clear, distinctive meanings. Saul (šāʾûl) means ‘asked’ and David (dāwid or dāwîd) means ‘beloved.’ The Deuteronomistic editor and narrator[2] of the Book of Samuel used the meaning of these names to help tell the story of Israel’s formal rejection of the Lord’s kingship and the eventual rise of the Davidic dynasty in Judah. The meanings of their respective names figure not only into why each man became king, but also why their kingships ran aground and, in their respective ways, failed.

When reading the scriptures, especially as one reads through the Old Testament, it is always helpful to ask the following questions:

Seeing the Savior in the text as he interacts with his covenant children is of utmost importance. Elder Henry B. Eyring (at the time) made the following promise: END_OF_DOCUMENT_TOKEN_TO_BE_REPLACED

By Elder Kim B. Clark

(An address given at the 2020 FAIR Conference)


I am grateful for the opportunity to speak to you today. I am not only grateful to be with you, but I am grateful for all of you who seek to help people strengthen, or recover, or restore, or establish faith in Jesus Christ, and His marvelous work in our day. END_OF_DOCUMENT_TOKEN_TO_BE_REPLACED