Although there are differences, a covenant is functionally very similar to a contract or treaty. Among the ancient Israelites and their neighbors, the covenant pattern had several parts, though not every part was expressed in every covenant, nor was the order of these elements rigidly fixed. Understanding this pattern can help us understand the scriptures and the temple ordinances.

All of these elements can be seen in the experience of the Israelites at Sinai (Exo. 20-24, esp. Exodus 24:5-8) and elsewhere throughout the Old Testament, and even the Book of Mormon, as in Alma 46:21-22 (discussed below). Covenants were often enacted in a covenant ceremony or ritual, most frequently involving the sacrifice of an animal. Sometimes the covenant ceremony also included a ritual meal.

In Hebrew, one does not “make” a covenant. Rather, one “cuts” a covenant (Heb. karat berit), perhaps because, frequently, an animal is “cut” and killed in the covenant-making process. (Joseph Smith seems to have been particularly aware of this, as JST Hebrew 9:17-18 demonstrates. This passage is not included among the JST excerpts in the LDS KJV, but it can be read here.)1 Normally, the person who brought the animal cut its throat with his right hand and collected the the blood with his left. This blood was the “blood of the covenant,” as in Exo 24:8. When instituting the sacrament, Jesus adapted the covenantal/sacrificial symbolism of the Law of Moses by calling the sacramental wine “my blood of the new covenant.” ( Matt. 26:28.)

In effect, the sacrificed animal stood as a proxy, as a physical representation of  the covenant-maker if they failed to live up to the terms of the covenant. (Well, maybe. See below). Scholars refer to physical symbolism as a “simile curse.” In Exodus 24, the “blood of the covenant” is splashed on the Israelites, as the blood would be if their throats had been cut as the animal’s throat had been cut. This is widely recognized. The sprinkling of blood on the people was a

symbolic action in which the people were identified with the sacrificed animal, so that the fate of the latter is presented as the fate to be expected by the people if they violated their sacred promise (i.e., it is a form of self-curse). Thus the ratification ceremony was, in effect, the pledging of their lives as a guarantee of obedience to the divine will.”

For a concurring analysis,

The sprinkling of blood is a ritualized oath-curse—in technical terminology, a Drohitus. The sprinkled blood of the slain animals represents the curse of death that both parties invoke upon them- selves should they prove unfaithful to their covenantal obligations. The mutual sprinkling of blood may also convey the idea that both parties now share one blood—that is, they have become kin.

The Israelites’ neighbors made these curses explicit in the written record of their treaty/covenants.

Another example, chosen from many, comes from the city of Alalakh

Abbael swore the oath to Yarimlim and cut the neck of a lamb, [saying] ‘If I take back what I have given you [then may such happen to me.]‘

The Book of Mormon reflects this ancient pattern  as well.  Look at Alma 46:20-22. Moroni comes forth with the Title of Liberty, preaching.

when Moroni had proclaimed these words, behold, the people came running together with their armor girded about their loins, rending their garments in token, or as a covenant, that they would not forsake the Lord their God; or, in other words, if they should transgress the commandments of God, or fall into transgression, and be ashamed to take upon them the name of Christ, the Lord should rend them even as they had rent their garments.  Now this was the covenant which they made, and they cast their garments at the feet of Moroni, saying: We covenant with our God, that we shall be destroyed, even as our brethren in the land northward, if we shall fall into transgression; yea, he may cast us at the feet of our enemies, even as we have cast our garments at thy feet to be trodden under foot, if we shall fall into transgression.

Note the connection of covenant, token, and simile curse;  they tear their clothes and trample them under foot as a physical symbol. For more on simile curses in the Book of Mormon and the ancient Near Eastern background, see here.

Thus, the Israelites in Exodus 24 bound themselves to follow the Law (Heb. torah or “teaching”) of Moses on pain of death, a very solemn and serious covenant indeed. Given that the text recounts the Israelites almost immediately engaging in idolatry and other serious problems, why don’t we have tons of  stories of Israelites being killed for violating the Law, as implied by the simile curses? As far as I know, we don’t have any. There are several possibilities.

I should note that what I am setting forth here is not the full Law of Moses, which was a complex and diverse set of “performances and of ordinances, a law which they were to observe strictly from day to day, to keep them in remembrance of God and their duty towards him.” I have simplified the presentation somewhat to show how “these things were types of things to come” (Mosiah 13:30-31.) That is, the sacrifices of the law of Moses typified “the great and last sacrifice” (Alma 34:10-14).

Though it should be obvious how this relates to Jesus and the Atonement, let me point out a few scriptures. Remember that “the reward of sin is death” (Rom. 6:23). Paul taught that Jesus “redeemed us from the curse of the law by becoming a curse for us — for it is written, ‘Cursed is everyone who hangs on a tree.’” (Gal. 3:13). The Law of Moses specified in Deuteronomy 21:22-23 that someone who committed a crime worthy of death was cursed and their body would be publicly displayed on a tree or stake. Paul draws on that passage to show that Jesus, like the burnt offering, bears the curse of the covenant for us, goes in our place, and dies in our behalf. “Surely, he hath borne our sins, and carried our sorrows.” (Isa 53:4). In doing so, Jesus, by his own blood, both fulfilled the Old Covenant and was the sacrificial animal for ratifying the New Covenant, which we make at baptism and renew each week by partaking of the sacrament. (See Jeremiah 31:31, Hebrews 9, Matthew 26:28, Moroni 4-5)

So just how does all this relate to LDS Temple covenants? For starters, we don’t sacrifice animals there and there’s no blood involved. But, the ordinances and other things in the Temple are highly symbolic and referential. As with all symbols, they can mean different things depending on the context they’re in and the background of the interpreter. Some symbols may already be familiar to you, depending on your background and familiarity with symbolic systems.

Israelites sacrificed animals in making covenants, binding them to obey the Lord’s commandments. Indeed, they were commanded to do so in specific terms by the Law of Moses. “Sacrifice” in English carries much less specific meaning than in Hebrew, where zevach literally means “ritual slaughter (of an animal.)” There is only one exception, to my knowledge. Psalm 51:17 teaches that “the sacrifices of God are a broken spirit: a broken and a contrite heart….” That should sound familiar. Once Jesus fulfilled the Law of Moses by his death, he taught the Nephites that they should “offer up unto me no more the shedding of blood; yea, your sacrifices and your burnt offerings shall be done away, for I will accept none of your sacrifices and your burnt offerings.” What were they to offer as a sacrifice? “And ye shall offer for a sacrifice unto me a broken heart and a contrite spirit.” (3 Nephi 9:19-20) In other words, the Nephites were to continue making their sacrifices of will, of humbling themselves and committing to do what God asked, just as they had done all along, but these were not to accompany animal sacrifice. Again, note the connections between atonement, sacrifice, and humbly keeping covenants in 2 Ne. 2:7 “Behold, he offereth himself a sacrifice for sin, to answer the ends of the law, unto all those who have a broken heart and a contrite spirit;”

To summarize, ritual action (sacrifice of animals, symbolic representations of curses, etc.) was associated with and designed to teach moral action (fidelity to covenants).

Postscript: One interesting thing is that simile curses like those of the Bible and ancient Near East seem pretty common. Think about kids saying “cross my heart, stick a needle in my eye.” European and American masonry involved simile curses in their ceremonies, which “serve[d] the purpose of reminding [them] of the seriousness of [their] undertakings.”  I suspect it’s just human nature to put oneself on the line to emphasize fidelity and reliability. (Hey, God does it in the Bible, where he swears by himself.) On the other hand, at least with Masonry, a lot of their material was derived or adapted pretty directly from the Bible and Biblical tradition. 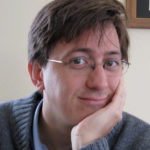 Ben Spackman is a PhD candidate in American Religious History at Claremont. His dissertation examines the intellectual roots of LDS creationism and evolution in the 20th century. Prior to his work at Claremont, he received a master’s degree and did PhD work in Old Testament languages and literature at the University of Chicago. He is a guest editor of a special edition of BYU Studies dedicated to biological evolution and LDS faith, and writes at BenSpackman.com.