General Conference is now just 2 days away! It will be held October 1-2, and will have morning and afternoon sessions on Saturday and Sunday, along with an evening session for everyone on Saturday. More information is available here.

My earliest memories of General Conference are of me and my siblings playing with Legos while our parents tried to watch (and listen) in the same room. I knew it was our church leaders and prophet speaking, but to me it was just an opportunity to not have to go to church in person. As I got older, I paid a little more attention – particularly when my dad would take me to the stake center to watch the Priesthood session, and the times I took a date to Temple Square to watch it – but I didn’t start fully appreciating it until my mission. As a missionary, I fell in love with General Conference. I watched all the sessions all the way through for the first time in my life. Part of it may be that I realized how special this was for the members I watched it with – they spent the entire day at the church, and had a picnic together between sessions – but I think it was the first time I realized just what it was that I was watching: that these leaders were called of God to lead His church, and they were telling us what we needed to hear at that moment. 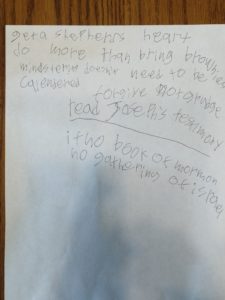 Since then, I have tried to watch as much of General Conference live as I can. And I have tried to set an example for our children, who have impressed me with being much more interested than I was at their age. I remember one of my daughters, when she was maybe 5 years old, watching Pres. Hinckley talk and asking if he could see us through the TV. When they became old enough to go to Seminary, they began keeping notes. It was probably by assignment, which made me really appreciate their Seminary teachers, but it became a habit that they still do. And I was extremely impressed the time my teenage son invited his friends over to watch a Saturday afternoon session, and they actually sat quietly – somewhat reverently even – and watched together. 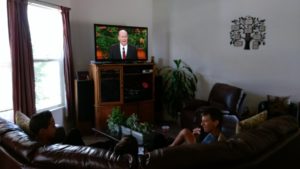 I personally have never kept actual notes the way my children do, but I have gotten in the habit of going on Twitter and sending out quotes and impressions throughout a session or two. And I have found myself referring back to them later. As a family we also try to watch one General Conference talk a week during the 6 months between them. It’s funny how I couldn’t necessarily tell you offhand what a particular leader said, but once their talk starts playing, it tends to come flooding back.

I asked my wife if she wanted to say anything for this, and she said all she needs is cinnamon rolls and pajamas. She really enjoys the family time at home as we watch our leaders speak. It is also her that keeps us going on watching talks between Conferences.

One of the talks that I remember most was by Pres. Oaks on “Healing the Sick” in April 2010. Last year I enjoyed reading a biography of him that had just come out, and learned some background related to that talk. He seems to have gained faith in the power of the priesthood early in his life. His father was a doctor and someone once “asked him if he was going to grow up to be a doctor like his father and heal people. ‘No,’ he answered. He was going to be a ‘high priest like my father and bless babies.’” Later, when he was ten years old, he had an experience that “has been a significant influence on my faith in the power of the priesthood.” When he was staying with his grandfather, his younger cousin fell unnoticed into an irrigation ditch and wasn’t found for 20 or 30 minutes. He had been floating facedown and was dead. His grandfather gave him a blessing and he was revived. “‘He suffered no after-effects, filling a mission to Australia, marrying a lovely girl, and living an exemplary life as a Latter-day Saint husband and father. I am witness,’ Dallin concluded, ‘to the miracle of his childhood death and restoration.’” [1]

I appreciate how Pres. Oaks always states things very clearly. Unfortunately, some people don’t seem to appreciate that as much. It should be known that, according to the biography previously mentioned, “Just as he had before his call to the apostleship, he relied heavily on revelation to guide him in what he said to audiences after he became a member of the Twelve. He felt the heavy responsibility of spiritually feeding those who came–or tuned in–to hear him, and he wanted to align his will with God’s in selecting, developing, and addressing topics of importance in advancing the Lord’s purposes.” [2]

It seems to have become common recently for people to expect changes to be announced more frequently in General Conference under Pres. Nelson than in the past. Regarding this, Pres. Oaks said, “Change is almost always exciting… But as I have thought about the many recent changes in the Church, I have felt some caution. The changes we have experienced in our Church meetings and policies should help us, but by themselves they won’t get our members to where our Heavenly Father wants us to be. The changes that make a difference to our position on the covenant path are not changes in Church policies or practices, but the changes we make in our own desires and actions.” [3]

I look forward to watching General Conference this weekend. It always goes by way too quickly, and leaves me wanting more of the guidance and the Spirit that I feel. We are truly blessed to be living in a time when such guidance from church leaders is so accessible. I pray that I can receive what is said in the spirit it was intended, and make those changes in my life that will bring me closer to my Heavenly Father as I am inspired to do so.

Here are some comments from a few other FAIR volunteers:

In one sense, I am afraid I don’t to a lot in terms of formal preparation.

1. I make sure I have set aside uninterrupted time to watch it.
2. while I try to frequently attune to the Lord in my daily doings, I make a particular effort to try to be receptive during the presentations.
3.I keep in mind that many of the presenters have been praying and trying to be in tune during their preparation and I try to pick-up on that aspect as they are speaking.
4. I am very aware of the spiritual entrapments of our daily world and am particularly interested in the particular take the General Authorities emphasize at that moment.
5. Over the years, I have found I more and more keep thinking, “This conference is even better than the last, and the last was great”. Wondering, are they getting better or am I changing? 🙂

1. I ponder on the things from the last conference, if there are any changes we have managed to make.
2. I ponder “where we are now,”, what can I expect to hear and find out that my thoughts were wrong or right.
3. I study the scriptures and pray that I can understand what is being said.
4. Today I listen to the conference in my room with earphones with the language I wish and my husband listens in his room with his earphones in Norwegian. I need a pen and paper to write down the important or good messages I find in the speeches.

I may think a speech is not “good”… but I think maybe it was good for someone else, I am not the only listener. I am aware that some things may perch my heart, but that is not the fault of the conference or the speaker, but mine and maybe it is right there that I should try to do something. I think we should try to help the person [with negative thoughts] to understand or at least to bear the conflict they have got. There is a difference between misunderstanding something or not having enough knowledge to know your thoughts are wrong against swallowing willfully anti stuff. And even in the last one we can do miracles by changing the surroundings. Like in Montessori pedagogy the environment is highly important and by changing the environment you can change the behaviour of a child.

1. I have taken to heart something an elders quorum president told me, which is determine an area of my life where I need improvement and prayerfully ask a question related to that with the expectation it will be answered during General Conference. It gets me praying and being mindful of General Conference as well as areas where I can improve.

2. When it comes to negative peer interactions. I simply reiterate the truths I know. Nothing else I feel I can do. 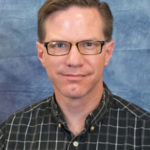