This week’s lesson on the Atonement takes what is the most important part of what was studied last week and goes into much greater detail. As such, many of the potential issues were covered in last week’s blog post. However, there are a couple of areas that may be helpful to go over this week.

Gerald N. Lund wrote an article for the Ensign in 1990 that explains in detail why the atonement was necessary and how it works, calling the Fall of Adam “one of the most misunderstood and misinterpreted doctrines in all of Christianity”: Gerald N. Lund, “The Fall of Man and His Redemption,” Ensign, Jan. 1990, 22.

Most Christians (not just Latter-day Saints) believe that everyone will be resurrected. However, there are some critics that claim such beliefs are unbiblical, and that only those who are saved will be resurrected. While the Book of Mormon speaks plainly of the resurrection being universal (see, for example, Alma 11:40–45 and Mormon 9:12–14), the Bible also speaks of it. Here are some examples:

This doctrine was also clearly taught in the early Christian church:

It is unfortunate but telling that our most important doctrines receive so much criticism from those who would have the world believe that we worship “a different Jesus.” Indeed, if our Jesus is different, it is because we believe in the uncorrupted concept of Jesus Christ found in the scriptures, and not in the creeds of man.

This week’s priesthood and Relief Society lesson is on The Life of Christ. Listed below are links to related issues from the FAIR web sites, organized according to the sections of the lesson.

The Life of Christ Was Predicted Long before His Birth
Book of Mormon/Textual changes/”the Son of”
Alma 7:10 – Jerusalem vs Bethlehem

He Was the Only Begotten of the Father
The “Mormon” vs. the “Christian” Jesus
Worship different Jesus
Jesus Christ/Brother of Satan
Jesus Christ/Conception

He Led a Perfect Life
Gordon B. Hinckley states that Latter-day Saints don’t believe in the “traditional” Christ
Baptism essential

He Organized the Only True Church
Apostasy

This week’s lesson is on the scriptures. As you can imagine, there are numerous articles available from FAIR that relate to this chapter. In most cases, rather than providing links to individual articles, I will simply make reference within each part to relevant pages from the FAIR Topical Guide on our main web site, as well as the Topical Guide on our wiki site. This week I will also take the opportunity to highlight presentations from past FAIR conferences that go along with each topic. (And if you enjoy reading the conference presentations, you are invited to join us this year on August 5 and 6.)

As a reminder, “If you have been called to teach a quorum or class using [the Gospel Principles] book, do not substitute outside materials, however interesting they may be. Stay true to the scriptures and the words in the book. As appropriate, use personal experiences and articles from Church magazines to supplement the lessons.” (“Introduction,” Gospel Principles, (2009), pg. 3.) The resources provided here are not meant to replace or supplement the prescribed lesson material, but are for use in personal study and to help provide background knowledge for answering any issues that may arise in class.

The Scriptures Are Available to Us Today
Open canon vs. closed canon
Supposed contradictions in the scriptures
The Mistakes of Men: Can the Scriptures be Error-Free?

The Bible
The Corruption of Scripture in the Second Century
As Far as it is Translated Correctly: The Problem of Tampering with the Word of God in the Transmission and Translation of the New Testament
FAIR wiki
FAIR Topical Guide

Studying the Scriptures
The Impact of Mormon Critics on LDS Scholarship
The Fallacy of Fundamentalist Assumptions
“Uh oh!” to “Ah ha!” in Apologetics: 20/20 Foresight for a Faithful Future in Defending the Church
Spiritual Experiences as the Basis for Belief and Commitment
“Believest thou…?”: Faith, Cognitive Dissonance, and the Psychology of Religious Experience
What I Learned about Life, the Church, and the Cosmos from Hugh Nibley

This week’s lesson is Chapter 9: Prophets of God. There are several different potential apologetic themes. As always, please note that by providing these resources we are not suggesting that they be included in any lessons taught. Rather, they are intended to be used as helps by the instructor or participating class members in case the issues do come up during class or personal study.

No more prophets after Christ?

What is “Official” LDS Doctrine?

When the Prophet Speaks, Is the Thinking Done?

Do Mormons blindly follow their leaders and simply do what they’re told?

As a youth, I got to know Joseph Smith a little through reading things such as Joseph Smith History in The Pearl of Great Price, Truth Restored, and parts of the Documentary History of the Church. I then got to know the prophet better as a missionary by listening to bootleg tapes of Joseph Smith the Prophet by Truman Madsen that were passed around the mission. I enjoyed them so much that when I returned home, I bought a legitimate set of the tapes.
END_OF_DOCUMENT_TOKEN_TO_BE_REPLACED

This week’s lesson is on prayer. Below is a list of links taken from the main FAIR web site and the FAIR Wiki, which may help in discussing possible questions or issues that could potentially come up while studying this topic. Again, please note that by providing these resources we are not suggesting that they be included in any lessons taught. Rather, they are intended to be used as helps by the instructor or participating class members in case the issues do come up during class or personal study.

Are we allowed to pray to our “Heavenly Mother?”

Praise in Prayer and Song

Gaylen Hinton, “I need help in praying for and receiving guidance and personal revelation.,” Ensign, October 1993, 60.

Burning in the bosom

Due to the number of questions that have been submitted through FAIR’s “Ask the Apologist” feature that have coincided with the lessons taught in Relief Society and priesthood quorums from the Gospel Principles manual so far this year, we are starting a series of blog posts that will address potential issues in each lesson. Please note that by providing these resources we are not suggesting that they be included in any lessons taught. Rather, they are intended to be used as helps by the instructor or participating class members in case the issues do come up during class.

The Holy Ghost Came to Adam and Eve

Depending on how far you get into Moses 5 (the entire chapter is listed under “Additional Scriptures”), several different issues could come up:

Attributes of the Holy Ghost

The Mission of the Holy Ghost

Please feel free to comment about any other potential issues I may have missed. 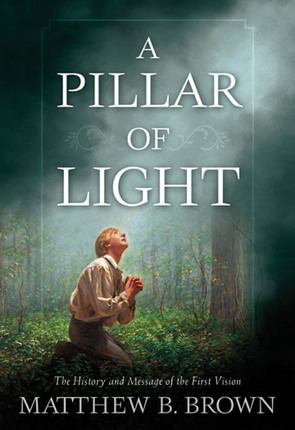 In the October 1998 General Conference, Gordon B. Hinckley said that “our entire case as members of The Church of Jesus Christ of Latter-day Saints rests on the validity of this glorious First Vision….Nothing on which we base our doctrine, nothing we teach, nothing we live by is of greater importance than this initial declaration.” (Page ix.) In April 1984, James E. Faust pointed out that “since no one was with Joseph when this great vision took place in the wooded grove near Palmyra, a testimony concerning its reality can come only by believing the truthfulness of Joseph Smith’s own account or by the witness of the Holy Ghost, or both.” (Page x.) With these statements in mind, it is not surprising that the First Vision has been one of the favorite things for critics of Joseph Smith to attack. In this book, Matthew Brown lays out the historical facts from which one can be helped to gain a testimony of the event, strengthen existing convictions, and help answer any doubts or confusion arising from critics’ claims.
END_OF_DOCUMENT_TOKEN_TO_BE_REPLACED