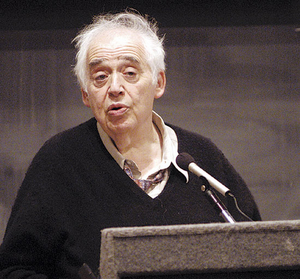 That is why Bloom’s most recent piece in the New York Time was simultaneously rewarding and disappointing. On the one hand, Bloom offers sagacious insights on the importance of a Mormon participating in the upcoming presidential election, yet he also makes several blunders in both fact and interpretation. Given the nature of this blog, I will defer from offering an analysis or response to Bloom’s political forecasts. Instead, I wish to clear up a few mischaracterizations in Bloom’s piece that detract from the quality of his article.

For starters, I am not convinced that President Thomas S. Monson is “indistinguishable from the secular plutocratic oligarchs who exercise power in our supposed democracy”. Nor am I in agreement that the Church is an “empire of corporate greed has little enough in common with the visions of Joseph Smith”. Although this charge has been leveled at the current Church administration by others,[3] I find it to be little more than a meaningless caricature.[4] Furthermore, I take exception to Bloom characterizing the Church as an “empire of corporate greed”. For one thing, Church enterprises are not designed to make anyone rich but rather to ensure the long term financial viability of the Church and pay for current programs that benefit many people. Furthermore, except for a few exceptions at the top of Church hierarchy, and those with careers in Church education facilities and programs, the people on the ground who actually run the Church are unpaid volunteers.

What Professor Bloom likewise fails to report is that the “empire of corporate greed”  has provided over 1 billion dollars in humanitarian aid to 167 different countries and untold thousands of individuals since 1985, regardless of religious, political, or cultural identity. I say this not to brag, though the Church’s humanitarian services are indeed praiseworthy, but rather to point out a flaw in Bloom’s characterization. Contrary to what Bloom portrays, the Church leadership is not amassing personal wealth from tithing and other donations. Instead, tithing money and other charitable donations go towards maintaining Church programs and property as well as the Church’s humanitarian efforts.

Ultimately, however, this discussion is highly subjective, as there is no empirical means by which to objectively prove or disprove Bloom’s characterization of President Monson or the modern Church leadership. (Although, as previously indicated, I believe that a strong case can be made against such a characterization.)

“The accurate critique of Mormonism,” continues Bloom, “is that Smith’s religion is not even monotheistic, let alone democratic. Though the Church of Jesus Christ of Latter-day Saints no longer openly describes their innermost beliefs, they clearly hold on to the notion of a plurality of gods. Indeed, they themselves expect to become gods, following the path of Joseph Smith.” I have a few problems with this characterization. First, I find it difficult to accept that the modern Church “no longer openly describes” the doctrine of exaltation or human deification when the subject is included in official Church magazines, manuals, and study guides.[5] Indeed, a search of the word “exaltation” in the search engine on LDS.org yields an impressive 2,040 results. Joseph Smith’s famed King Follett Discourse, wherein the Prophet elucidated the doctrine of human divinization, has been reprinted in the April and May 1971 editions of the Ensign. But perhaps the most disappointing mistake made by Bloom is his statement that “Mormons earn godhead though their own efforts, hoping to join the plurality of gods, even as they insist they are not polytheists”. This is an unfortunate misunderstanding of the LDS doctrine of exaltation. By no means do Latter-day Saints expect to earn exaltation “through their own efforts”. Rather, they insist that only through the Atonement of Jesus Christ by obedience to His Gospel and His commandments can they hope for eternal life and exaltation (Articles of Faith 1:3-4). As President David O. McKay once said:

I am not unmindful of the scripture that declares: ‘by grace are ye saved through faith; and that not of yourselves: it is the gift of God.’ (Ephesians 2:8.) That is absolutely true, for man in his taking upon himself mortality was impotent to save himself. When left to grope in a natural state, he would have become, and did become, so we are told in modern scripture, ‘carnal, sensual, and devilish, by nature.’ (Alma 42:10.) But the Lord, through his grace, appeared to man, gave him the gospel or eternal plan whereby he might rise above the carnal and selfish things of life and obtain spiritual perfection. But he must rise by his own efforts and he must walk by faith. ‘He who would ascend the stairway leading upward to eternal life must tread it step by step from the base stone to the summit of its flight. Not a single stair can be missed, not one duty neglected, if the climber would avoid danger and delay and arrive with all safety and expedition at the topmost landing of the celestial exaltation.’ The responsibility is upon each individual to choose the path of righteousness, of faithfulness and duty to fellow men. If he choose otherwise and as a result meets failure, misery, and death, he alone is to blame.[6]

Thus, although obedience to the Gospel is indeed an essential element to achieving salvation and exaltation, the Latter-day Saints do not believe that they can earn such through their own efforts or on their own terms.[7]

Finally, a brief note on the following comment by Professor Bloom:

There are other secrets also, not tellable by the Mormon Church to those it calls “Gentiles,” oddly including Jews. That aspects of the religion of a devout president of the United States should be concealed from all but 2 percent of us may be a legitimate question that merits pondering. When I wandered about the South and Southwest from 1989 to 1991, researching American religion, I was heartened by the warmth that greeted me in Pentecostal and Baptist churches, some of them independent indeed. But Gentiles are not allowed in Mormon temples.

I can sympathize somewhat with Bloom here. On my mission in New England and through various correspondences with non-Mormon friends and acquaintances, I encountered many individuals who felt uneasy with the secrecy surrounding the ordinances of the temple. It also doesn’t help that Mormons can, at times, be unnecessarily reticent in relaying the details of the temple ordinances. However, I hope that Professor Bloom will appreciate the fact that for Latter-day Saints the ordinances of the temple are of the utmost sanctity. As such, in harmony with ancient biblical precedent, only those worthy of the Lord’s presence, either ritually in the temple or literally in theophany, are allowed to enter the most sacred confines of the Lord’s sanctuary (e.g. Psalms 15, 24:3-4).

Why are these temple ordinances guarded with such secrecy when anyone who really wants to can find out what goes on? Even though everyone may discover what goes on in the temple, and many have already revealed it, the important thing is that I do not reveal these things; they must remain sacred to me. I must preserve a zone of sanctity which cannot be violated whether or not anyone else in the room has the remotest idea what the situation really is. For my covenants are all between me and my Heavenly Father.[8]

Again, I do not wish to devolve into a discussion of Bloom’s political arguments. In summary, despite its flaws I welcome Bloom’s analysis over the frothy polemics offered by other self-certified “experts” of Mormonism. If nothing else, I got a chuckle out of this apt observation:

Mormonism’s best inheritance from Joseph Smith was his passion for education, hardly evident in the anti-intellectual and semi-literate Southern Baptist Convention. I wonder though which is more dangerous, a knowledge-hungry religious zealotry or a proudly stupid one?[9]

[3]: Daymon M. Smith, The Book of Mammon: A Book About the Corporation that Owns the Mormons (Seattle, WA: CreateSpace, 2010).

[4]: A reading of the recent biography of President Monson will reveal a complex individual who is, above all else, genuinely concerned for the welfare of others and is sincerely dedicated to serving the Church. See Heidi S. Swinton, To The Rescue: The Biography of Thomas S. Monson (Salt Lake City, UT: Deseret Book, 2010).

[7]: For an excellent exploration into the LDS view of deification, see  Jordan Vajda, “Partakers of the Divine Nature”: A Comparative Analysis of Patristic and Mormon Doctrines of Divinization (Provo: Foundation for Ancient Research and Mormon Studies, 2002), located online here.

[9]: It may just be a bit of Schadenfreude within me, but I am not at all disappointed to hear a Yale scholar refer to the folks who gave us such gems as The Mormon Puzzle: Understanding and Witnessing to Latter-day Saints as “semi-literate” and “proudly stupid”. But, as demonstrated at length by Professor Daniel C. Peterson, “What Certain Baptists think They Know about the Restored Gospel,” FARMS Review of Books, 10/1 (1998): 12-96, online here, this description by Professor Bloom is rather charitable.