Religious Freedom for All

As I read Doctrine and Covenants 134 today I was reminded of a Swedish debate article I encountered back in 2012. It was written by Björn Ulvaeus, band member of the pop group Abba. On a personal note, I have greatly admired Ulvaeus’ talents throughout the years, especially his lyrical compositions. This time however, his words were less uplifting, at least from a Latter-day Saint perspective.

Ulvaeus, who is also a representative of the Humanist Association in Sweden, commented on the presidential race between Barack Obama and Mitt Romney. In essence, the musician presented a rather gloomy picture of the world should Mitt Romney be elected president. It would be a ”doomsday” indeed. Ulvaeus compared the ”fundamentalist” Romney with Iran’s past president, the fundamentalist Ahmadinejad, and claimed that the Mormons, like the Islamists, wanted their religion to govern the laws of the land. And if that happened, good riddance to the rights and liberties of the people.

Without endorsing Mitt Romney or personally criticizing Björn Ulvaeus, I felt disappointed by the content of the article. I wasn’t surprised – worse things had been written about the Church, of course – but I remember feeling how unwarranted this fear of our church was; if people truly knew where we stood on the matter of state and religion, they would be far more grateful than fearful. Why? Because the Church officially opposes religions, ours included, be given the mandate to create laws and policies that compromises the rights and liberties of other groups.

This is not just a point of view, but a point of solid doctrine, found in our latter day revelations. Our Articles of Faith make clear that we, as members of the Church, want to grant every man and woman on this earth the right to exercise their free agency and freedom of religion.

”We claim the privilege of worshiping Almighty God according to the dictates of our own conscience, and allow all men the same privilege, let them worship how, where, or what they may.” (Article of Faith 11)

This article of faith is of great importance, because it tells us that not only is freedom of religion important to those who exercise faith, but also that the right to believe differently – or not to believe, we must add – is a divine privilege. All men must have the right to follow the conscience of their hearts, as long as that freedom does not infringe on the rights of others. This is the official doctrine of the Church of Jesus Christ of Latter Day Saints.

I feel the need to stress the importance of this. Think about it! How many churches or religions do you know that have this doctrine embedded in their creeds or declarations? I could stand corrected, but I am aware of none. I am proud to a part of a church that clearly promotes freedom of religion, not just for its own members, but also as an extended right for all mankind. It not only says a lot about the Church, but also about the Lord who stands at its helm. He is the Lord of all, without being a respecter of persons.

So this is good news for Björn Ulvaeus and anyone else who in the future fears that LDS politicians will attach religious fundamentalist principles to civil laws. This is both a foreign and an unwanted scenario even for Church members. Doctrine and Covenants 134 (which proved to be the conduit in the writing of Articles of Faith 11 and 12) makes this clear:

”We do not believe it is just to mingle religious influence with civil government, whereby one religious society is fostered and another proscribed in its spiritual privileges, and the individual rights of its members, as citizens, denied.” (D&C 134:9)

This is important to Latter-day Saints: religion has to be separated from state. If it was not, the religious rights as described in the Articles of Faith would be seriously compromised for countless of people. A nation’s leader has to be the leader for everyone, not just for a selected group of citizens. History is a grim reminder of that opposite fact.  Section 134 again:

”We believe that no government can exist in peace, except such laws are framed and held inviolate as will secure to each individual the free exercise of conscience, the right and control of property, and the protection of life.” (D&C 134:2)

Hence, in order to help create such a government that can ensure the rights of all its citizens, we should seek to elect to office ”such as will administer the law in equity and justice”. (D&C 134:3)

Finally, Doctrine and Covenants 134, this declaration of government and laws, which probably was penned by Oliver Cowdery, teaches us that those who exercise faith in God are responsible before Him in how they practice their faith, and that their religious opinions cannot ”infringe upon the rights and liberties of others”. (D&C 134:4)

This is the official doctrine of the Church, founded on the principles of love and respect, aimed at protecting life, liberty, and the pursuit of happiness for every man, woman, and child on this earth.

Again, I am proud to be a member of a church that so clearly stands for these divine principles. 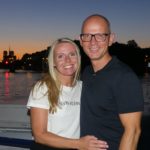 In his young adult years Louis Herrey worked in the music industry, winning the Eurovision Song Contest in 1984. After his service in the Utah Ogden Mission, he received a bachelor’s in teaching (Social Sciences). Brother Herrey’s first teaching assignment was at the Gothenburg International School, after which he was employed by the Church of Jesus Christ of Latter Day Saints as a Seminaries & Institutes Coordinator. He has held this position now for 21 years. Last year he also started teaching BYU Pathway Institute courses. Brother Herrey currently serves as a counselor in the Stockholm Sweden Mission and as a Primary teacher. He lives in Kungsbacka, Sweden. He is 54 years old and married to Angelica. Together they have 3 children.