Doctrine and Covenants 124 includes instructions to the prophet Joseph Smith to “show” selected others “the keys whereby [they] may ask and receive” blessings (D&C 124: 95, 97). This seems to be an allusion to “the key words, the signs and tokens, pertaining to the holy Priesthood” that are taught in the endowment (Brigham Young, Discourses of Brigham Young, sel. John A. Widtsoe [1941], 416).

As recently reaffirmed by President Russell M. Nelson, although temple procedures and presentations are adjusted from time to time to clarify meaning, the “temple ordinances and covenants are ancient” (The Temple and Your Spiritual Foundation).  This statement raises the question: Is there any evidence of such ancient ordinances and covenants?

What follows is a very brief overview of some of the historical evidence.

END_OF_DOCUMENT_TOKEN_TO_BE_REPLACED

I originally thought I was done with the archaeology section, but while I was going through my sources to figure out which ones I wanted to use this week, I came across a presentation by Neal Rappleye from a FAIR Conference a few years ago that I’d forgotten existed. Neal Rappleye, for those who don’t know, is one of the hard-working team members at Book of Mormon Central, and his presentation is entitled “Put Away Childish Things: Learning to Read the Book of Mormon Using Mature Historical Thought”. I felt very strongly impressed that I should highlight this presentation and discuss it with you guys before moving on to the next questions in the Letter. I linked to both the video and the transcript of the presentation, so you can choose the medium that best suits your learning style.

This talk is all about grappling with and overcoming the more simplistic narratives you were taught as a child and learning to understand that history is messy and incomplete, and how new discoveries and understanding can shift your perspective if you allow it to. It’s something we all need to do as we grow older, or it can lead to problems down the line when our assumptions are challenged.

One of the main flaws in Jeremy’s perspective is that he doesn’t do this. He rigidly holds onto the idea that things have to be exactly what he thinks they are, or they can’t possibly be true. He never allows for the possibility that his assumptions about various things might be what’s wrong, rather than those things themselves. We saw that last week, in his belief that the Hill Cumorah had to be the hill in New York and couldn’t possibly have been anywhere else (which is ironic considering the upcoming Vernal Holley map section), and we’ll see it again and again and again throughout the rest of the Letter. It comes up during the Book of Mormon translation section, the section about prophetic abilities, the Book of Abraham section, etc. He refuses to allow for the possibility that his assumptions might be wrong, and seems to believe that anything that doesn’t conform to those assumptions must be proof that the Church isn’t true.

END_OF_DOCUMENT_TOKEN_TO_BE_REPLACED

Dr. Peterson joins Hanna to talk about the upcoming feature film Witnesses as well as discuss some of the important historical issues surrounding the witnesses themselves. You won’t want to miss this interview or this film! As mentioned in the intro, FAIR’s conference is soon! Please look here for more details. 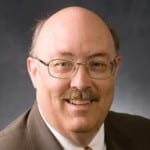 Please remember to see the film Witnesses! In this episode, Hanna talks with actors Caleb and Paul who play Oliver Cowdery and Joseph Smith respectively about what it was like to play these characters and to talk more about the film. Actor Paul described playing Joseph Smith as the role of a lifetime and actor Caleb was largely introduced to Latter-day Saint religion through this film. This conversation does not disappoint!

Program and other details available here.

TO SUBMIT QUESTIONS DURING THE CONFERENCE:

NOTE: The live-stream links will no longer be operational once the Conference finishes. We expect videos of the presentations to be available 6-8 weeks afterward. An update of the ‘Book of Moses Bibliography’ at https://interpreterfoundation.org/book-of-moses-bibliography/ will be made shortly after the conference. The combined proceedings of both conferences will appear in Fall 2021, as well as other new Book of Moses volumes. For updates, see http://interpreterfoundation.org/books/.

April 23-24, 2021
Presented by The Interpreter Foundation, Brigham Young University Department of Ancient Scripture, Book of Mormon Central, & FAIR
Due to the COVID-19 situation, this will be a live-streaming-only conference.

The live stream will be available here and on our Facebook page. 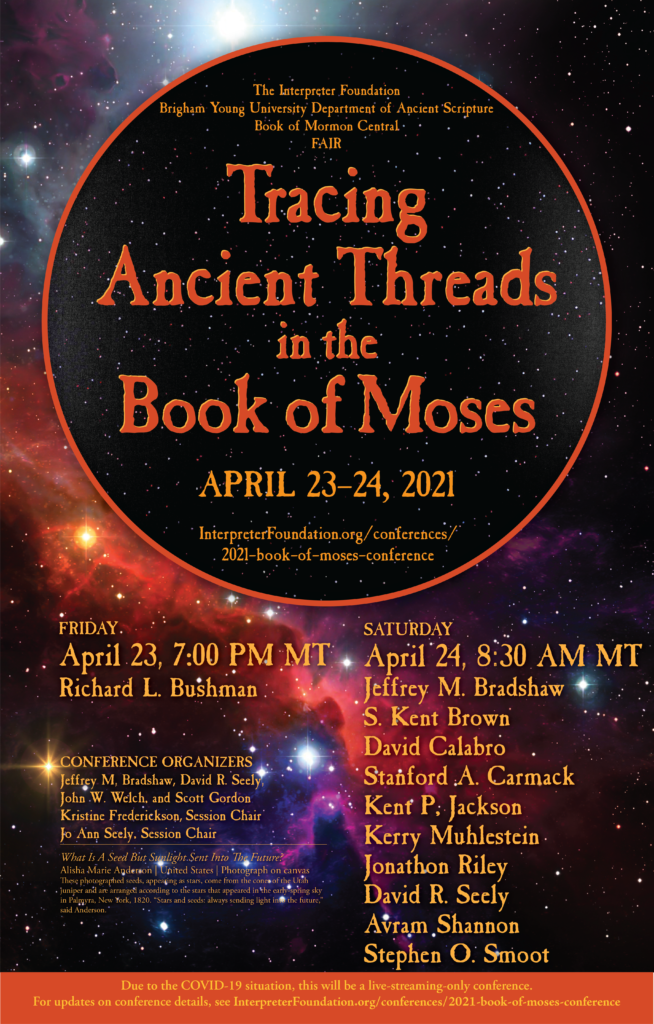 I was raised by two parents who loved science. My father was a biology teacher. He was a favorite at the high school, with lots of silly and whacky exercises that helped the students remember the material. I recall one phone call from a Yale university student who called to thank my dad for his help passing his Yale biology exams. He said that he just had to think back on the play they performed in his high school class when the students acted out the various parts of cellular mitosis. My father did try his hand at teaching college classes as well, but he said it wasn’t as much fun. He claimed he would try to crack a biology joke, but the college students would respond by dutifully writing it into their notes as if it were fact.

My mother was also a teacher. She taught grade school, and then later middle school. Her favorite magazine was Scientific American. Each month, she would read the magazine from cover to cover. She would read every single article. Then she would want to discuss it. Imagine my groan and eye roll as a 13 year old when she would start reading the latest article to me and state how it would change everything. Even as she moved into her 80s, she still read it. When I visited, she would want to talk about dark matter, gene splicing, or some other current science issue. She would also read to us as kids when we went on road trips to the coast, or over to Utah. We live in California. She wouldn’t read novels. No, she would read the latest psychology book, or book on mind science.

How Does Science Relate To My Faith? END_OF_DOCUMENT_TOKEN_TO_BE_REPLACED

In the coming weeks, Hanna will interview Biblical scholars about their thoughts on how the Hebrew Bible and Greek New Testament show important elements of the restored gospel of Jesus Christ. This episode provides some terminology and framework for how to move going forward as well as a much needed discussion on exegesis. She answers questions from viewers including a question asked by four different people at the end of the episode. Stay tuned for more interviews and get excited to talk about the Bible!

In a preview to the next episode on the Witnesses of the Book of Mormon, Hanna provides background information as well as sharing a favorite General Conference talk and answering your submitted questions. Please submit your questions for Hanna to [email protected]

Program and other details available here.

To Submit Questions During the Conference:

NOTE: The live-stream links will no longer be operational once the Conference finishes. We expect videos of the presentations to be available 6-8 weeks afterward. Freely downloadable drafts of the conference proceedings papers will be available within the ‘Book of Moses Bibliography’ at https://interpreterfoundation.org/book-of-moses-bibliography/ shortly after the conference.